With Trump gone and ratings dipping, US broadcasters will have to reconsider their corporate approach to news.

Those three main US news networks have enjoyed a roller-coaster ride over the past five years, thanks to one man, Donald J Trump. His presidency may have not been great for America, or for democracy, but it was fantastic for the news channels.

But now that the curtains are drawn on the Trump spectacle, the orphaned networks are bracing themselves for tougher times, dwindling revenues and deep identity crises. The major networks afforded Trump more coverage after he announced his candidacy in mid-2015 than any other candidate. They broadcasted his rallies and press conferences, live and unedited, enabling him to say whatever outrageous things he damn pleased.

It was good for business. Trump, the infamous trickster, whose false claims about President Barack Obama’s birthplace – aired on Fox News – propelled him to the national stage, understood from early on that the TV networks cared first and foremost about their ratings.

So, he went on attracting attention by making one controversial statement after another, to provoke, entertain and outrage. And the networks devoured his musings like hotcakes. The benefit was mutual, the synergy palatable. Even when the coverage turned critical after the 2016 Republican Convention, TV ratings and Trump PR continued to feed off of each another.

By the end of 2016, the networks had made billions and Trump had made it to the White House. From then on, the news broadcasters saw their revenues increase substantially as they focused mainly on Trump’s tweets, tales and tantrums. The president referred to liberal media as “the enemy of the people” and called CNN and other outlets, “fake news”.

THE BREAKING OF THE NEWS.

While the reporters felt threatened, the networks thrived. Their ratings rose and so did the profits, but the quality of their journalism declined. Reporting became poorer by the day, cheaply produced and quickly delivered, to keep up with the internet. Cable TV is called “medium”, so the joke went, because it is neither rare nor well-done. But the joke was on their viewers, Americans and others.

As journalistic quality dropped, CNN and Fox News became among the greatest profit generators for their corporate parents, and MSNBC began to catch up as well.

In 2018, the year after Trump took office, their revenues jumped by 4 percent to $5.3bn. CNN has generated an average of a billion dollars in profit annually for its parent company, AT&T, thanks to its coverage of Trump and other random domestic and international dramas.

As CNN celebrated its 40th anniversary as the first 24-hour news network, it claimed 2020 was its best year ever. And last week it celebrated its most-watched month, rising past its main competitors, Fox News and MSNBC.

Since the November 4 election, CNN has beat Fox News in total day viewership for the first time since December 2001. It was with this achievement in hand that CNN President Jeff Zucker chose to announce his long-anticipated departure. Having signed Trump for the Apprentice show in 2004 – which made the real estate mogul a household name – Zucker has proved himself a talented producer and savvy executive but, unfortunately, his approach to journalism has been driven by profit and expediency, not by inquiry and civic responsibility.

He infamously claimed that “the idea that politics is sport is undeniable, and we understood that and approached it that way”. In other words, Zucker has treated politics as if it is just a game focusing on “scoring points” not “making points”, focusing on the horse race, not the substance.

That has meant featuring the usual suspects among a limited selection of paid pundits and commentators who voice their “opinions”, unchecked and unedited, just like on the studio-based sports channel, ESPN. CNN and other networks have brought in the pundits to reaffirm or refute whatever is said in Washington, instead of investigating factualness and implications for the general public.

Doing so, of course, would be costlier, as it would require extensive reporting from various parts of the country and the world. It is journalism by opinion and conviction, not by inquiry. Needless to say, corporate news media are expected to run as “businesses” and they have done so under the likes of Fox’s Roger Ailes long before Zucker showed up on the scene. But Zucker took the corporate logic to a whole new level at CNN, raking in billions at the expense of serious journalism.

The corporate “bottom line” pressures that Ailes and Zucker advocated have long made journalists unhappy with their profession, with two-thirds believing such pressures were “seriously hurting” the quality of the news. Instead of covering real stories and reporting the facts, corporate media has been trafficking in outrage through punditry, hoping to attract more “eyeballs” on the cheap.

In his recent book, How America Lost Its Mind, Thomas Patterson, professor of government and the press at Harvard University, analyses in great detail how the cable networks rather irresponsibly have helped deepen American social and political tribalism. None achieved this more than Fox News, where dogmatic anchors have taken liberties with facts and logic and where the most outrageous TV hosts have been paid the highest, with Sean Hannity cashing in more than $30m in annual pay.

Once Trump was elected, the networks stopped whatever they were doing or saying in order to focus on his every tweet. Somehow, they always had lots to say about what little he said, whether in denunciation or admiration. Whether they saw him as a modern-day prophet or the devil incarnate, covering Trump had to be intense, theatrical, superficial and, of course, “Breaking News”.

This ran contrary to the vision of CNN’s founding executives who, more than 40 years ago, hoped to deliver a different kind of broadcast journalism. According to Lisa Napoli’s recent book, Up All Night, the founders of 24h broadcasting believed the news was not about what you say; it was about what you can show.

They believed that journalism is about investigating the merits and truthfulness of what is said and how it affects people. For them, it was about people and what they think, about “people’s power”, not the opinions of a few overpaid New York and Washington executives and anchors who are out of touch with the rest of the country and the world.

Take any of the questions polarising the country, from health care to climate change, and you will notice how these important issues are generally covered in a way that angers and divides and not in a way that informs and explains. CNN and MSNBC rightly focused on Trump’s lies, but they failed to explain why so many supported him anyway.

They focused on Trump’s exaggeration about the border wall but neglected to cover why so many vehemently opposed immigration, illegal or otherwise. They focused on the absurdity of Trump’s attempts at reviving coal energy but failed to convey the anger and frustration among working-class Americans. In other words, the networks found it easier and cheaper to pick on Trump’s fumbles and exaggerations than report, really report on the fears and anxieties of ordinary Americans.

But now that Trump is no longer “the gift that keeps on giving”, now that he is gone and may not be back at the White House for a long time, if ever, the networks are sure to struggle unless they find an alternative strategy. All three major news networks are projected to see their viewership and revenues dip this year. Even CNN’s impressive January ratings went down in the last week of the month, following the inauguration, signalling a downward trend in the post-Trump era. When veteran NBC anchor and author Tom Brokaw was asked what was his advice to TV journalists, he noted the obvious: They should get away from “the power centres”, travel to the rest of country, not just for visits, but to get to know the politics and the culture there.

This is a good place to start. It is high time to report on what people feel and think. As important trendsetters, the failure or success of American news outlets will have important ramifications for other cable and satellite news networks in America and the rest of the world. The latter, mostly state-run satellite news networks, broadcasting from various capitals to the rest of the world, are facing a different set of challenges that reflect badly on their journalism. But that is a topic for another day. 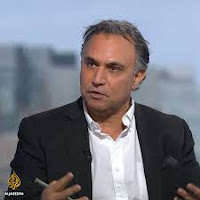 ABOUT THE WRITER Marwan Bishara, a Senior political analyst at Al Jazeera, was previously a professor of International Relations at the American University of Paris. An author who writes extensively on global politics, he is widely regarded as a leading authority on the Middle East and international affairs.