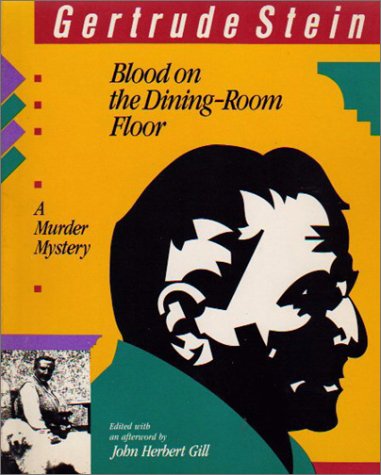 Editor’s note: Gertrude Stein wrote her only murder mystery in 1933 after she admitted she was a fan of detective novelist Dashiell Hammett. The real mystery of Blood on the Dining Room Floor, 1933, remains a modernist mystery as a story and a work.
FIVE WORDS IN A STEIN

GUEST BLOG / A literary essay by Craig Dworkin--We have never been able to read Gertrude Stein. This is not to say that we any longer lack good readings of particular passages and works, but that there is still no collective sense, on opening one of her books, of how to go about it word-by-word.

And as the theoretical and biographical writing about her continues to proliferate, the need to come to terms with those books themselves has become ever more pressing. Scholars have recently provided historical contexts, psychoanalytic frameworks, feminist perspectives, and a range of broadly staked claims for the importance of Stein’s œuvre, but they have very rarely given us any sense of how to proceed when faced with the specific language of her decidedly difficult texts.

I want to suggest a model for reading even Stein’s most restive works by complicating what has long been taken as one of her most accessible, and least significant, books: the unconventional (or in some ways hyperconventional) detective novel Blood on the Dining-Room Floor.

Like George Perec’s La disparition, Stein’s work is a mystery in which the clues — as well as the characters, victims and suspects alike — turn out to be the words themselves. Although parallels for some of the novel’s plot can be found in events during Stein’s 1933 stay in the French countryside near Bilignin par Belly (Ain), to read the work simply as a mannered autobiography “in which Gertrude’s visitors and neighbors are transparently present,” or as a dialogic pastiche in which “the major reader interest is not linguistic but generic,” fails to account for the text’s virtuosic display of graphical and lexical detail.

Whatever their strengths, such readings underestimate the importance of the bluntly obvious word-play that characterizes so much of Stein’s work. Readers of Blood preoccupied with conventional characters and plot — like the police detectives in Poe’s Purloined Letter — are looking in the wrong place and missing the real action, which turns out to be right before their eyes. Rather than pass over that word-play as too bald to be significant, one might read the facile paronomasia and textual transformations — such as “How do you cry about a crime,” or “Leave me and believe me” — as protocols for reading the text’s less evident, and far more subtle, effects.

In fact, one must read the surface of the text in order to access those biographical referents of Blood that otherwise remain unnoticed by readers distracted by the more transparent and obvious allusions to Bilignin (which accounts, perhaps, for why no one has noticed the significance of Stein’s wonderfully lurid title for a work in which neither blood nor dining rooms appear).

Stein herself was particularly pleased with the title, and its reference is worth considering. During her stay in the countryside that year, Stein seems to have been preoccupied with recollections of the break with her brother Leo. Retracing that break, Gertrude would also surely have recalled her former salon friend, and the person who — much to Gertrude’s dismay — had rented her Italian villa to Leo and his lover: Florence Blood. As the title’s encrypted referent illustrates, Stein’s reader would do well to heed her repeated enjoinders in Blood to “listen carefully” and to “see what I mean.”

Against a refrain of “do you understand[?],” these injunctions might be understood not just as nagging taunts to the reader of a flagrantly inconsistent and incoherent plot (the exact crime, much less its solution, is indefinitely withheld), but rather as cues to stop, look, and listen to the specifics of the language itself. Since such details so frequently suffer in the face of the larger claims made for Stein’s work, I want to demonstrate the microlevel workings of Stein’s language by following five of the novel’s words as they circulate through a fluid textual economy, moving rapidly and simultaneously along lines of reference, history, sound, and visual form, and translating fluently between different languages and registers.
To take one of Stein’s recurrent c[l]ues and “read the beginning again,” the novel opens: “They had a country house. A house in the country is not the same as a country house.” Obvious perhaps, but the qualification would only make sense in an uninflected language such as English. In an inflected language like the German of Stein’s childhood, the words would be distinguished — locative from genitive (or their equivalents)

A case in point: half of Chapter Eleven advertises Stein’s facility with a case based language like Latin: “Marius to Mario I think easily.” Since the story at hand is itself in fact a (detective) case, let us keep an eye out for motives, or at least for motivations. A few sentences later the first characters are introduced: “The first husband and wife were Italian.” “House,” in Italian la casa, is close by a vowel to “case” (caso). Apt, aptote. The villa (like Florence Blood’s Villa Gamberaria at Settignano), if not the villain, revealed.

Blood was composed in the autumn — the one season conspicuously omitted from the catalogue which opens Chapter Six. Another name noticeable in its omission is the surname of “Lizzy,” whom Stein directly addresses throughout the novel. “Borden,” possibly, which would invoke the legendary Fall River. Stein entitled a related work “A Water-fall and a Piano.” That piano (to which we’ll return) makes its ostentatious appearance in Blood as well; in the margin beside two passages its letters fall vertically down the page so that it is, quite literally, an upright “piano” (as in the “Piano” section of Stein’s earlier work Tender Buttons, “the place is the same as upstanding”).

In this grammatically attuned text, with its crime-story plot hinging on causation, these typographic appearances would no doubt be the instrumental case. A ghost of the waterfall survives as well in the description of the man who “had a cataract in one eye and nobody saw anybody cry,” where the falling water of the tear neatly balances the “cataract,” in its geological rather than ocular sense.

But the earlier work is not evidently a detective story, and the mystery, in this case, concerns a woman who falls through the casement of an open window. “A window has another spelling, it has ‘f’ all together,” Stein writes in Tender Buttons, reminding the reader that other languages could always be used (fenêtre, in French), and as the letters f-all together in Blood one might recall that Fall, in German, means “case.” A false lead, a trap (German Falle)? Remember that bodies aren’t the only things to fall: words decline (German fallen) into cases to indicate what is meant.

There is always a coincidence in crime.” What seems at first to be another typically enigmatic Steinian assertion turns out to make both the most literal and figurative sense in a novel that conflates the ‘crime’ of the woman’s defenestration and a series of adulterous affairs (a ‘fallen woman,’ in either case) when one learns that “coincidence,” from the Latin root cadere: means “falling in together.”

The opposite plays out as well, both with speculations on what will “relieve a crime” (Latin re + levare, “to raise again”), and also with the text’s contrast of “coincidence” with “succession” (directly from the Latin succedere “to go up,” from cedere, just a step from cadere). That same cadere, from casus, also gives us “accident” (German Zufall), as chance would have it; and indeed, the equivocating story suggests that the victim may have simply been somnambulating when she fell.

Cadere, significantly, is also the basis of “case,” as well as “cadaver” — what the fall leads to in both the narrative and etymological cases. Window her to widower. Casement to c[as]ement: “she fell upon the pavement of cement.” That change and ent chance (themselves so close) which moves from cadere to cædere (Latin: “to cut”), and again to “cement.” Cement, inevitably, to cemetery. Cement, which is to say, concrete. Like a fact, which is not, according to Stein, surprising. As she asks again and again: do you see what is meant? Given the work’s conflation of crime and infidelity, its musings on fathers and paternity, “cement” also stands in for the unspoken “semen” as well. French cream: ciment, seem, crim, crime.

The word recurs in a striking passage: “She played the piano and at the same time put cement between the keys so that they would not sound. You see how easy it is to have cement around.” If the earlier connection with “house” needed corroboration, the emphasized “around” might remind us that Gehäuse, in German, means “encasement.” Fenster, fenced her, encased her, casement, case meant.

The cement keeps the keys from “playing” in both senses, just as cases in linguistics keep a word from playing more than one role. One scarcely needs to mention the obvious: that part of the piano which holds the keyboard is the case.

But what might be the motivation for the seemingly mad act of cementing the keys?

Perhaps the solution is that cement is made with clay (Steingut, in German, interestingly enough), and that “to cement,” in German, is kleben. Both of which are homophones for a musical signature, or clef: the key in which the piano keys are (or in this case, are not) played.

Or that the key of that clavier (the text has never strayed far from “cadaver”) is graphically only a descender away from “clay” (and descending, or falling, is epidemic in this text of declensions — the same holds true for the vocabulary of “pavement” and “payment” which runs through the story).

In a work which is partially a roman à clef, this is yet another key to solving the mystery of an extended mediation on the occupation of one of the suspects, who happens to be a cook, which is to say, in the Bilignin setting, un chef. But that leads us onto a different course.

Indeed, one could continue to follow the footprints of the words in Blood, shadowing them through changes of disguise, tracing their secret histories (etymology), and attempting to reconstruct what Jean-Jacques LeCercle calls the “violence of language.”

No ledge, knowledge, watch your step. But the mystery remains unsolved, the case never closed, because language is always guilty of conversions, covert distributions, and all-too-graphic dismemberments.

The words have been clues all along and in plain sight. Indeed prints are all to the point — not only for the detective but also for the poet. In its closing moments, Stein’s book blows its cover, so to speak: “It made its impression. Not only which they sew.” Printing (impression) and binding (sew) might remind us of the bibliographic register of keys and cases: typewriters and printing presses.

Is this a slip-case (like the one in which Blood was first issued, letterpressed and hand-sewn)? Blood, sang, song, chant, chance. The facts and nothing but.

Author’s note: Just to make sure: my title references “Five words in a line,” the self-reflexive sentence with which Stein describes her typical manuscript line — a combined product of her large handwriting and small notebook pages — and to which Joseph Kosuth also alludes in his eponymous sculpture “Five Words In Blue Neon.” First published in 1948 (New York: Banyon Press).