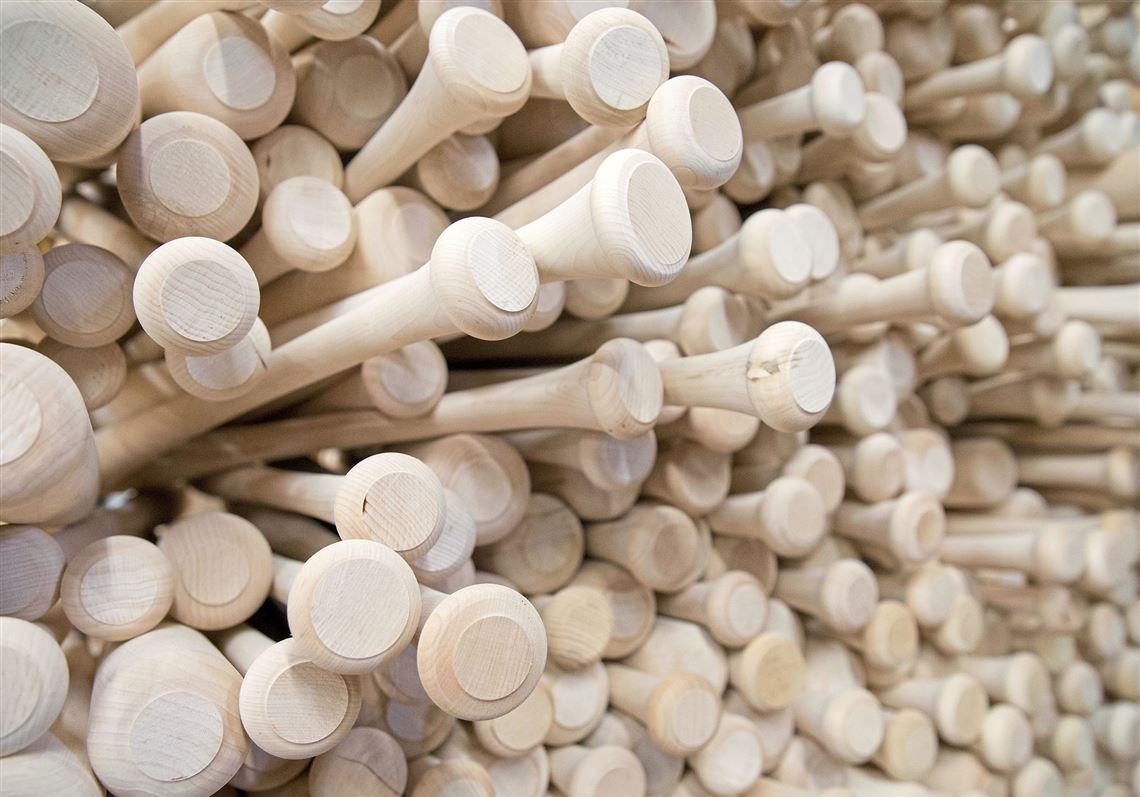 In the meanwhile here’s an article on just one of the many baseball bat makers in the U.S.

Homewood Bat Co. is one of them.

The crack of a hardwood bat echoes through the Homewood Bat Company’s Pro Shop in Homewood, Illinois, twenty-five miles south of Chicago. Todd Pals, Homewood’s founder, is watching a customer try out one of the company’s custom hardwood bats in the pro shop’s indoor batting cage.

Behind him, more than a hundred game-ready bats hang on the wall, waiting to be sampled. Taking a few swings in the showroom is important for the players that choose Homewood. “The ability to try out the bat is what sets us apart. A lot of our customers may have never swung a wood bat before,” Todd says.

The models might look similar, but there’s a lot of subtle variation. “More goes into selecting the right bat than you’d think.” Homewood Bat customers can pick from a large variety of models, lengths, weights, colors and engraving.

This process leads to a bat that is distinctly theirs. Some models have steeply tapered handles and other are straight to the end knob. There are many different barrel sizes to choose from as well. "We have over 400 bat profiles programmed into our CNC lathe”

A professional bat starts with top-grade lumber. Homewood’s shop is lined with 37-inch dowels of ash, birch, and maple, sorted into bins by weight. “The manufacturing process starts with getting the best wood possible,” Todd says. “We buy the highest grade available, then we grade it again.” Any dowels with knots or an uneven grain are set aside for use as ornamental trophy bats; Homewood’s game bats are made from the most flawless cuts of timber. “Selecting the wood is actually the most time-consuming part of the manufacturing process,” Todd says. The bat must be capable of withstanding a full season of violent collisions with 95 mile-per-hour fastballs.

In the shop, Todd takes care to keep the dowels conditioned. “The bat has to have a significant amount of moisture in the wood, which lets it flex with the shock,” he says. “So we control the climate and introduce mist and water to keep the moisture content in these dowels stable.” Todd picks up a maple dowel and examines the grain. “This is a lighter piece,” he says, pointing to the number on its end. “It’s 87.8 ounces. About two-thirds of that wood will be cut off by the machine, so this will become a lightweight bat.”

In recent years, players have been moving towards lighter, more agile bats. “With pitching being so fast right now,” Todd explains, “players need a bat they can easily control.”

Once the right dowel has been selected, Homewood’s computer-controlled lathe makes quick work of shaping the bat. “This lathe cuts the bat in a single pass and sands it on the return,” Todd says. The machine spins the dowel rapidly as its cutting arm glides down the length of the wood, effortlessly cutting the round blank into a precisely tapered bat. “Once it’s cut, we examine the wood again,” Todd says. “We check again to make sure no new knots or splits appeared in the grain. If it all looks good, we’ll cut off the ends with a band saw and take it to our finishing room.”

In the finishing, bats receive a protective coating. “This system is quite easy,” Todd says, pointing to a row of PVC pipes filled with lacquer. “We dip the bat completely in the tube and pull it back out.” The MLB only allows four colors on its bats, but players can choose any two-tone combination. “In this case, we’re going to put on a medium natural finish,” Todd says. “That’s our most popular finish.”

He slides the bat onto a long conveyor, where over a hundred bats are curing. “It’s going to dry overnight, then we’ll sand it down, apply our sticker, and put on another coat of lacquer.” Once the finish has completely dried, an engraving machine will carve the player’s full name into the wood, making the bat a true custom piece.

After a final coat of lacquer, the bat will go back onto a lathe to be cupped. “This is the final step of the manufacturing process,” Todd says, watching the machine’s blade cut a shallow bowl-shaped indentation into the top of a finished bat’s barrel. The lathe scoops out a three-quarter-inch cut, removing almost an ounce of wood. “Cupping allows us to use a heavier, stronger piece of wood and take some weight out of the end to make it more swingable.”

For the Love of the Game

Homewood makes bats for players at every level. “A lot of players enter the wood market at age 15,” Todd says. While most high schools still use aluminum bats, wooden bat youth tournaments are gaining popularity. “Scouts like to see how a player can handle a wood bat. It’s a truer test of hitting ability.”

The majority of Homewood’s bats are destined for professional use. “The professional market is really wide,” Todd says. “You might think of the Big Leagues, but for every MLB team, there are seven minor league affiliates, plus the independent leagues. Chicago has such a great baseball tradition,” Todd says. “And it’s the players that really drive us to be our best. We’ve built a relationship with these guys, and I love seeing them succeed with our bats.”

Homewood is based in the Chicagoland area and its not a surprise many players with ties with the Cubs and White Sox use Homewood bats such as Yolmer Sanchez, Wilson Contrearas, Victor Caratini and Mike Tauchman. Learn more at HomewoodBat.com.

About 60 per cent of Major League ball players use products from the following three bat makers: Marucci, Louisville Slugger and Victus. According to surveys led by baseball media like The Baseball Guide, Marucci is the most popular baseball bat brand used by Major Leaguers for 2021.

Nearly 26% of all Major League Baseball players come to the plate wielding a bat made by this popular manufacturer. Marucci makes signature bat models for popular and successful players like Buster Posey, Josh Donaldson, and Trae Turner.

Louisville Slugger holds the designation of Official Baseball Bat of Major League Baseball. Their bats are the second-most used among Major League Baseball players with just more than 18% of all players choosing a Slugger. They make a massive variety of bats using all types of wood including maple and ash which represent some of the most popular materials among the professional ranks. Some of the biggest names in baseball and rising young stars choose a Louisville Slugger such as Christian Yelich, Vladimir Guerrero Jr., and Ronald Acuna Jr.

The third most popular baseball bat brand in MLB is Victus (reportedly owned by Marucci). At around 15% of all players using a Victus bat, they hold a solid spot in the top 3 where these brands make up around 60% of all bats used in the top league.

Victus makes a smaller variety of baseball bats, however, they are trusted by some big-time sluggers like Gary Sanchez, Fernando Tatis Jr., and George Springer.

Aside from the three most popular brands above there are many more baseball bats used by Major League players such as those made by Mizuno and Rawlings.

Manny Machado. He swings bats by Rawlings and Marucci and on occasion a Valma MY13 from Mexico. 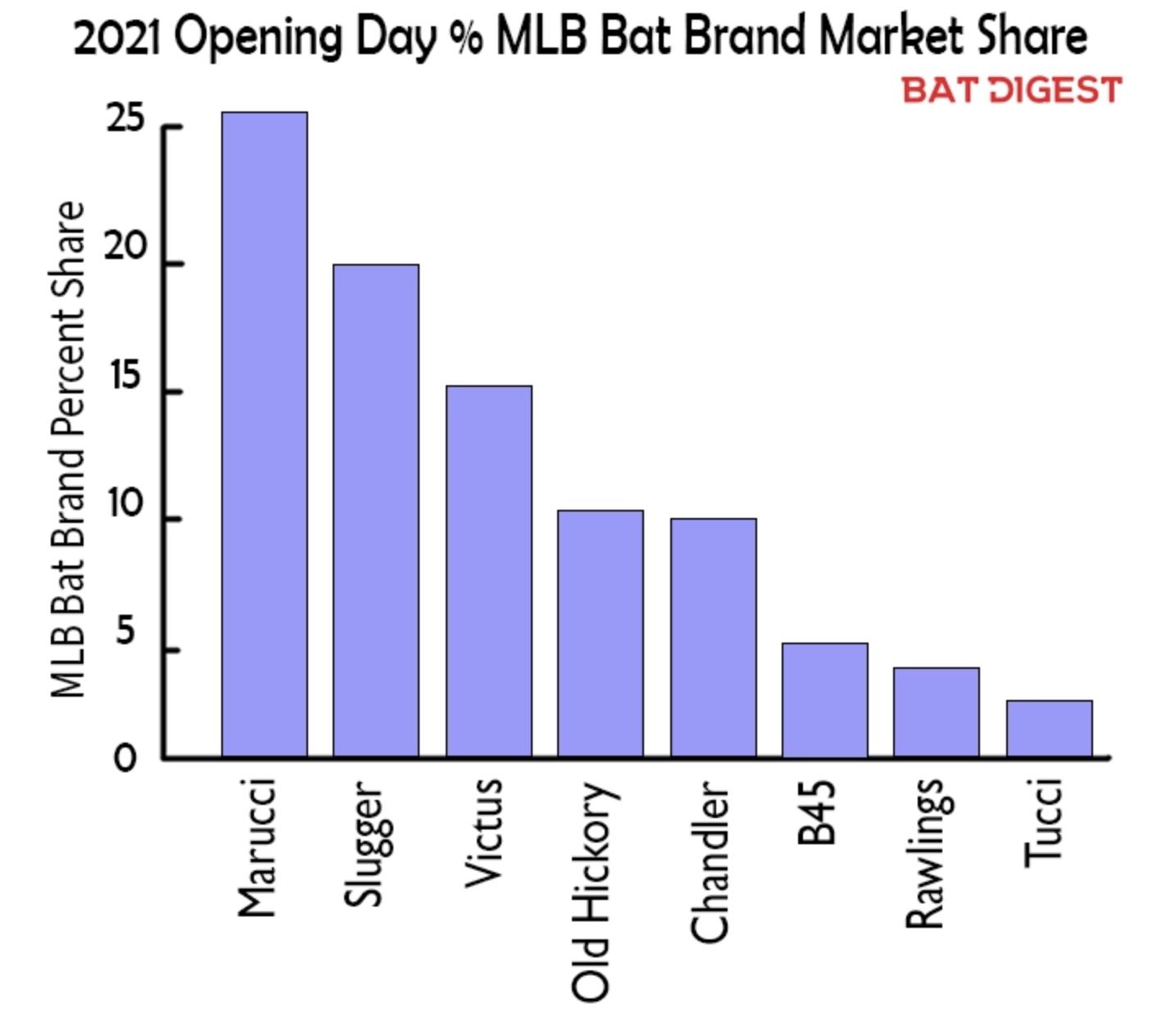