FRIDAY AT THE FRONT / WAR MEMOIRS DEPEND ON BEING ABLE TO REMEMBER WITH PRECISION.


World War II Memoirs: The Pacific Theater, Library of America’s first release of 2022, brings together the firsthand perspectives of three Americans who came of age fighting in the Pacific and who survived to tell their stories.

Remarkable literary achievements that capture history with the immediacy of lived experience, all three—With the Old Breed at Peleliu and Okinawa, by E. B. Sledge; Flights of Passage: Reflections of a World War II Aviator, by Samuel Hynes; and Crossing the Line: A Bluejacket’s Odyssey in World War II, by Alvin Kernan—are classics of the modern literature of war. 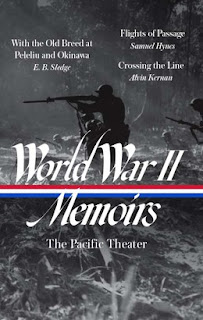 Editor of this new compilation is Elizabeth D. Samet, professor of English at the United States Military Academy at West Point and the author of Willing Obedience: Citizens, Soldiers, and the Progress of Consent in America, 1776–1898; Soldier’s Heart: Reading Literature Through Peace and War at West Point; and No Man’s Land: Preparing for War and Peace in Post-9/11 America.

Samet’s most recent title, published in the fall of 2021, is Looking for the Good War: American Amnesia and the Violent Pursuit of Happiness.