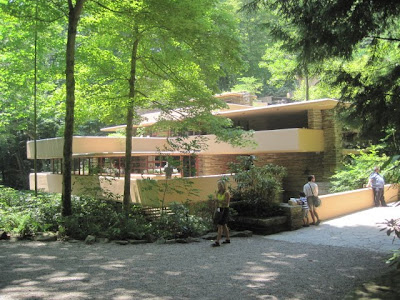 WRONG ABOUT WRIGHT-- As a young editor, I knew everything there was to know about the world. But for the past 25 years I’ve been picking up the pieces of that silly notion. For example, I dismissed Frank Lloyd Wright as more marketing genius than architectural guru. I confused the rake with the artist.

Then last summer, I visited Wright’s Fallingwater residence for the first time. I wanted to see for myself if the collective wisdom of the American Institute of Architecture was correct in naming Fallingwater the single most outstanding work of American architecture. I checked to see if National Geographic Traveler magazine had it right in designating Fallingwater, a residence designed for the Edgar Kaufmann, Sr. family, as a “place of a lifetime.”

Standing at that photo op spot, where most of us take that photo of Fallingwater, I came away with the realization that divorced from the woodsy locale, I’ve seen homes in San Diego that were on par with what Wright designed there in the Laurel Highlands section of south and west Pennsylvania. I pondered if San Diego architect icons like Robert Mosher (who reportedly studied with Wright at Fallingwater), or Jonathan Segal, Norm Applebaum, Homer Delawie, Lou and Jon Dominy, Rob Quigley, Kevin deFrietas or designer Wallace Cunningham had the waterfalls of Bear Run to work with ... could they have pulled of what Wright accomplished back in 1936? I’m curious what our local architects would have proposed for the Kaufmans, given the chance.

But then I realized what so many have known all along, the genius of Fallingwater is the fusion of man and nature, or as poet William Butler Yeats penned, “how can we know the dancer from the dance?” Fallingwater is beyond remarkable but only in the sense that Wright had to pull off the work of his lifetime to match the serene beauty of the woods, the boulders and the waterfall. Choosing precisely where to site that elegant simplicity of a home saved the day because anything less grand would have ruined such a magnificent wilderness. Architecture 101.
So, who gets top billing? Wright or nature? Is the genius of Fallingwater a who or a what? I’d say Wright was lucky to get a draw, but I can’t wait to return to Pennsylvania to catch the rematch.

When You Go:
From San Diego I like Southwest Airlines to Pittsburgh (or Baltimore). Rent a car. From Pittsburgh its a 90 minute drive; go southeast on I-76 (a.k.a. “The Turnpike’) to Donegal exit; follow signs on 381 south to Fallingwater Visitors Center.
Reservations (fallingwater.org) are a must; it’s always closed on Wednesdays. It is so green and shady a tour on the hottest day is still A-OK.

Cost is $20 per person. There’s a cafeteria-style café on site. The tour is guided by staff. No touching rare Wright furnishings. No photos inside, but exterior snaps are allowed.

One can overnight at Duncan House, a Wright designed Usonian-style home at nearby Polymath Park (polymathpark.com) but we stayed in nearby Uniontown at the Inne at Watson’s Choice one of the better scenic and managed B&Bs in Pennsylvania. Proprietor’s Bill and Nancy Ross are native to the area and know all the secrets (watsonschoice.com). They’ll hold your hand in sympathy if you showed up to Fallingwater on a closed Wednesday or didn’t make a tour reservation.