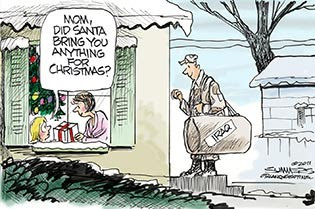 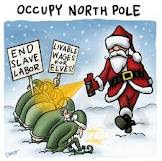 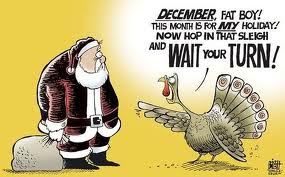 Political cartoons have become effective propaganda tools because they can galvanize public opinion over night. Who can ever forget how Pulitzer Prize winner Herblock’s relentless skewers on Richard Nixon during the Watergate Era?

One of my favorite coffee table books is “American Political Cartoons: The Evolution of a National Identity 1754–2010” by Steven Hess (Brookings Institute) and Sandy Northrop (PBS). The year old work points out “most” newspaper cartoonists aim to be fair albeit they are sometimes ruthless. Overall, political cartooning has become a delicious part of American politics and journalism proving once again the pen is mightier than the sword.

If I had a vote for 2011’s Pulitzer Prize in political cartooning it would go to Dana Summers of the Orlando Sentinel for the returning U.S. soldier. Simply, stunning in its bitter sweetness and pathos. The others on this page are remarkable as well in getting to the point with punch and pizazz.

Images: “Iraq:” by Dana Summers, Orlando Sentinel. Others shown in this blog are from the National Archives and Google images and not from Hess and Northrop’s work.