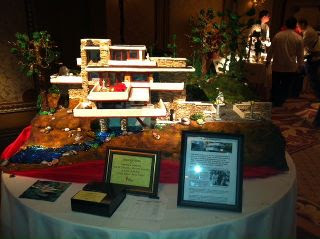 GUEST BLOG-- Amanda Benson’s following history of gingerbread has been making the rounds the holidays for good reason. It’s a delicious piece of writing. This year, it was forwarded to us by the team at Fixtures Living, who posted it from Smithsonian Magazine’s blog.

Tis the season to be gingerbread! The sweet-and-spicy treat flavored by a lumpy little root is a ubiquitous celebrity in fall and winter, starring in everything from cute cookies and overpriced lattes to edible construction projects. According to “The Gingerbread Book,” by Steven Stellingwerf (I want his job!), gingerbread may have been introduced to Western Europe by 11th-century crusaders returning from the eastern Mediterranean. Its precise origin is murky, although it is clear that ginger itself originates in Asia.

Gingerbread was a favorite treat at festivals and fairs in medieval Europe—often shaped and decorated to look like flowers, birds, animals or even armor—and several cities in France and England hosted regular “gingerbread fairs” for centuries. Ladies often gave their favorite knights a piece of gingerbread for good luck in a tournament, or superstitiously ate a “gingerbread husband” to improve their chances of landing the real thing.

By 1598, it was popular enough to merit a mention in a Shakespeare play (“An I had but one penny in the world, thou shouldst have it to buy ginger-bread…”). Some even considered it medicine: 16th-century writer John Baret described gingerbread as “A Kinde of cake or paste made to comfort the stomacke.”

Stellingwerf notes that the meaning of the word “gingerbread” has been reshaped over the centuries. In medieval England, it referred to any kind of preserved ginger (borrowing from the Old French termgingebras, which in turn came from the spice’s Latin name, zingebar.) The term became associated with ginger-flavored cakes sometime in the 15th century.

In Germany, gingerbread cookies called Lebkuchen have long been a fixture at street festivals, often in the shape of hearts frosted with sugary messages like “Alles was ich brauch bist du” (All I need is you) or “Du bist einfach super” (You’re really super). As far as I can tell, Germans also invented the concept of making gingerbread houses, probably inspired by the witch’s candy cottage in the fairy tale of Hansel and Gretel.

North Americans have been baking gingerbread for more than 200 years—even George Washington’s mother gets credit for one recipe—in shapes that ranged from miniature kings (pre-revolution) to eagles (after independence).

These days, as The New Food Lover’s Companion (a lovely early Christmas present from my inlaws-to-be) explains it, “gingerbread generally refers to one of two desserts. It can be a dense, ginger-spiced cookie flavored with molasses or honey and cut into fanciful shapes (such as the popular gingerbread man). Or, particularly in the United States, it can describe a dark, moist cake flavored with molasses, ginger and other spices.”

Of course, when gingerbread cookies are shaped like everything from popular politicians to baby animals, polite consumption can be tricky. Is it barbaric to bite off the head first? Or worse to start by amputating an extremity? If you nibble on decorations first, does the plaintive voice of that character from Shrek echo in your imagination (“Not my gumdrop buttons! “) ?

Quick, Order Your Yule Log—Here’s a bit of urgent local foodie news for Yule log lovers. North Park Main Street’s blog reminds us Heaven Sent, 3001 University Ave., will only be selling its popular Yule log until closing on Saturday. All baked goods from Heaven Sent are made in house with love and only the finest and freshest ingredients are used.

The Yule Logs are Chocolate sponge filled with a delicious chocolate mousse and covered in chocolate whipped cream and decorated with meringue mushrooms, a chocolate almond bird's nest and chocolate leaves.

Frank Lloyd Wright inspired Gingerbread House was photographed by Mark McKinnon while visiting Gingerbread City Show. Mark knows this blog has a sweet tooth and he couldn’t resist sending this over because this gingerbread house was created in the shape of architect Frank Lloyd Wright's famous Fallingwater residence in Pennsylvania. And, kudos go to the creative bunch at the Epilepsy Foundation/San Diego for putting on the fun gingerbread event.