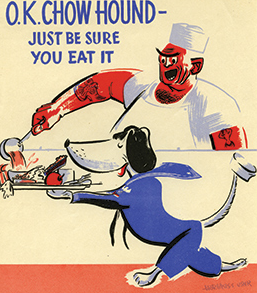 MESSY BUSINESS—On the hallowed grounds of a former Navy training facility turned shopping mall, is a new art exhibit called “Chow: Feeding a Navy.  It one time the facility was the largest mess hall ashore that fed sailors and staff simple meals from simple menus.

CHOW is part of a ten museum, year-long celebration of the military history of San Diego from Presidio to Pacific Powerhouse. 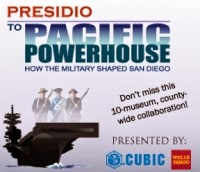 From the San Diego History Center: San Diego has been a military town ever since 1774 when it was officially made a presidio guarding the coast of California against the encroachment from other European nations like England and Russia. Built atop a hill, in what is today Presidio Park, Spanish soldiers lived with their families inside the fort, eking out an existence in defense of the Spanish Crown in the New World.

Throughout its existence, San Diego has been impacted in some way by the military’s presence and has benefitted from its proximity as well. Presidio to Pacific Powerhouse: How the Military Shaped San Diego is a nine-museum collaboration that tells the story of San Diego’s relationship with our military.

The San Diego History Center is the exhibition’s hub with nine other museums telling supplementary stories! Pick up a Tour of Duty Passport at The History Center and catch this exhibition at: