WHY DO WE SALUTE ROBERT HEFT ALMOST EVERY DAY? 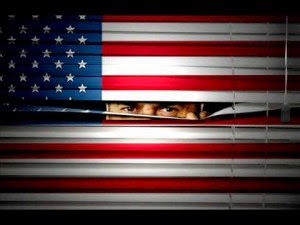 FLAG DAY EPIC—Being Flag Day, this blog found an old chestnut to share. During the Eisenhauer era, when Alaska and Hawaii were being considered for statehood, more than 1,500 flag designs were submitted to President Dwight D. Eisenhower by Americans.
The eventual winner was Robert G. Heft, a then 17-year-old living in Michigan with his grandparents. The teen participated in a school project to design the new 50-star United States Flag.
Young Heft un-stitched the blue field from a family 48-star flag, sewed in a new field, and used iron-on white fabric to add 100 hand-cut stars, 50 on each side of the blue field.  He was one of thousands to submit a flag design with alternating rows of five and six stars. But apparently he was the only person who actually stitched together a flag and shipped it to D.C.
Heft (Jan. 19, 1941-December 12, 2009) originally received a B- for the project. After discussing the grade with his high school teacher, Stanley Pratt, it was agreed that if the flag was accepted by the United States Congress, the grade would be reconsidered.          Heft's flag design was chosen and adopted by presidential proclamation August 21, 1959 after Alaska and before Hawaii were admitted into the union in 1959.  According to Heft, his teacher honored their agreement and changed his grade to an A for the project.
The original flag that Heft made is soiled and faded from frequent display. It has flown over every state capital building and over 88 U.S. embassies. An uneven patch at a lower corner is evidence of an attack on the embassy in Saigon in 1967.
So, when we salute Old Glory (at least since 1959) we in a small way also honor Robert G. Heft, a lifelong bachelor, teacher, college professor and mayor of a small town in Michigan.  And, proud American.

--It’s the law:  The U.S. Code, Title 4, Chapter 1, Section 8 (j) says “The flag represents a living country and is itself considered a living thing.”

--On April 4, 1818, an act of Congress provided for 13 stripes and star for each state, to be added to the flag on the 4th of July following the admission of each new state.  It was signed into law by President James Monroe.

--On June 24, 1912, an executive order of President William Taft established proportions of the flag and provided for arrangement of the stars in six horizontal rows of eight each, a single point of each star to be upward.

--Official colors: The colors of the flag are symbolic.  Red for Hardiness and Valor; White for Purity and Innocence and Blue for Vigilance, Perseverance and Justice.  The red, white and blue stripes are strictly defined as Dark Red (Pantone 193C), White (Pantone safe), and Navy Blue (281C).

--Civic holidays when the flag is prominently displayed: Memorial Day, Veterans Day, President’s Day, Flag Day and Independence Day.
-
-Only state governors and the President of the United States order when the flags on government buildings are to be set at half staff.

--When folded properly, the U.S. flag is shaped like a triangle with only the stars showing.  If you have exacting standards, it usually takes 13 folds to make the triangle.

--The first U.S. postage stamp to feature the flag as the sole subject was issued July 4, 1957.

--There two places the flag will flown half-staff: the battlefield and the moon.

--If the flag is flying upside down, this is a distress signal.
ONE FLAG DAY REMEMBRANCE--By Mike Dalka (http://www.usflag.org/)--My Grandfather was a glider infantryman in WWII, an advisor in Korea, and lost one of his sons, my uncle Gary Edwards, in Vietnam. I worked in his auto repair station during high school and he flew his flag in front daily.

One day while I was sweeping the oil dry out of the bays it began to sprinkle rain. He told me to go get the flag and I said "gimme a second."
He said, "It is raining, go get the flag NOW."

Well I popped off my mouth about how he should cool it, it isn't going to melt or some such typical teenage comment.

My grandfather is the toughest man I've ever met. He explained once that he thought basic training was some sort of country club during WWII, because he was used to hard work anyway, and at home he didn't have indoor toilets or hot running water!

And when I said whatever it was that I said to him, he turned deep crimson and I thought, "God save me, he's going to kill me for talking back."

Instead tears welled up in his eyes and he squeaked out "You don't understand what this family has paid for the right to fly that flag."

Then he turned his back on me and went out and got the flag. I just stood there feeling like the smallest person to ever live.

Those words cut me so deep. I wish the entire country could have heard them.

IT NEVER TOUCHED THE GROUND--Second Battle of  Ft. Wagner, July 1863. The men of the Federal 54th Massachusetts were hailed for their valor. William Carney, an African-American sergeant with the 54th, is considered the first black recipient of the Medal of Honor for his actions that day in recovering and returning the unit's U.S. Flag to Union lines. Their conduct improved the reputation of African Americans as soldiers, leading to greater Union recruitment of African-Americans, which strengthened the Northern states' numerical advantage.

After being wounded, Sgt. Carney saw that the color bearer had been shot down a few feet away. Carney summoned all his strength to retrieve the fallen colors and continued the charge. During the charge Carney was shot several more times, yet he kept the colors flying high. Once delivering the flag back to his regiment, he shouted "The Old Flag never touched the ground!"