RETRO FILES / THERE IS ONE U.S. HERO IN SOUTH AMERICA

After years of bloody warfare (1864-1870) between Argentina and Paraguay, the two countries were exhausted.  The battles had taken their toll.  What was being fought over was the rights to a section in southwest Paraguay that both countries claimed.  Both wanted the “Chaco,” a huge tract of land that is about the size of the U.S. state of Maine. 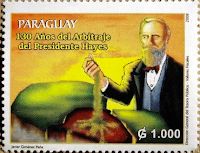 Unable to decide in war and equally stubborn at the negotiating table both countries looked for an arbitrator.  Representatives of both countries traveled to Washington DC, where they asked President Rutherford B. Hayes to decide.
The 19th President of the U.S. and a Civil War brevet general, Hayes decided in favor of Paraguay.
To this day, Hayes is a hero “down there.” You’ll find statues of him all over Paraguay.  The South American country has named schools, a province, a soccer team, postage stamp and the city of Villa Hayes after the American president, who served from 1877 to 1881.
“We are Paraguay because of him,” said Maria Teresa Garozzo, director of the Villa Hayes Museum.

Every 50 years Paraguay (population: 7 million) tosses a national fiesta in his honor.  The next one is in 2028 to book your reservations now.

And, the soccer team is named Club Presidente Hayes.  They play out of Tacumbu, a neighborhood of Asuncion, the nation’s capital.  The team’s nickname is Los Yanqui’s and it isn’t some fly by night outfit.  The team was founded in 1907 and they play in the Primera Division B.