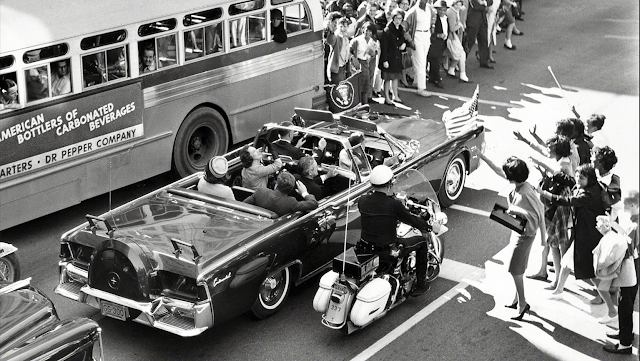 Among the thousands of photos in our nation’s Library of Congress in Washington DC is one haunting image of President Kennedy on that dark yet sunny day in Dallas minutes before he was assassinated.

It captures one moment in time.  It’s a photograph we all wish we could jump into and by some miracle we suddenly find ourselves in real time in front of the Presidential limo so we can wave our arms and scream at the top of our lungs: “stop the car, stop the car—for God’s sake STOP THE CAR.”

Instead all we have is the caption on that photo that appeared in the New York World-Telegram on November 22, 1963.   It remains chilling in its simplicity:

"Overview of crowds of people waving as President John F. Kennedy and his wife sit in back of limousine during procession through downtown Dallas, Texas; Texas Governor John Connally and his wife ride in the limousine's jump seats.”

And, after all these years later, we still ponder two things: why did they make places for the Secret Service agents to stand on at the rear of the limo and why were those special places empty on that day of days?

Who gave the order not to place agents on the rear bumper?