HAPPY NEW YEAR, MR. RHODE ISLAND
GUEST BLOG—By Dora Mekouar, Reporter, Voice of America--In general, Americans are generous people. So much so that 95 percent of U.S. households donate to charity, contributing an average of $2,974 each year.  See stats for givers vs. cheapos at end of this blog.

The United States comes in second (behind Myanmar) in the World Giving Index, with Americans giving more than $358 billion in 2014. Seventy-two percent of that amount came from individual donors.

“Giving has been part of our fiber since the beginning of our country,” Aggie Sweeney, vice chairperson of the Giving USA Foundation, told us back in June 2015. “Americans have always seen giving as an important part of what makes our communities work. In America, we’ve had a belief of taking care of our own and wanting to be able not to only have government take care of things, but to invest in what we feel is really important.”

But some states are more generous than others when it comes to donating time and/or money.

Residents in Utah, Mississippi, Alabama, Tennessee and Oklahoma are among the most giving Americans. Of all the U.S. states, residents in those states donate the highest percentage of their income.

States that give the lowest donated income include Massachusetts, Rhode Island, Maine and New Jersey, with New Hampshire coming in dead last.

To determine the most generous states, financial website WalletHub assessed the volunteer rate, percentage of the population who donated time and money, and the median contribution to charity.

When assessing all of the above factors, Utah remains the most generous state, while the least charitable state is Rhode Island. Rhode Islanders apparently give the lowest percentage of their income while also donating the least amount of their time. 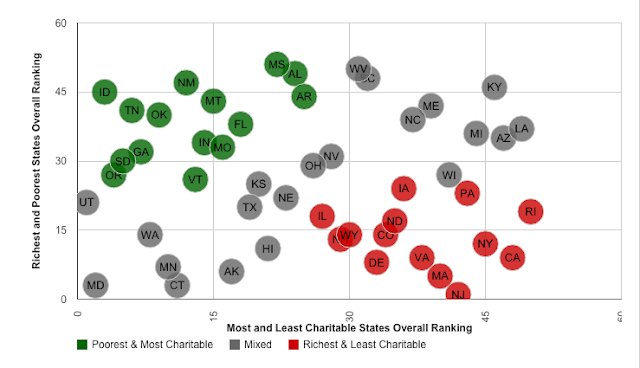