“There's virtue in truth, and there's truth in good wine!”
--Benjamin Cooke, British Poet circa 1770.
When Malbecs started showing up in bulk at American wholesale giants like Costco, you quickly figured out those delicious Argentine reds are no longer a South American secret.

Wine cognoscenti, who are forever sniffing out what’s new on the grapevine turned conversations to the rich Pinot Noirs from Patagonia as the next big deal from South America.  But, Pinot Noirs from that region of Argentina are no secret either.  Since 2014 alone, articles on the “Pat” noirs have appeared in cognoscenti wine media like Wine Enthusiast, Food and Wine, Decanter, New York Times and bloggers like Robert Parker, James Suckling, PillartoPost.org and Fabricio Portelli.

Garnering much of the current attention from that region is winemaker Piero Incisa della Rocchetta, who founded Bodega Chacra.  His foresight, skill and marketing have put his estate on the map. 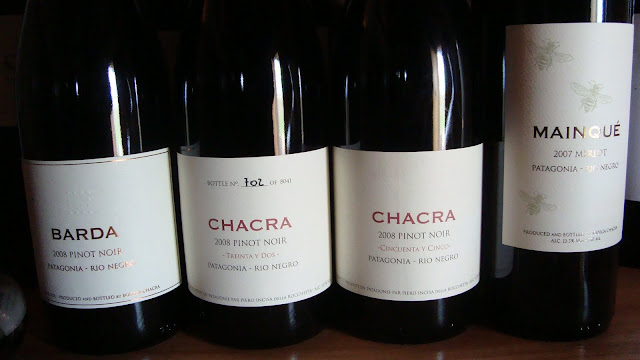 Speaking of maps, you’ll find Bodega Chacra is located in the Rio Negro Valley of northern Patagonia, 620 miles south of Buenos Aires, 1,240 miles north of Tierra del Fuego, and roughly equidistant west to east from the Andes Mountains and the Atlantic Ocean. The property's situation in the arid central Argentine desert is tempered by the confluence of the Neuquen and Limay Rivers, both of which flow from the Andes and converge in the Rio Negro, which in turn flows into the Atlantic. The Rio Negro Valley itself is a glacial bed 15.5 miles wide stretching 310 miles along the river's banks at an elevation of 750 feet above sea level. The valley is irrigated by a network of channels excavated in the late 1820s by British colonists who observed the abundant snow melt flowing from the Andes and created an oasis in the middle of the desert.

The climate is dry, with maximum humidity of thirty percent and an average of seven inches of rainfall annually. This aridity, coupled with the natural barrier of the surrounding desert, results in a complete absence of phylloxera and vine diseases. The air is pristine and without pollution, creating tremendous luminosity and purity of sunlight. During the ripening period, in the first quarter of the year, diurnal temperatures vary widely, ranging from an average of 82.4F (28C) during the day and 48.2F (9C) at night. The seasons are precisely defined, with hot summers, cold winters and mild springs and autumns. This consistency of climate enhances consistency of the wine from vintage to vintage.

In 2004, Piero Incisa della Rocchetta purchased the first of Bodega Chacra's vineyards, a property with an existing, though abandoned, vineyard planted in 1932. This singular vineyard of gnarled Pinot Noir vines, planted on their own rootstocks, is head trained and produces tiny bunches of small, concentrated berries. The vineyard's pale, dry, porous soils are dominated by gravel and coarse alluvial pebbles with significant limestone content. Irrigation is carried out at most five times during the vine cycle, with a single copper sulfate treatment. A green harvest in January reduces the already small yield, so that at harvest each vine produces at most five small clusters of grapes collectively weighing roughly a pound. The fruit is collected by hand into small boxes in the early morning hours during the first week of March. The process of harvesting with these small boxes, each of which holds only eight kilos of grapes, is more tedious than using large containers, but it prevents the fruit on the bottom from being bruised. The grapes are refrigerated on the way to the winery to preserve the freshness of their fruit, and then hand-destemmed, sorted and placed in 200-liter lined cement vats for fermentation.

No mechanization is used at any stage of the production process. The berries are placed whole, without crushing, in the fermentation vat, where the weight of the grapes near the top of the vat crushes some of those at the bottom of the vat. This method, which shares similarities with carbonic maceration, allows the wine to express the subtle, complex and finely textured tannins characteristic of very old vines. Fermentation is initiated spontaneously by indigenous yeasts, and lasts approximately three weeks at an average temperature of 78.8F (26C). During fermentation, a layer of carbon dioxide blankets the surface of the cap, which is neither pumped over nor punched down.

Once the alcoholic fermentation is complete, the wine is transferred off the skins into small French oak barrels in the most gentle manner possible, by gravity, without pressing or filtering. Barrels from three different barrel makers in Burgundy are used, of which only twenty percent are new. The tight, fine grain of Burgundian oak minimizes oxidation and restrains transfer of oak characteristics to the wine. Malolactic fermentation begins spontaneously once the wine is in barrel, and is completed in roughly six months. A small amount of free sulfur is then added to kill any stray yeasts or bacteria, and the wine remains undisturbed on its lees for a total of approximately twelve months in barrel. Bottling takes place around the first week of June without fining or filtration. The objective is for the oak, the fruit and the nuances of the soil to marry perfectly so that influence of the wood is nearly imperceptible in the wine, and the vine and "terroir" are expressed to their fullest.

Since acquisition of the 1932 vineyard, Piero Incisa has discovered and purchased two other old vine Pinot Noir vineyards which will produce two further Bodega Chacra single-vineyard wines beginning in the 2006 vintage. The first, from a vineyard planted in 1955, will be called "Cinquenta y Cinco." The second, from vines planted in 1967, will similarly be called "Sesanta y Sete." A fourth wine, called "Barda" ("The Ridge"), will be produced in later vintages. Conceived in the idea of a second wine, it will be a blend of components eliminated from the single-vineyard wines as well as wine from a recently planted, ten-acre vineyard on the original 1932 property.

In mid-2005, ground was broken for a new winery at the site of the 1932 vineyard. Heusch Architects have designed an elegantly simple, sandstone structure in complete harmony with its desert surroundings which allows complete control over the winemaking process through gravity. At a maximum capacity of 100,000 bottles per vintage, the winery is scaled to fit a hand crafted production from three of the most extraordinary and unique vineyards of Argentina.