THE CLUB SANDWICH AT THE DORCHESTER

Editor’s note: Each issue British Airways “The Club” magazine publishes as a regular feature a club sandwich recipe contributed by a world class chef.  BA is kind to share the recipe with bloggers.  In its November 2015 edition Chef, author and TV presenter Ken Hom has worked and eaten at many of the world’s best hotels and restaurants during his culinary career. Yet despite eating club Sandwiches (with plenty of twists) across the globe, he maintains that simplicity is the key. Here’s his personal recipe.  Pillar to Post has added side trip information on Ken Hom and the posh Dorchester Hotel.

GUEST BLOG—By Chef Ken Hom--From my experience working behind the scenes, all good hotels strive to serve the best possible Club Sandwich, especially when it’s on their room service menu. It may be the only thing someone eats while they’re staying – so you want to make it good.

As a traveller, I’ve eaten Club Sandwiches all over the world – from the Mandarin Oriental, Bangkok to Le Manoir aux Quat’Saisons in Oxford. However, my all-time favourite is at The Dorchester in London. It ticks all the boxes, and I like to pair it with a glass of Laurent-Perrier Rosé Champagne.

The secret to the perfect Club Sandwich is the mayonnaise – it should be fresh. For my own twist, I’d make sure all the sandwich elements were as crisp as possible, from the bread and bacon to the lettuce.

Method
1. Marinate the chicken thighs in teriyaki sauce overnight.
2. Place the chicken thighs into a slow cooker for 4-5 hours until the meat is tender.
3. Remove chicken from the oven and leave to rest for 10 minutes.
4. To make the mayonnaise, whisk the ingredients together slowly, starting with the egg yolks and mustard.
5. Combine the mayonnaise with the spring onions, chives and chilli flakes.
6. Cook the bacon to a crisp under a hot grill.
7. Toast the bread until crisp.
8. Sprinkle the truffle salt and pepper over the tomatoes.
9. Slice the chicken.
10. Spread all the toast slices with mayonnaise and add a tomato slice to each.
11. Add the chicken and bacon to each layer and season.
12. Then add a cos leaf to each layer and top with the final piece of bread.
13. Serve with crisps. 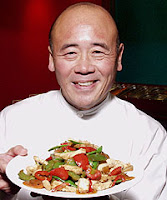 Ken Hom OBE is an American chef, author and television-show presenter for the BBC. In 2009 he was appointed honorary Officer of the Order of the British Empire for "services to culinary arts".
Born: May 3, 1949 (age 66), Tucson, AZ
Cooking style: Chinese cuisine
Education: University of California, Berkeley
Nationality: American, Chinese
Awards: James Beard Foundation Award for Who's Who of Food and Beverage in America 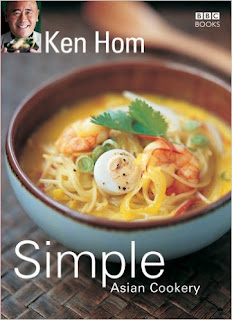 “Simple Asian Cookery, “is just one of more than a dozen popular recipe books by Ken Hom In it he explains the basic techniques needed to recreate 40 delicious dishes from the Far East. All the recipes are quick and easy to prepare, and the step-by-step instructions guarantee excellent results every time. The dishes include Vietnamese Crispy Spring Rolls with Dipping Sauce, Malaysian Black Bean Fish, Hot and Sour Indonesian Prawns, and from Singapore, Pork Satay and Traditional Steamed Fish. Complete with a menu planner, a guide to essential ingredients, and expert instruction from a master, Ken Hom’s Simple Asian Cookery round out every kitchen shelf. 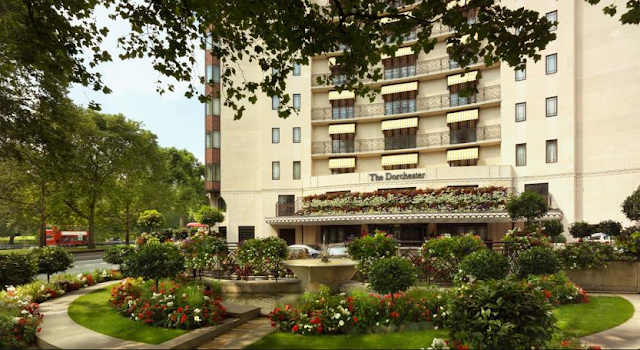 ABOUT THE DORCHESTER
The Dorchester hotel (opened in 1931) with its 5-stars is located on Park Lane and Deanery Street, London, across from Hyde Park. Brunei-owned, it considered by many one of the top hotels in the world.  Literary, film, rock stars, models, politicos and other notables have adopted the Dorchester over the years.

To this day, the hotel hosts literary gatherings, notably the "Foyles Literary Luncheons." which remains a current event.

Harry Craddock, one of the world's most famous barmen of the 1930s, invented the "Dorchester of London" cocktail here at the Dorchester Bar. A well-lit plane tree stands at the edge of the hotel in the front garden, and was named one of the "Great Trees of London" by the London Tree Forum and Countryside Commission in 1997.