GUEST BLOG—By Paul Gatsa, Director, Brewers Association--I woke up September 16 to news that Anheuser Busch-InBev (ABI) is working to acquire SABMiller. Discussion of this potential merger has been around for years. The first time I thought seriously about it was when Carlos Laboy spoke at a Beer Business Daily Summit in around 2009 about how it makes sense financially and fits the DNA of the bankers that put together Anheuser Busch-InBev.

There seems to be more credence given to the idea that it may actually get done this time. My understanding of the status is that Anheuser Busch-InBev confirms that it is approaching SABMiller about an acquisition of the company.

This post is not about whether it will happen, but about what can be expected here if it did. I find I have more questions than answers. I am focused on the U.S. picture and what it might mean for this market. I anticipate many interested parties will engage to help The Department of Justice (DOJ) evaluate concentration of market concerns. Regulators would be expected to require that the Miller component in the U.S. not be included in the deal for concentration of market concerns.

DOJ didn’t allow the U.S. absorption of Modelo without a selloff (to Constellation Brands-Beer Divsion), so it is hard to think that they would allow absorption of Miller.  That means that Miller brands in the U.S. could be sold off to MolsonCoors or other large international entities inside or outside of the current beer universe. Constellation Brands—Beer Division, Heineken or Carlsberg could all have some interest. There may be large money interests looking to get into the beer space as well, as beer at that scale generates significant cash flow and profitability.

My notes from Benj Steinman’s intro at the 2014 Beer Marketers Insights Spring Conference show that MillerCoors had an operating profit in the U.S. of just under $1.3 billion in 2013. That number will be very attractive to somebody. Who is willing to pay what to get it? I have also read today that Chinese regulators may have an interest.

There is always this tickler in the back of my mind when I think about MillerCoors that the companies involved entered into a 10-year joint venture in 2008. What are the details of that joint venture in the event of this potential deal? Does renewal of the joint venture become less attractive to MolsonCoors based on a new partner if they don’t get the Miller brands in the U.S.? 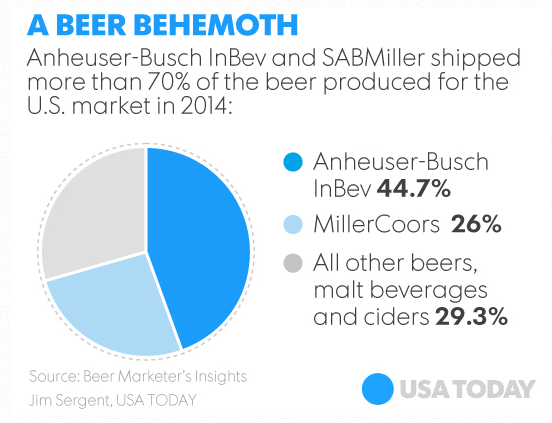 Does a potential joint venture with a new partner potentially bring different international brands into the picture creating an even larger? What happens with non-Miller-branded products owned by SABMiller that are imported into the U.S.?  What happens with a brand such as Leinenkugel’s, which was bought by Miller in 1988? Would the Leinenkugel’s brands be a required divestment or could that potentially become owned by Anheuser Busch-InBev?

In terms of impact on craft, my first thought is that most craft brewers operate in a different sphere—their communities and regions primarily. They serve the roles/purposes of being parts of and building communities.

Many craft brewers would look at a potential deal of Anheuser Busch-InBev and SABMiller as not relevant to their businesses and will keep on doing what they do—make flavorful and high quality beer, engage beer drinkers and serve the community through jobs, involvement and serving as a place for people to gather and discuss the events of the day.

The American public continues to respond by sampling more new craft brewed beers and buying more of their favorites. Those societal trends won’t change because of this deal. (Although there could be a danger of greater commoditization perception of beers in the same lager and light lager profiles if people think of the large brewers as being all the same company.)

Whenever there is a deal that impacts the U.S., one of the first things I think about is what will the impact be to the distribution network. Will brands change distributor houses or not? Since MillerCoors houses accelerated in consolidation at and after the turn of the century, it is hard to picture this piece unraveling, particularly if MolsonCoors becomes the owner of Miller brands in the U.S.

It is hard to see the retail landscape changing much because of the deal. Will it matter to the beer drinker? Can the beer drinker relate to news of a global megamerger about beer? There have been an increasing number of craft brewer transactions inside and outside of craft lately.

To what degree will this giant merger and other deals, some of which may impact beer drinkers’ relationships to specific brewers, impact perceptions of beer to where it becomes less of an item of personal passion or more of an item of personal passion? Will future transactions in and from the craft space hurt the brand of craft? Time will tell all.

Bottom line: “It is hard to see the retail landscape changing much because of the deal...” –Paul Gatza.

ABOUT THE AUTHOR:
Paul Gatza is the director of the Brewers Association (BA), a not-for-profit trade association whose purpose is to promote and protect American craft brewers and American craft beer and the community of brewing enthusiasts. Paul is a member of the association’s Brewpubs, Technical, Communications, Market Development, PR & Marketing and Government Affairs Committees.

Paul’s origin in the beer community started when he took up homebrewing in 1990. He worked on the bottling line at Boulder Beer and would sneak over to the brewhouse when opportunity allowed. He owned a pair of homebrew supply shops in Boulder and Longmont, Colorado from 1994 to 1998. He served as director of the American Homebrewers Association for 7 years and is in his 15th year as BA director. Paul is ranked as a National Beer Judge by the Beer Judge Certification Program. Paul is also a former judge director of both the Great American Beer Festival and World Beer Cup, before moving to the judge panels for these elite competitions.