TASTELESS PUBLIC STATUE FOR AN ASSASSIN

Opinion By Thomas Shess, Editor, PillartoPost.org--In our society/culture, it is high praise to have a statue of one’s likeness displayed in a prominent place.  The world honors its heroes with statues so future generations will reflect on the good those so honored achieved.

So it would seem in bad taste to see a statue of a callous murderer placed in a public place.

Even more ghastly is seeing that statue placed in a museum honoring the killer’s victim.

That would demonstrate on a daily basis amazing disrespect to the family of the fallen.

But surely that can be—can it?

At the Abraham Lincoln Presidential Library and Museum in Springfield, Illinois there are life-size representations of the Lincoln Family (wife and children) in the main lobby of the museum.  That’s to be expected.

But what is horrible is that in the same museum—in fact only a few feet away from the Lincoln family statues—there is a statue of Lincoln assassin John Wilkes Booth.  The statue of Booth was cast to depict the killer in a rather cavalier pose gazing at the Lincoln Family.

Not only is it eerie to see the figure of the murderer looming behind the President’s back, but it is totally disrespectful to our nation.

Of course, this is not new news.  The statue of Booth has been standing there a few years.  I only noticed it for the first time a few weeks ago while researching for a posted blog (Feb 9) honoring today’s anniversary of the President’s Feb. 12, 1809 birthday.

Frankly, I find Booth’s presence offensive and it ill-respects our nation’s horrific loss.  Polite history be damned. Booth should be remembered as a cold-blooded murderer. Having his wax museum image loitering inside Lincoln’s Presidential Library is an abomination.  Would this nation stand for a statue of Lee Harvey Oswald at the JFK Presidential Library?

Or, why not have a statue erected of the gunman who nearly assassinated President Ronald Reagan...there has to be room nearby.  Crass comment?  You bet, but so is having Booth’s image placed “as history” so close to the Lincoln Family in Springfield, Illinois.

Take down that statue.
##

Thank goodness the braintrust at the Lincoln Museum weren't in charge of the Reagan Library otherwise we might now see a statue of the President's assailant looming from behind the pillar on the right. 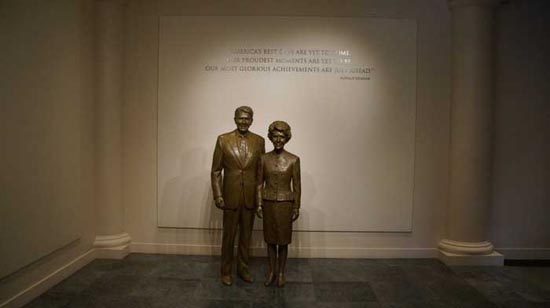