SAVE THE DATE: APRIL 24, 2016
Sixteen blocks of quiet, tree-lined streets, gardens, and quaint, adorable, and lovely Arts and Crafts homes make up Pasadena’s Bungalow Heaven, which are all waiting to be viewed and enjoyed during the 26th Annual Bungalow Heaven Tour on April 24.

Promoters point out although Gamble House is the most famous example of Arts and Craft architecture in the area, Bungalow Heaven A&C homes, illustrate the way ordinary families of the period lived.

Pasadena residents are rightfully proud of this architectural legacy.
At the beginning of the 20th century, “winter-weary mid-westerners” came to Pasadena for its weather and restorative resorts. Over time, news spread about the “hospitable climate” and people began to stay rather than visit.

As with most housing booms in our nation’s history, the new homes generally follow whatever architectural style is popular.  In the late 1900s and early 20th century Arts & Crafts architecture was in its heyday.

Arts & Crafts architecture first began in Europe, mainly England in the 1880s.  When it arrived in America the style took root in New England before it made its way West.

The craftsman style ethics of the movement were based on the mid-1800s writings of social thinker John Ruskin, an artist and prominent English art critic.

Ruskin’s writings also predicted social issues concerning environmentalism, sustainability and craftsmanship. Concerned that people were being numbed by thoughtless consumption of mass produced objects and lost to the beauty and spirituality of handcrafting from natural materials, Ruskin appealed for a revival of traditional craftsmanship.

William Morris, often called the father of the English Arts and Crafts Movement, was a Ruskin admirer, a socialist and an artist skilled at a variety of crafts. He took Arts and Crafts style ideals to a more general level, calling for social and economic reform through an integration of labor and art in society that would bring beauty as well as affordability to everyday objects and advance virtues such as simplicity, utility, honesty and nature.

Morris’ belief that architecture and decorative arts should be simple, functional, constructed of local materials, and, above all, beautiful is summed up best in his own words: “Have nothing in your houses that you do not know to be useful or believe to be beautiful.”

If William Morris was the father of the Arts and Crafts Movement in Britain, Gustav Stickley (1858-1942), a furniture manufacturer in New York, was the disciple who raised the banner in the United States. Stickley advocated Morris’ ideas in his magazine, The Craftsman, which he launched in 1901.

Stickley urged readers to build homes and craft furniture with their own hands using local materials, and he sold house plans, furniture and household objects by catalog.
The English antagonism toward industrialization was not as evident in America, where the machine was not an enemy but a tool with which to improve life, to reduce drudgery and produce simple, aesthetic, affordable homes and objects that were both decorative and useful. (Arts-and-Crafts-Style.com) 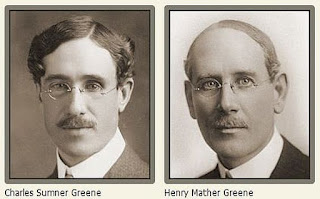 According to BungalowHeaven.org, architects Charles Sumner Greene and his brother Henry Mather Greene took the Arts and Craft style and bungalow architecture to “a whole other” level and today Arts & Crafts aficionados celebrate and inhale the marvelous details of A&C architecture that we admire and desire—wide, wrapping porches, French windows, river rock and clinker brick.

As for Bungalow Heaven itself, it was part of a boom that saw Pasadena’s population more than quadruple between 1900 and 1920 (from 10,000 to 45,000). Trolley lines soon ran up Lake Avenue into the foothills and eastward along Washington and Villa.  A neighborhood was born.

Devoted neighbors in Bungalow Heaven worked tirelessly to have the neighborhood gain historic status.  Event promoters of the BH tour salute those who spent approximately four years and thousands of phone calls, hundreds of meetings, discussions and hearings, petition drives, canvassing to make it happen.  Says bungalow homeowner Bob Kneisel, who hailed the achievement by adding it took knocking on “the doors of the 962 lots in the proposed Bungalow Heaven Landmark District several times” for Bungalow Heaven in October 1989 to be granted Landmark District status.