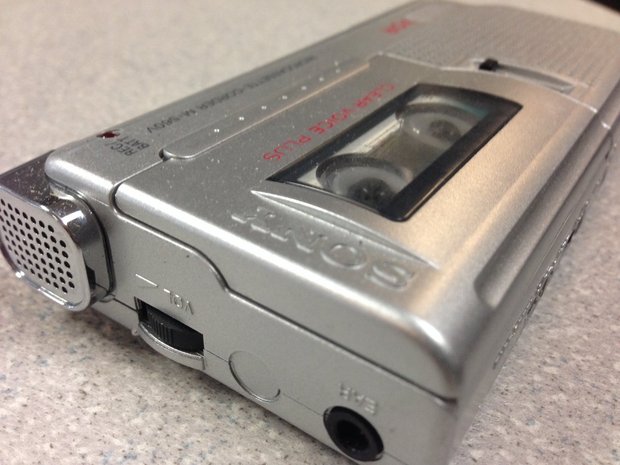 GUEST BLOG—By Richard Pietschmann—www.callmedick.com--When Gary Shandling died recently, I found myself thinking about his wonderful The Larry Sanders Show. But then,suddenly, Hey, didn’t I interview him? popped into my brainpan. I was a busy boy back then doing the journalism thing, and writing about the famous, semi-famous and not-quite-yet famous at such a rapid clip that I moved on quickly to the next. Had I really interviewed Shandling, or was that some celebrity fever dream?

That’s when I remembered the big plastic box of cassette and micro-cassette interview tapes that I hadn’t been able to part with. I found the box and pulled off the lid. Stacks of tapes stared back, more than 100 of them. Would Shandling be in there? I’d have to burrow in to find out.

Right on top were cassettes labeled “Ronstadt,” and that set my mind wandering back to a 1980s sit-down with the well-famous singer. It had occurred in the office of her manager, Peter Asher, which was on Doheny Drive in West Hollywood right around the corner from The Troubadour, the seminal music club where Linda had started her climb to renown. I had seen her perform there, barefoot on stage, several times. In the interview, I remember her telling me that she had moved to Marin County in Northern California and had a cow there named Luna. She was dating some governor. Some things you never forget.

Here are other memories from those old tapes:

There was Mil Batten, former New York Stock Exchange chairman. I sat in his huge Wall Street office in while the amiable West Virginian shared his views on many subjects. One was the impending breakup of AT&T, intended to erase its monopoly status and increase competition. Worst idea ever, Batten said. Why? Because the “Baby Bells” produced by the breakup would inevitably coalesce over time to form other near-monopolies, he said. That, of course, is exactly what happened. And one of them is now named AT&T.

I picked up a cassette labeled Robert Redford and recalled that we had once compared backgrounds–he wanted to hear about me first before talking about himself–and found that we had both lived as kids in Los Angeles’s Beverly Glen Canyon. Then I smiled and remembered that the actor and director had later called me at home to fill in some gaps in our discussion. My wife Patti picked up the phone and  asked the name of the person calling for me, and when she heard “Bob” Redford was on the line, the look on her face was as if she had just heard the word of God. It was a priceless moment.
I met Quincy Jones for lunch at at a favorite restaurant of his, Wolfgang Puck’s Chinoise in Santa Monica. The music producer did talk about his projects, including one with Michael Jackson, but mostly he talked about food.

My dubious inspiration for interviewing blue-eyed soul singer Boz Scaggs was to go on a saloon crawl with him in San Francisco, where he lived. It devolved into a long night of hopping between drinking establishments, in one of which we met a genial biker who told us he had that day changed his name legally to Joe Dirte’, pronounced Dir-tay. A couple stops later, after an unfortunate encounter for Joe in the Balboa Cafe, he ended up stuffed rear-first into a trash can, both legs and arms poking out. That’s where we left Joe, grinning up at us.

David Geffen has a fearsome reputation for ruthless business practices, but the billionaire music and film business entrepreneur has never been anything but cordial to me. Once we met for a luncheon interview in his Beverly Hills mansion, which he told me was actually rented from actress Marlo Thomas. His staff served us pork ribs, I recall, and afterward he promised that he’d always take my call. I’m keeping that in my back pocket until I need investors for my next can’t-miss inspiration.

For decades, Steve Allen was admired as a nonstop creative force in television, publishing and songwriting. His output was so prodigious it was easy to imagine he had little need for sleep. But the most surprising thing he told me was that he was worthless unless he had 10 hours of sleep every night.

Once I went on a road trip with the Los Angeles Lakers, during which I learned how boring such multi-city jaunts really were–grinding travel and hotel time punctuated by a few hours of game, usually every other day. In Atlanta, some players used the down time to go to a shoe store patronized by many NBA players. I remember Kareem Abdul-Jabbar and teammate Gail Goodrich sitting on the edge of a baggage carousel playing chess. During a team shoot-around on a practice court in Cleveland, I found an unused basket and was throwing up a few awkward baskets when I felt a presence behind me. When I turned around it was Kareem, staring down and me and shaking his head sadly.

Robin Williams always seemed a hyperkinetic whirlwind of energy and quips, as he was on the set of Mork and Mindy while I watched the show’s taping prior to our interview afterward. But when I was shown into his trailer later, Robin was slumped in a chair, exhausted. He was perfectly pleasant, but it seemed draining for him to simply answer questions, much less crack jokes. His performances exacted a tremendous toll.

Before I knew better, I assumed that classical music artists were serious and solemn even when not playing for an audience. James Galway set me straight about that. I met the flutist from Northern Ireland on board the long-gone small French ship Renaissance during a remarkable two-week classical music cruise in the Caribbean. Galway was one of the solo artists, who also included Daniel Barenboim, Maurice Andre’ and Gidon Kremer. The entire English Chamber Orchestra was also on board. From the first lunch at a big round table with several of the musicians, it was clear that classical artists knew how to kick back. One night gathered in a cabin and fueled by multiple bottles of good Champagne, Jimmy, Daniel and a few others grabbed their instruments and engaged in an impromptu jam session. I never looked at classical music the same way again.

Before I met Tom Waits in the seedy West Hollywood motel he called home, I thought the singer-songwriter-actor’s down-and-out persona was calculated. But I changed my mind when I entered his disheveled ground-floor apartment, carpeted from wall to wall in crushed beer cans. Pushed against one wall was the battered upright piano on which he composed such bleary paeans to drinking and disappointment as Closing Time and The Heart of Saturday Night. Even that distinctive gravel growl was authentic. When we went for a late-night drive in his pink Cadillac convertible many hours later, I understood how wrong I had been.

I didn’t know it at the time, but English artist David Hockney lived very close to us in the Hollywood Hills, our mutual canyon immortalized in his Nichols Canyon. It was close enough that I could walk to my interview with the acclaimed painter and collage artist. He couldn’t have been more pleasant. He let me into his house and introduced me to his beloved dachshund Stanley. He showed me his high-ceiling studio with its north-facing windows and unfinished works scattered around. We sat next to his backyard pool, its bottom painted in those trademark squiggles, and talked of California and England, of fame and privacy, of creative energy and ennui.
Yes, along with many others, Gary Shandling was there, too. I had interviewed him. But I can’t tell you a thing about it. Some things you never forget. Others you just can’t remember.