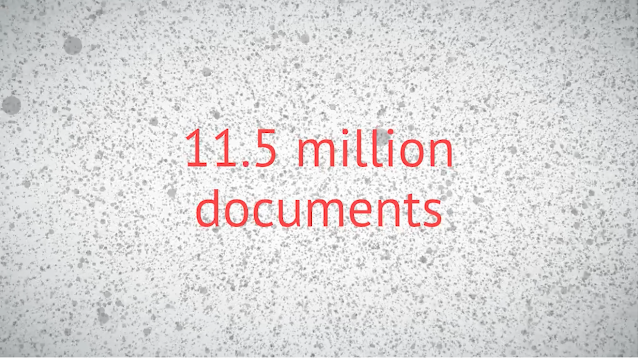 GUEST BLOG—By Chidanand Rajghatta from The Times of India.

Who leaked Panama Papers and why? Let’s pause and connect the dots in this world wide debacle of greed, nepotism and cover-ups.  Journalistic sources claim the Panama law firm leak is the biggest ever surpassing Daniel Elsberg’s Pentagon Papers in the 1970s and the Cableleaks by Wiki-leaks in 2010.

The name Mossack Fonseca, evocative of an arch Bollywood villain, broke like a thunderclap over many world capitals on Monday as a treasure trove of documents pointing to illicit foreign holdings, slush money, and corruption involving scores of world leaders, tycoons and celebrities was leaked from Fonseca files anonymously through a union of global investigative journalists.

Although graft, kleptocracy and nepotism is not new to most countries, the responses were predictable: It was all a grand conspiracy to undermine them and their countries. Why are there no leaders from the West except from Iceland was a question that erupted in several forums after Fonseca, the Panama-based law firm and corporate services provider, withdrew into a shell after asserting its operations were above board and broke no law.

Russia's government has dismissed Mossack Fonseca reports as unfounded and based on "Putinophobia" while 10 Downing Street refused to comment on information in the files which showed that British PM David Cameron's father, Ian, used offshore techniques to avoid paying UK tax. The PM's family said their investments were a "private matter". Iceland's PM Sigmundur Davio Gunnlaugsson announced on live TV that he will not be resigning. 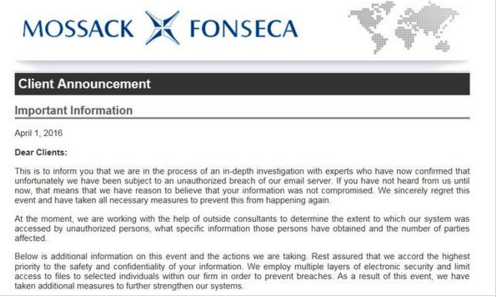 Conspiracy theorists dubbed it a "CIA false flag operations", pointing to the absence of any American in the list, and maintaining that the real corruption lay in NATO and the UN.

But who leaked the documents and what did they hope to gain from it?

According to the International Consortium of Investigative Journalists, (ICIJ), the lead for the leak came in late 2014 when an unknown source reached out to the German newspaper Suddeutsche Zeitung, which had reported previously on a smaller leak of Mossack Fonseca files to German government regulators. The source reportedly contacted Suddeutsche Zeitung reporter Bastian Oberway via encrypted chat offering some sort of data intended "to make these crimes public".

However, the source warned that his or her "life is in danger", was only willing to communicate via encrypted channels and refused to meet in person. "How much data are we talking about," Obermayer asked, according to an account in Wired magazine. "More than you have ever seen," the source responded.

The eventual stash added up to 2.6 terabytes, a 100 times bigger than Wikileaks' Cablegate, and enough to fill 600 DVDs. Obermayer says he communicated with his source over a series of encrypted channels that they frequently changed, each time deleting all history from their prior exchange.

In their Suddeutsche Zeitung report, Obermayer and his co-authors write that the source wanted neither financial compensation nor anything else in return, apart from a few security measures. To this day, Obermayer says he does not know the name of the person or the identity of the person who leaked the documents, but feels he knows the person. "For certain periods I talked to (this person) more than to my wife," he told Wired.

BIGGEST LEAK EVER.
From Wired Magazine: “...On Sunday, (April 3, 2016 more than 100 media outlets around the world, coordinated by the Washington, DC-based International Consortium, released stories on the Panama Papers, a gargantuan collection of leaked documents exposing a widespread system of global tax evasion. The leak includes more than 4.8 million emails, 3 million database files, and 2.1 million PDFs from the Panamanian law firm Mossack Fonseca that, according to analysis of the leaked documents, appears to specialize in creating shell companies that its clients have used to hide their assets.

“This is pretty much every document from this firm over a 40-year period,” ICIJ director Gerard Ryle told WIRED in a phone call, arguing that at “about 2,000 times larger than the WikiLeaks state department cables,” it’s indeed the biggest leak in history.

MORE ABOUT THE ICIJ (via its website: www.icij.org)
The International Consortium of Investigative Journalists is a global network of nearly 200 investigative journalists in more than 65 countries who collaborate on in-depth investigative stories.

Founded in 1997 by the respected American journalist Chuck Lewis, ICIJ was launched as a project of the Center for Public Integrity to extend the Center’s style of watchdog journalism, focusing on issues that do not stop at national frontiers: cross-border crime, corruption, and the accountability of power. Backed by the Center and its computer-assisted reporting specialists, public records experts, fact-checkers and lawyers, ICIJ reporters and editors provide real-time resources and state-of-the-art tools and techniques to journalists around the world.

Why does ICIJ exist?
The need for such an organization has never been greater. Globalization and development have placed extraordinary pressures on human societies, posing unprecedented threats from polluting industries, transnational crime networks, rogue states, and the actions of powerful figures in business and government.

The news media, hobbled by short attention spans and lack of resources, are even less of a match for those who would harm the public interest. Broadcast networks and major newspapers have closed foreign bureaus, cut travel budgets, and disbanded investigative teams. We are losing our eyes and ears around the world precisely when we need them most.

Our aim is to bring journalists from different countries together in teams - eliminating rivalry and promoting collaboration. Together, we aim to be the world’s best cross-border investigative team.

Mission.
ICIJ projects are typically staffed by teams ranging from as few as three to as many as 100-plus reporters spread around the world. These journalists work with counterparts in other countries and with our Washington, D.C., staff to report, edit, and produce groundbreaking multimedia reports that adhere to the highest standards of fairness and accuracy.

Over the years, our teams have exposed smuggling by multinational tobacco companies and by organized crime syndicates; investigated private military cartels, asbestos companies, and climate change lobbyists; and broke new ground by publicizing details of Iraq and Afghanistan war contracts.

Outreach
In addition to ICIJ’s in-depth reporting, the consortium plays a key role in bringing together investigative journalists from around the world. ICIJ reaches thousands of followers in dozens of countries with news on the latest reporting tools and techniques via:

Support System
The ICIJ is a non-profit organization. We give our work away for free. We rely heavily on charitable foundations and on financial support from the public. Without your help, we cannot exist.

Cross-border investigative journalism is among the most expensive and riskiest in the world.

ICIJ is also very grateful for the support of the Australian philanthropist and businessman Graeme Wood.

ICIJ welcomes individual donations in support of our work. You can make a gift online here. Any help, no matter how small, is most welcome.

Have a tip?
ICIJ encourages tip-offs from the public, story ideas, as well as outstanding investigative journalists interested in collaborating with us. Please don’t hesitate to contact us with your ideas.

MORE ON THE LAW FIRM AT THE HEART OF THE SCANDAL:
https://panamapapers.icij.org/20160403-mossack-fonseca-offshore-secrets.html?utm_source=email&utm_campaign=panamapapers-workflow&utm_medium=link&utm_content=b26cb41f67