Canadian-born, New Zealand-raised chef Anna Hansen heads up The Modern Pantry in London’s Clerkenwell. Last year she opened a second branch of the successful eaterie. Here she shares her thoughts on the world’s most famous sandwich

“I came across the Club Sandwich at an early age. In New Zealand I made my first one at primary school, with ham, mustard mayonnaise and iceberg lettuce.

“Recently I’ve been serving a Club Sandwich on our Afternoon Tea menu at The Modern Pantry. It’s really popular, so I’m often in the kitchen making them. The key ingredient is freshly baked bread. We use our za’atar (a Middle Eastern, citrusy/herby spice) focaccia, which remains soft and fluffy but holds up against the sandwich’s ingredients.

“Chefs love to be creative and a Club Sandwich is perfect for that. It allows us to keep pushing ourselves to create something new that still retains the basic elements. 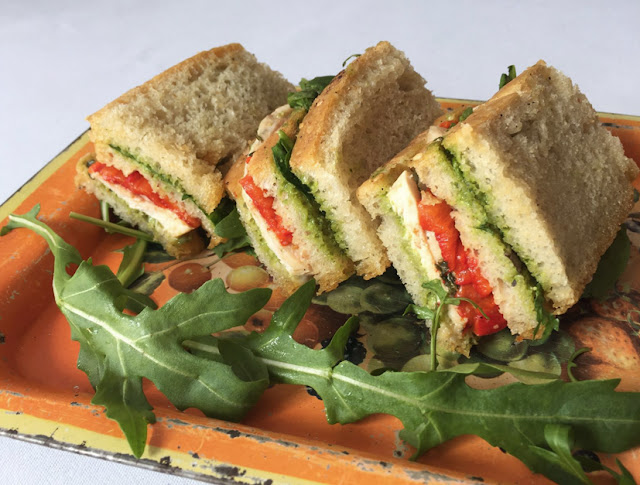 Handful of spinach or rocket leaves

For the wild garlic pesto:

Juice of a lemon

1. In the oven, roast the chicken breast with thyme, oil, salt and pepper until cooked through, approximately 30 minutes.

2. At the same time, roast the red pepper with a little olive oil, salt and pepper until soft, approximately 25 minutes.

3. To make the pesto, blitz everything except the olive oil in a food processor until roughly chopped, then trickle in the oil with the motor running until the desired consistency is reached. Season to taste with salt and pepper and more lemon juice if needed.

4. Mix the mayonnaise with the sweet chilli sauce to taste.

5. To assemble the sandwich, spread a thin layer of pesto on the bottom layer of bread and some mayo on another slice.

6. Slice the red pepper and chicken into strips and place on the bottom slice of bread. Then add the second slice of bread, mayonnaise side down.

7. Spread some more pesto on top of this slice then add baby spinach or rocket leaves.

8. Season with salt and pepper, spread a little mayo on the final slice of bread and place on top.