The original Ferris Wheel was designed in 1893 by a 33-year-old engineer named George Washington Ferris for the 1893 World’s Fair held in Chicago.  More than 100,000 parts went into that first Ferris wheel, notably an 89,320-pound axle that had to be hoisted onto two towers 140 feet in the air. Launched on June 21, 1893, it was a glorious success. Over the next 19 weeks, more than 1.4 million people paid 50 cents for a 20-minute ride and access to an aerial panorama few had ever beheld.  Media of the day called riding on the Ferris Wheel “an indescribable sensation...revolving through the air in such a vast orbit in a bird cage.”

New York Wheel LLC is run by President and CEO Rich Marin, a Staten Island based investment banker.  The success of the 483-foot tall “London Eye” on the Thames River has inspired the New York Wheel team.

Marin and his team will debut  the New York Wheel sometime in 2017.  The site is located close to the Staten Island Ferry terminal, facing the Statue of Liberty and the skyline of Downtown Manhattan.

The $400 million project is being built in the St. George area of Staten Island adjacent to a mega shopping mall—Empire Outlets—also under construction. Both projects are separate.  New York Wheel is designed by Perkins Eastman and S9 Architects.

The original Ferris Wheel was scrapped in the years after the 1893 World’s Fair.  In recent decades creation of giant Ferris wheel’s have become a fad.  China built the Star of Nanchang (526-feet) in 2006 and Singapore—not to be out wheeled—constructed the 541-foot Singapore Flyer in 2008.  The Las Vegas High Roller opened in 2014.

The New York Wheel will have 36 passenger capsules (which will be built by the Dutch company VDL Groep, each carrying up to 40 passengers, and a total maximum capacity of 1,440 people per ride. The developer adds the project expects up to attract upwards of 30,000 passengers per day or about 4.5 million per year.  A single ride is expected to last about 38 minutes. 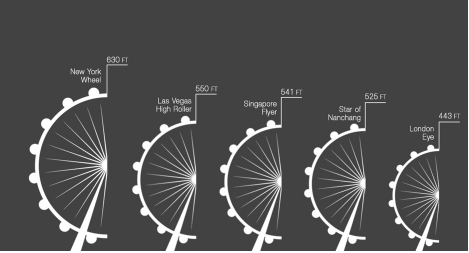