As part of Save Our Heritage’s Summer Silent Movie Sundays, there will be a showing of 1928’s “The Viking,” one of Hollywood’s first Technicolor silent film classics tonight at 7:30 pm. Details: The Viking definitely serves its purpose as a Technicolor showcase. It has a richer palette than most contemporary color films, getting closer to genuine blue for seas and skies. Cinematographer George Cave and perennial Technicolor consultant Natalie Kalmus hit a visual home run here... The Technicolor alone makes The Viking a must-see for film history buffs, but the film should still prove a visual treat for general audiences as well. -- Mondo 70: A Wild World of Cinema.

Leif Ericsson (Donald Crisp) leaves Norway to search for new lands west of Greenland. On the way he vies for the love of Helga (Pauline Stark) with his companion Egil (Harry Woods) and Alwin, an English slave (LeRoy Mason). More conflict arises when he stops at the colony of his father, Eric the Red (Anders Randolph) in Greenland, for Leif has converted to Christianity, which his father hates. He also has to deal with the unrest of his crew, who fear falling off the edge of the Earth. 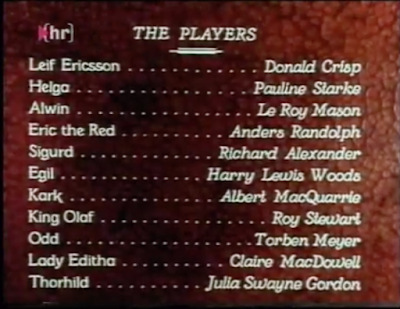