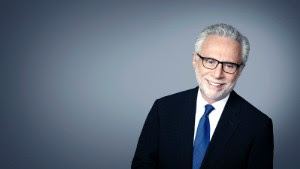 Blitzer is the 44th recipient of the award, which recognizes a journalist who has made significant contributions to the field of journalism.

“Through his more than four decades in journalism, Wolf Blitzer has served as the world's eyes and ears on some of the most important stories of our time, the embodiment of the Fourth Estate's first awardee, Walter Cronkite,” said Club President Thomas Burr, the Washington correspondent for The Salt Lake Tribune. “Wolf's dedication to the story and dogged pursuit of the truth, has been an inspiration for journalists, including myself who caught the journalism bug while watching his reporting during the first Gulf War. We are honored to rank Wolf among the winners of our most prestigious award.”

Blitzer began his career in 1972 with the Reuters News Agency in Tel Aviv. Shortly thereafter, he became a Washington, D.C., correspondent for The Jerusalem Post. After more than 15 years of reporting from the nation's capital, Blitzer joined CNN in 1990 as the network's military-affairs correspondent at the Pentagon. He then served as CNN's senior White House correspondent covering President Bill Clinton from November 1992 election until 1999, when he became the anchor of CNN's Sunday public affairs program, ”Late Edition with Wolf Blitzer,” and remained there for more than a decade.

“Wolf is a tireless journalist who has shepherded his audience through innumerable crises, wars and disasters,” said Barbara Cochran, president of the National Press Club Journalism Institute and a professor for the University of Missouri School of Journalism. "His deep knowledge of international and domestic affairs and his calm demeanor on air give his viewers the confidence that they are in good hands whenever breaking news occurs. He is also very generous in offering advice and encouragement to the next generation of journalists. As a newsman and role model, Wolf is very deserving of the National Press Club’s highest honor."

The Sept. 20 dinner is a fundraiser for the National Press Club Journalism Institute, the Club's non-profit affiliate, which defends press freedom worldwide, provides professional development and training services to the journalism community and scholarships to aspiring journalists.

More information about the Fourth Estate Award can be found at www.press.org/fourth-estate-award, or contact Julia Schoo at jschoo@press.org