The National Press Club based in Washington DC urged Ukrainian authorities to swiftly solve Wednesday’s murder of a prominent journalist in that country.

Pavel Sheremet was killed by a car bomb in Kiev as he prepared to head to the Vesti radio station, where he was to have anchored his morning talk show, according to news accounts.

A possible motive for his killing was not immediately clear. He had irked authorities in his native Belarus and in Russia before coming to Ukraine in 2014 to work.

“In the former Soviet states, it is increasingly difficult to practice independent journalism,” said Thomas Burr, president of the National Press Club. “The repressive tactics used against reporters are many and varied, and murder is sometimes one of them. Far too many of these killings go unsolved and unpunished. Sheremet’s case must be different.”

The National Press Club is the world’s leading professional organization for journalists. Through its Press Freedom Committee, the Club works to promote freedom of expression and transparency at home and abroad. The National Press Club Journalism Institute, a non-profit affiliate, equips news professionals with the skills to innovate, leverages emerging trends, recognizes innovators and mentors the next generation.
##

From Al Jazeera sources:
The 44-year-old was known for his outspoken criticism of the leadership of his home country, Belarus. He was also a close friend of Russian opposition leader Boris Nemtsov, who was shot dead close to the Kremlin last year.

Ukranian President Petro Poroshenko offered his condolences to Sheremet's friends and family, adding that he had instructed law-enforcement agencies to conduct "a speedy investigation into this crime".

An improvised explosive device was planted underneath the car, Zoryan Shkiryak, adviser to the Ukrainian interior minister, said in a Facebook post.

It was unclear whether the device had been set off by a remote control or a timer, Shkiryak added.

The bomb is believed to have contained up to the equivalent of 600 grammes of TNT.

Interior Minister Khatiya Dekanoidze said in televised comments at the scene of the crime that she would monitor the investigation herself.

"We are looking at all theories," she said, adding that solving the murder was "very important" as it was "a matter of honor" for the Kiev police.

Anton Gerashchenko, a member of parliament and adviser to the interior ministry, referred to the killing of Sheremet as a "cynical murder", adding that it could be used to "to destabilise the internal political situation in Ukraine".

In 2002, Sheremet won a journalism prize from the Organization for Security and Co-operation in Europe (OSCE) for his reports on human rights violations in Belarus, including the disappearances of opposition politicians and journalists.

In 2013, Sheremet began working for a new Russian broadcaster, Public TV and Radio (OTR), but quit in 2014 in protest at what he saw as the Kremlin's propaganda in coverage of the Ukrainian crisis.

Sheremet had told the Reuters news agency in October that he no longer felt comfortable visiting Moscow.

"I'm threatened often and given hints. Every time I go to Moscow, it's like I'm in a minefield," he said in an interview.

On Wednesday, the OSCE called for action to address the safety of journalists in Ukraine.


DEATH TO THE MESSENGERS  (Prior to Shermet's death) 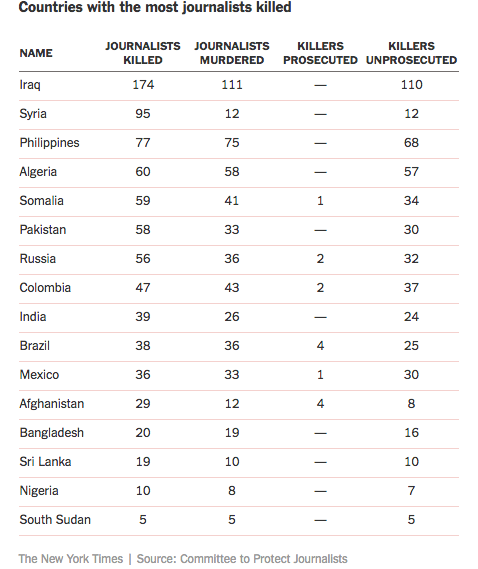