Swiping For Love in All The Wrong Places

Editor’s note: The following letter from Harvard Business School grad Justin McLeod, Founder and CEO of Hinge, first appeared in Hinge, the popular dating assistance app he founded in 2011.  It was also reposted in Medium.com in early Fall, 2016.

Exactly one year ago Vanity Fair magazine published ‘Tinder and the Dawn of the Dating Apocalypse,’ an expose on swiping apps, including Hinge, and the hookup culture they foster. Through a series of interviews with young professionals across the country, the author paints a picture of these apps having killed dating, relationships and romance, replacing them with objectifying games and on-demand sex where everyone feels dehumanized, disconnected and dejected.

While some apps defended themselves, we at Hinge couldn’t help but feel she had hit a nerve. Personally, I had to admit that when I started Hinge in 2011, this was certainly not the world I imagined. Taking this criticism as a moment to reflect, we began research that would reveal how alarmingly accurate its indictment of swiping apps was. 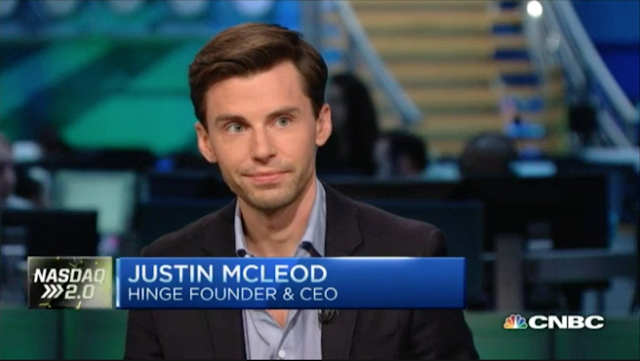 Swiping Keeps You Single
The first thing that we found was that swiping apps are staggeringly ineffective at helping people find relationships. Not everyone on these apps are looking for relationships, of course, but among those that are, only 18% have found even one relationship, ever. It’s hard to imagine any service staying in business where fewer than 1 in 5 customers ever found what they were looking for.

What became clear was that swiping apps are not ‘successful’ because they’re effective at helping users find relationships; rather they’re effective at maximizing user engagement (and therefore advertising revenue). Like a casino, a swiping app isn’t designed to help you win; it’s designed to keep you playing so the house wins. The most popular swiping app boasts that users login on average 11 times per day spending up to 90 minutes per day swiping, and have accumulated on average over 200 matches. However, for the vast majority of users this has led to exactly zero relationships.

There are four aspects of the swiping app’s design that orient the user towards engagement, not finding relationships.

1. Match-Centric Design: First is the focus on matching rather than messaging. When you open the app, the first thing you see is not the people you’re messaging with, but rather new people you should start swiping on. Then when you do match, you’re prompted to keep playing so you can find new connections rather than deepen existing ones. As a result, we’ve found that even on Hinge users spend twice as much time swiping as they do messaging. To quote Tinder’s CEO in a Time interview, “It doesn’t even matter if you match because swiping is so fun.”

2. Slot-Machine Interface: Second, the interface is designed to trigger the same neurobiological mechanisms as a slot machine. With every right swipe, there’s a moment of anticipation as you wait to find out if it’s a match. When it is, there’s an on-screen celebration giving you the feeling that you’ve won. This element of surprise creates a rush of dopamine that then quickly fades and leaves you wanting more. Perhaps that’s why users message back and forth with fewer than 10% of their matches. Just like a compulsive gambler at a slot machine, instead of taking their winnings off the table, they keep playing until they’re bankrupt.

3. People as Playing Cards: The third is the dehumanizing way people are reduced to playing cards that we flick to the left or the right — a majority of the time not even bothering to click in to see the user’s profile. This static, superficial representation of people leads to the pathologically objectifying way many choose to engage with the app, from snap judgments to crass pickup lines, often asking immediately for sex, nude pics, or worse. This model for engagement does not encourage investment in any one person, as everyone after a while starts to look and feel the same. Our research revealed that a majority of users don’t even remember the name of their last right-swipe.

4. All Things to All People: Finally, because swiping apps have a free, one-click signup and are advertised with a broad, open-ended use case, it encourages as many people to join as possible. This has gone so far now that a significant portion of swiping app users are reported to not even be single, much less looking for a relationship.
Essentially, swiping is an addictive game designed to keep you single. This is perhaps fine if you’re just looking to have fun, although there is growing research that indicates even in this case it’s neither fine nor fun, instead leading over time to anxiety and depression. Regardless, to call swiping apps ‘dating apps’ is a very unfunny joke at the expense of those looking for relationships — of which there are many. Currently when we ask Hinge users privately, 87% are open to a relationship, with 45% looking exclusively for a long-term relationship.

A World Without Swiping
While dating apps have become a pervasive phenomenon in our culture, they’re also a new phenomenon. They may have hijacked and thrown off balance one of our oldest, most central and most basic instincts as human beings, but it’s important to remember we’re likely very early in their evolution. Swiping and hookups may continue to stay relevant for some, but most of us will mature and moderate in response to our natural need for deep, long-term connection.

Although Hinge is already seen by our users as the most relationship-oriented dating app, 70% of them are now telling us they want something even further in that direction — though most are not willing to join the baby boomer generation on expensive, old-fashioned websites like Match and eHarmony. We believe technology has incredible potential to help people find compatible partners with which they can form successful relationships.

Given the current state of our culture, I believe it’s now more critical than ever that there exist a service that helps those bold enough to seek real relationships find meaningful connection, while still being accessible to the millennial generation. What became clear through our research was that swiping would never achieve that mission. This new service would have to break the mold.

At the end of 2015, despite the fact that Hinge was as big as ever and still growing, we decided to cut bait. Starting fresh, we embarked on what became a nine-month journey to develop that new service which would ditch swiping, matching, timers and games and replace them with a way to help people meaningfully connect.

New Service from Hinge
On October 11, this new service will launch on iOS in the US, UK, Canada, Australia and India. With it, we hope we can pave the way for a new normal in dating culture that treats people with dignity and helps those seeking relationships find what they’re really looking for.