Editor’s Note: This essay first appeared July 14, 2016 in New America Weekly, a publication of New America, an independent foundation and think tank. New America from its webpage www.newamerica.org shares its content with the public and blogs such as the one you are on now.  The essay was originally titled #FIXTHEDEBATES

GUEST BLOG / By John Donvan and Dana Wolfe**As individuals who know a thing or two about debates, we have two observations regarding the so-called presidential debates. One will be painfully obvious, while the other might seem a bit of a head scratcher – at first.

The obvious: since 1980, the presidential debates have never failed to disappoint. They’re awful.

The headscratcher: those every-four-year events could be a lot better if they were run according to the time-honored “Oxford style” format.
Why, if the latter is true, do we so readily accept the former? Because the ultimate arbiters of the debate rules have always been the candidates themselves – or their agents. 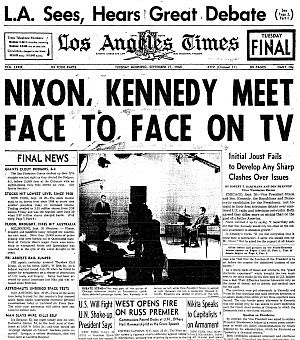 Yes, a Commission on Presidential Debates exists to sponsor, manage and set the terms for the quadrennial events. But the CPD officially answers only to the Republican and Democratic parties, which co-invented the CPD as a political duopoly in 1987. Jointly, the parties appoint its members, some of whom have served decades.

To be sure, most of these appointees have sought to fulfil the mission to mount debates that “provide the best information.” In practice, however, the shape of the CPD-sponsored debates has to be renegotiated every four years with the candidates of the moment, who also happen to wield a significant ace card: if one of them doesn’t like the rules, he or she can refuse to play.

Don’t think this is an idle threat. Pre-CPD, both Jimmy Carter and George H.W. Bush dropped out of debates when they didn’t like the setup.

This is why the debates are so “un-debate-like.” Candidates seek to turn them into 90-minute campaign ads, stripped of risk, spontaneity and, most critically, anything close to an intellectual joust. In years past, candidates have successfully imposed the following self-serving strictures on debates, among many others:

--a requirement that the debaters address only the moderator directly, but never each other
--a rule forbidding follow-up questions to any point made
--a blackout on showing facial reactions by an audience obliged to remain silent
--extremely narrow time limits on discourse, including 2-minute responses to questions asked by a moderator, and rebuttal periods as short as 15 seconds

That list shows why the rhetoric on the debate stage always feels so pre-cooked.  It is that way by design. The candidates go in with pre-written scripts in their heads – the kind that run two minutes or less (that is, short enough to memorize) – and then make damn sure to deliver on those  scripts -- and nothing else -- unhindered by challenge or interruption from an opponent, a moderator, audience reaction or the relevance of what they’re saying to the question that was asked. In short, actually debating is the last thing they want to do. And so, they don’t.

But debates should be for voters, not the candidates, which is why we’re launching an initiative urging the adoption of the Oxford style format for the presidential debates this fall. More than 1.5 million people have already watched our #FixTheDebates video, which explains the urgency of our campaign and what “Oxford-style” means.

The “Oxford style” would change the debate game dramatically. In an Oxford debate, the opponents are required to prove something. Constructed around timed rounds with both formal statements and robust interaction, the format hinges on a specific motion – an assertion – which the opposing sides argue for and against.

For example, Donald Trump and Hillary Clinton would take opposite sides on a motion like “Give Undocumented Immigrants a Path to Citizenship.” Or: “The U.S. Intervenes Abroad too Often.” Consider how much we would learn about the candidates’ worldviews, their ability to marshal both logic and facts, their powers of persuasion and skill at thinking on their feet -- if they were willing to debate this way. Imagine three such motions covered in a ninety-minute debate, and what that could reveal about who these people would be in office.

Okay, we know that’s a mountain of an “if.” No doubt, that kind of debate will be scary to risk-averse candidates who would now really have to know what they were debating about.

On the other hand, they could take some comfort, going in, from already knowing the questions being asked, because they would all be contained in the motions. And then, we wonder, might they be responsive to the idea of doing “Oxford style” if – who knows? – our petition keeps picking up signatures? To us, it’s interesting that a younger demographic – one all politicians covet – is finding our message via social media. They also make up a majority of the downloaders of the podcast we produce – a podcast that is comprised of nothing but debate in the Oxford style.  This tells us that they want substance.  So do we. Let’s keep asking for it. #FixTheDebates

ABOUT THE AUTHORS**
John Donvan is the host and moderator of the Intelligence Squared U.S. debate series.

Dana Wolfe is the founding executive producer of the Intelligence Squared U.S. debate series. Since 2006 IQ2US has produced over 120 debates available at www.iq2us.org.

ABOUT NEW AMERICA
New America is a think tank and civic enterprise committed to renewing American politics, prosperity, and purpose in the Digital Age. We generate big ideas, bridge the gap between technology and policy, and curate broad public conversation. Structurally, we combine the best of a policy research institute, technology laboratory, public forum, media platform, and a venture capital fund for ideas. We are a distinctive community of thinkers, writers, researchers, technologists, and community activists who believe deeply in the possibility of American renewal. www.newamerica.org