Alas, this PillartoPost.org posting was meant for June 16: Bloomsday. But time, tide, the Fates, plus a one on one with the Musette Procrastination and a pleasant dinner with our son delayed us.

Instead, our ode to Bloomsday appears today, June 17, the day after Bloomsday.

The following was brought to our attention via CraftLiterary.com, an online magazine exploring the art of prose. Yesterday, the site celebrated Bloomsday, the annual worldwide party toasting all things, James Joyce.

Leading CraftLiterary.com's fete is a pastiche of sorts, call it a review by the site's writer of the day Mark David Kaufman, who reviews “James Joyce and the Making of Ulyssess” by Frank Budgen [1882-1971].

GUEST BLOG / By Mark David Kaufman-- James Joyce once observed that he had included so many “enigmas and puzzles” in Ulysses that professors would be preoccupied with the book “for centuries”—an effective way, he added, of “insuring one’s immortality.”

Such remarks, along with what literary critic Hugh Kenner called “the copious and often futile literature that has grown up around the name and legend of James Joyce,” have inevitably resulted in an image of the novel, in the popular mind, as embracing complexity for complexity’s sake, an exercise in self-righteous virtuosity intelligible only to professional scholars who surrender their lives to deciphering its mysteries.

But this reputation belies what is arguably the central quality of both Ulysses and its author: a great and unflinching humanity.

This Bloomsday, June 16, as both Joyceans and the Joyce-curious around the globe gather (virtually) to toast one of the twentieth century’s most luminous literary personalities, we do well to reflect on the accessibility, rather than the obscurity, of the man and his creation.

There remains no better introduction to Joyce and his craft than Frank Budgen’s 1934 James Joyce and the Making of Ulysses, currently accessible for free through the University of Wisconsin’s online James Joyce Scholars’ Collection. [Link follows below]

personal portrait of the artist. Budgen, an English painter engaged in wartime propaganda work for the British Consulate in Zürich, first met Joyce in the early summer of 1918, and over the next year and a half frequently discussed the composition and progress of Ulysses with his drinking companion.

Joyce was remarkably open with the intelligent and sympathetic Budgen, and he continued to send the painter updates and manuscripts after relocating to Trieste and later to Paris, where the novel was published in 1922 [by Sylvia Beach]. A sampling of Budgen: For Joyce, writing—like marriage—did not come easily; it was a labor that required almost supernatural degrees of patience and dedication.

When Budgen asked his friend how the novel was coming along, Joyce revealed he’d been struggling all day over two sentences: “I have the words already. What I am seeking is the perfect order of words in the sentence.” Joyce’s remark brings to light one of the defining qualities of modernist art: an intense awareness of one’s medium, an attentiveness to the materiality and historicity of paint, clay, or language itself. Words are not simply conveyors of information. In the writer’s hands, they are living things, “quick with human history as pitchblende with radium, or coal with heat and flame…"

In addition to synopses of each chapter of Ulysses and a preview of Joyce’s subsequent “work in progress” (Finnegans Wake), Budgen provides a rare look at the man behind the myth.

He recalls, with painterly precision, his first sight of the lanky Irishman, whose walk “suggested that of a wading heron” and whose “heavily glassed eyes” caused him to navigate with uncertainty a darkening garden terrace. At once confident and vulnerable, the Joyce of Budgen’s memoir slowly emerges over the course of their many talks in local watering holes, like the Augustiner Restaurant, where the writer would invariably order white wine, and their leisurely wanderings around Zürich, particularly along the Bahnhofstrasse, where the chorus girls referred to Joyce as “Herr Satan” (presumably because of his goatee).

Here we find a Joyce whose writing is an expression of his own sense of the comédie humaine, a Joyce who would occasionally break into a “fantastic dance” for no apparent reason and who enjoyed a good joke, inspiring Budgen to pen what is surely one of the best descriptions of laughter in English letters: A laugh is a significant gesture. Joyce’s laughter is free and spontaneous. It is the kind of laughter called forth by the solemn incongruities, the monkeyish trickeries and odd mistakes of social life, but there was no malice in it or real Schadenfreude. His is the kind of laugh one would expect to hear if the president of the republic took the wrong hat, but not if an old man’s hat blew off into the gutter. 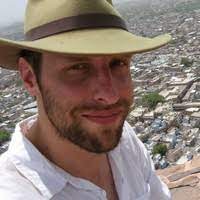 ABOUT THE AUTHOR Mark David Kaufman is an Assistant Professor of English at the United States Air Force Academy, where he teaches courses in writing, literature, and film studies. His work has appeared in The Public Domain Review, James Joyce Quarterly, Twentieth-Century Literature, Virginia Woolf Miscellany, The Space Between, and elsewhere. You can find him at markdavidkaufman.com.