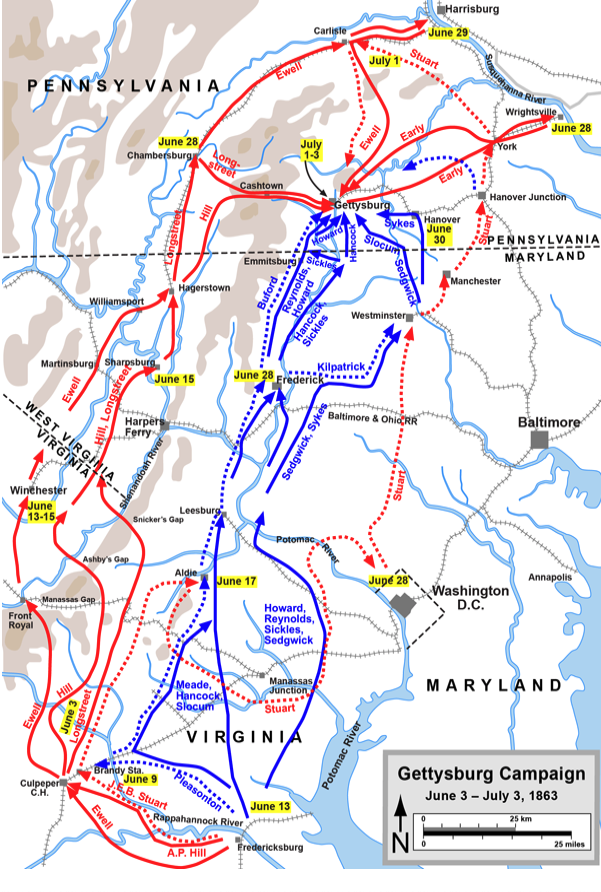 GUEST BLOG / By Daniel Welch, writer Emergingcivilwar.com--Twenty-four hours into his command, General George Meade showed no signs of hesitation and continued to push his army hard to bridge the large geophysical gap that had developed between the Army of the Potomac and the Army of Northern Virginia during Gen. Joe Hooker’s generalship.

The previous day, Meade’s orders had concentrated the army near Frederick, Maryland. Now, the orders for June 29 sent the army northward at a long and rapid pace. The left-wing under Gen. John Reynolds moved towards Emmitsburg, with only the Third Corps of the wing moving toward Taneytown.

The distance of the left wing’s marches all exceeded twenty-five miles. The other columns of the army had marches that were all long, hot, and challenging as well on the 29th. Soldiers in the Twelfth Corps marched during the day until they arrived near Bruceville, Maryland, not far from Emmitsburg and Taneytown.

To the south and east, the Second Corps, after a delayed start, spent the entire day on the road, arriving late into Uniontown. The Federal Fifth and Sixth Corps brought up the rear of the army. Although pushing throughout the day, the Fifth Corps ended their march south of Liberty, Maryland while the Sixth Corps finished their grueling day several miles to the north and east at New Windsor. Gen. Meade also had the cavalry busy as well. Gen. John Buford’s troopers moved to the west and north in search of the Confederate First and Third Corps. Gen. David Gregg’s command headed north and east in search of the Confederate cavalry under Gen. J.E.B.Stuart with additional orders to guard the flank of the Army of the Potomac. Gen. Judson Kilpatrick’s newly minted division was to head off in search of the Confederate Second Corps.

Both troopers in the saddle and infantry on the march remembered it as one of the most trying days of their time in the Army of the Potomac.

At the close of June 29, Meade had not only moved his army northward, but he had secured both wings of the Army of the Potomac. He had chosen an excellent location for his headquarters in Middleburg, Maryland, which placed him effectively midway between the far flanks of the army. From Middleburg, Meade wrote Gen. Henry Halleck in Washington his proposed plans for the coming day. “My endeavor will be falling upon some portion of Lee’s army in detail,” Meade noted, with “My main point being to find and fight the enemy.” The commanding general was also well aware of Stuart’s ride and raid in his rear, but, in order to proceed with his plans for the army that he laid before Halleck and Lincoln, “I shall have to submit to the cavalry raid around me in some measure.”

At the same time, Meade also worked on ordering his commands to prepare for the advance on the coming day. Meade’s orders for June 30 would take into consideration all threats by the Confederate army and be in line with his directives from Lincoln and Halleck. Meade placed his commands in a way to be able to march towards or protect Harrisburg, Baltimore, or Washington. With this in mind, the order of march for June 30 inclined the army to the northeast towards York, Pennsylvania. In addition, the lengths of marches were to be cut significantly. Meade’s army was wearing under the long marches, a number of hours on the road, heat, and dust. In order for the men to be in condition to fight well on the field of battle, Meade wanted to slow the pace of the campaign.

June 29 witnessed the first attempts by Gen. Robert E. Lee to concentrate his entire army since their entrance into Pennsylvania. According to Lee, “…on the night of the 28th, information was received from a scout that the Federal Army, having crossed the Potomac, was advancing northward and that the head of the column had reached the South Mountain.” With this intelligence, Lee called off Gen. Richard Ewell’s approach and plans of the Pennsylvania state capital at Harrisburg and ordered him to “join the army at Cashtown or Gettysburg.”

Lee also ordered his other two corps, Longstreet and Hill’s, to move towards the concentration point of the Cashtown-Gettysburg area as well. “Hill’s corps was accordingly ordered to move toward Cashtown on the 29th, and Longstreet to follow the next day,” recorded Lee in his January 1864 report of the campaign. As the main body of the Confederate army headed towards Chambersburg, Cashtown, and Gettysburg, General Stuart’s cavalry was on the move as well.

Stuart’s men continued their destruction of track and telegraph lines at Hood’s Mill. “The bridge at Sykesville was burned, and the track tore up at Hood’s Mills,” wrote Stuart. “Measures were taken to intercept trains…various telegraph lines were likewise cut, and communications of the enemy with Washington City thus cut off at every point.” Nearly all-day Confederate cavalry occupied the Baltimore and Ohio Railroad with continued operations in this area. By the end of the day, however, Stuart’s men moved on Westminster, Maryland, but, so too had Union cavalry.

Stuart had received intelligence that the Union army was concentrated around Frederick, Maryland, and, according to Stuart’s campaign report, “it was important for me to reach our column…to acquaint the commanding general with the nature of the enemy’s movements, as well as to place with his column my cavalry force.” To achieve this, Stuart’s troopers pushed on until reaching Westminster near 5 p.m. The column had had long rides. Stuart’s troopers riding from Brookeville had a 25-mile ride to reach Westminster, while those that left from Hood’s Mill had slightly less at seventeen miles. “At this place, our advance was obstinately disputed,” as elements of the 1st Delaware Cavalry under Major Napoleon B. Knight engaged advance elements of the Confederate cavalry column at Westminster.

A sharp but brisk fight took place down Main Street with the eventual scattering of the Union forces. Stuart and his men basked in the “Several flags and one piece of artillery” that were captured during and after the fight. After the brief encounter, Stuart sent out foraging parties, and, finding an abundance in the area, the men had for the first time in a week enough to eat. With stomachs full and mounts rested, the head of the cavalry column, Lee’s brigade, reached Union Mills, Maryland, halfway between Littlestown, Pennsylvania, and Westminster, Maryland following the skirmish. The night of June 29 saw Stuart’s column stretched out between the two points, and, at Union Mills, Stuart found a restful evening.

CIVIL WAR WEEK Continues tomorrow with part two of Days to Doom, a prelude to the Battle of Gettysburg July 1 thru 3, 1863.