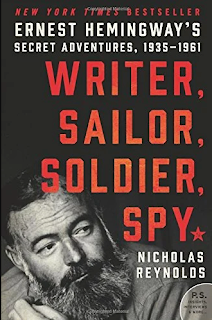 Papa was a spy pretty much for any anti-fascist organization, country, or army who agreed to bring him on board writes Reynolds in 2017.

For purposes of today’s blog, PillartoPost.org focuses on another facet of Hemingway’s past: his bad temper.

Papa sicced his New York mouthpiece to sue Esquire arguing that in 1938 Hemingway was totally anti-fascist and pro-Russian, but in 1958 the Russians were our arch enemies. Hemingway’s side argued the republication put the author in a bad light for his then leftist leanings. In 1958 being a leftist was dangerous in many back alleys. Much a do-do later, Hemingway dropped the lawsuit. It’s all in Reynolds’ fine book that’s available online at Amazon and Barnes/Noble.

“The Butterfly and the Tank was one of the short stories that Esquire chose to reprint without Hemingway’s permission. It can be found in its entirety online CLICK HERE. Also, CLICK HERE for a half-hour interview with Nicholas Reynolds now on YouTube.