On this day in 1906, Pittsburgh millionaire Harry Kendall Thaw, the son of coal and railroad baron William Thaw, shot and killed Stanford White, a shocking crime and trial that took the April 18 San Francisco Earthquake and fire off the headlines.

White, a prominent architect, had a tryst with model, showgirl and actress Florence Evelyn Nesbit before and perhaps during her marriage to Thaw. The shooting took place at the premiere of Mamzelle Champagne in New York at the Madison Square Garden rooftop theatre that White’s firm had designed. 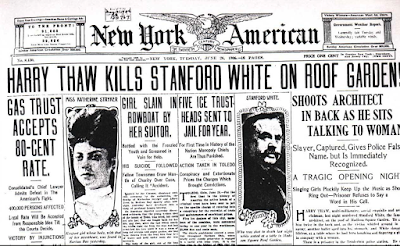 In her mid teens, Nesbit began as a legitimate artist’s model for respected painter James Carroll Beckwith and posed for illustrator Charles Dana Gibson (The originator of the Gibson girl). She appeared in advertisements (Coca-Cola for one) and in the play White Rose, she was the talk of the town as Vhasti, the gypsy girl.

Must have been some performance as Harry Thaw admitted he saw her perform in the White Rose more than 40 times. Actor John Barrymore allegedly attended eight performances and was in all the gossip columns as one of Evelyn’s suitors. She rejected Barrymore’s marriage proposal in favor of Thaw.

Somehow, she made it to age 21 before she and Thaw   married.

Nesbit testified in the trial after Thaw was arrested and   tried as America’s first celebrity defendant. After the   first  “trial of the century” ended in a deadlock, a second   trial found Thaw guilty by reason of insanity. He served   five years in an insane asylum before being released.

By the end of WWI, Nesbit divorced Thaw, and had a   baby boy, allegedly by three or more possible fathers.   Her career in silent B-movies faded as America frankly   didn’t give a damn anymore. All eyes focused were now   focused on Hollywood.  She died in 1967. 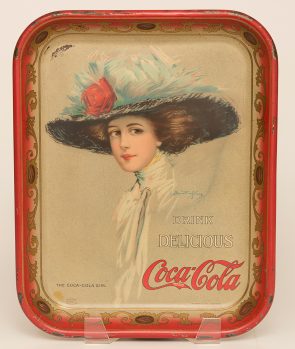