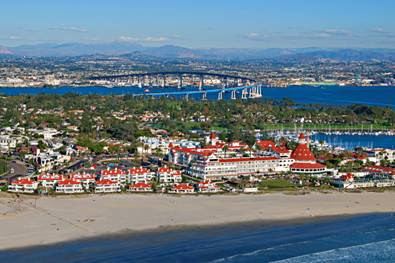 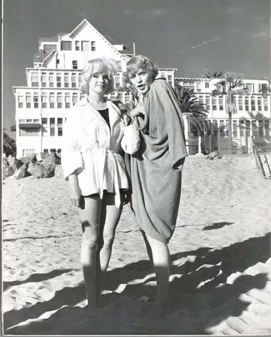 CORONADO CALLING-- Coronado Beach is glowing today, albeit the day is a bit breezy because national media source “Dr. Beach” named the silky-gold flecked sands in Coronado the number one beach in the nation. The 22nd annual poll to name the best beach gets the attention of news outlets similar to the silly groundhog in Pennsylvania every February.

Locals, however, bemoan the secret is out.

Actually, it’s just nice to know that Coronado’s stretch of clean, white sand adjacent to the independent municipality of Coronado and the famed Hotel Del Coronado has captured the reading eyes of the U.S.

“Coronado Beach in San Diego is a 1.5 mile long, wide sandy beach set against the backdrop of the iconic Hotel del Coronado with its peaked red roof and classic Victorian architecture, according to Leatherman. “The beach is popular for swimmers, surfers, sunbathers and beachcombers. The beach is very flat, making it great for skim boarding and walking, and the sand has a silvery sheen because of the presence of mica. Families arrive in the morning, toting umbrellas, beach towels and picnic coolers for an all-day stay. A great team of lifeguards stands watch.”

The Hotel’s release got picked up world-wide. That’s the benefit of having a professional marketing person on staff. Curiously, when many media outlets ran with the story many Internet comments complained that Coronado Beach was not worthy of its high ranking because the water was too cold. As if the beach stayed up all night tossing ice cubs into the water?

Getting back to the Hotel Del for a moment, the hotel’s popularity makes the lobby level at times as busy as the Zoo or Sea World, but for those fortunate enough to have stayed on the top floors (via a human operated elevator), the Hotel Del is serene and sophisticated. Go ahead-- open the Victorian veranda door and step out into the moment.

Images: Coronado Beach from the air next to Hotel Del Coronado, built in 1888.

Actors Marilyn Monroe and Jack Lemmon during 1958 Coronado Beach filming of director Billy Wilder's classic "Some Like it Hot."