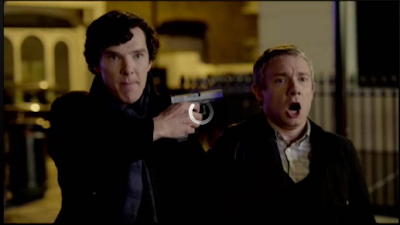 HOLMES IN HOMES—“Sherlock,” the contemporary series returns TONIGHT at 9 pm and on May 13 & 20 for a second season on PBS’ Masterpiece. The dailies have given detailed previews of the trilogy starring Benedict Cumberbatch as Holmes and Martin Freeman as Watson so no need to rehash what hasn’t happened. But for fans of the venerable detective (now into his third century) this is not to be missed “fun” television. And, who doesn’t like fun?

Recent portrayals of Holmes via Cumberbatch and Robert Downey, Jr. have played Sir Arthur Conan Doyle’s undying character for action with equal amounts of laughs. It’s akin to producing a Shakespearean play in modern grunge attire. Of course, there is plenty of room for new interpretations of how Sherlock goes about solving cases. Modern Sherlock is better than no Sherlock at all. As wit goes, the new PBS Sherlockian episodes are promised to be masterpieces in clever writing. It will be fascinating to see how new new boyz fare, tonight.

Pre-Review view. Yet, with no apologies for sounding like an anti-Cumberbatch, anti-fun fuddy duddy (judging from Cumberbatch’s first Sherlock series), I prefer the more traditional performances of Jeremy Brett and Nigel Bruce from years past. But how many times can you reread Doyle or view Brett and Bruce?

Perhaps future Sherlock interpretations will have the pendulum swing away from camp—for just once—toward a more thriller genre. More Sherlock and less Shlockmeister.

Let’s play Sherlock like actor Matt Damon did in the Bourne series films. The action from author Robert Ludlum’s pen was riveting throughout without the obligatory diversions to be funny. Cutting the saccharin by a spoonful or so could be refreshing—just once and certainly not forever. Or, is that asking Mickey Mouse to play Humphrey Bogart?