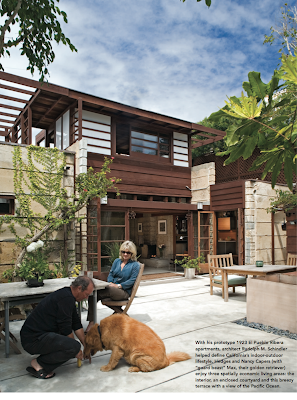 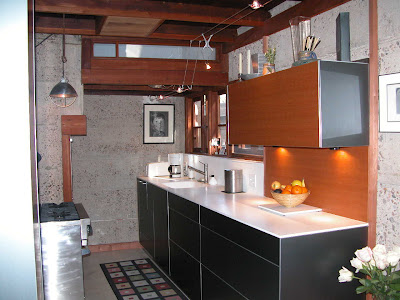 “The sense for the perception of architecture is not the eyes—but living. Our life is its image.” Rudolph M. Schindler (1878-1953)

SCHINDLER’S GIST--Hedges and Nancy Capers knew the late Rudolph Schindler was a famous architect. What they didn’t realize was that their modest-size La Jolla apartment was such a big deal.

Called El Pueblo Ribera, the historic cluster of side-by-side, three-level compounds, each with a walled courtyard, is considered “a masterpiece of early California modernism,” according to author Dirk Sutro in San Diego Architecture (AIA, 2003). It is the only known Schindler-designed project in San Diego. Since its completion in 1923, the historic Windansea apartment complex has been reconfigured into six units from the original 12, with the Capers’ remodel being the jewel.

Architect Schindler arrived in America in 1914 and soon became a protégé́ of Frank Lloyd Wright in Wisconsin. By the late 1920s, Schindler was an es- tablished force in the early modernism movement by virtue of his minimalist residential designs, mostly in Los Angeles.

El Pueblo Ribera, a half-block from the ocean, was the Vienna-born architect’s early-career experiment in social housing with concrete residential construction techniques. Schindler is admired by many architectural historians for his use of board-framed, on-site concrete construction for residences, a revolutionary building technique for the era.

Constructed with sand and gravel from nearby Windansea Beach, the units were shaped from red- wood, concrete and glass. The dwellings have three main features: living areas, walled courtyards and flat-roofed terrace levels. Although labeled apartments, each unit always has been privately owned.

Nancy Capers says her husband first discovered the compound in the 1980s, when the couple lived in Los Angeles. “Years later, after we moved to San Diego, we noticed all six were for sale. Today, we wish we’d bought all six,” she says, “It was love at first sight. The moment we walked in, I had this feeling of serenity and peace.”

They conceded the biggest adjustment would be learning to live in a smaller space. “But that’s a small price to pay for the other benefits—like living in a historic home steps away from the ocean,” she says.

Just how small is the unit? Not so small, if you consider the total living area, which includes a 760- square-foot deck on the top floor, with a view of the ocean and coastline. With decks and court- yards added, the average unit is about 2,000 square feet.

The owners did most of the restoration, including interior design, except for the Bulthaup B3 system kitchen.

“The house feels like living in a piece of art,” says Nancy. “I really like its openness and grace. And the upper deck is extraordinary, allowing us to gaze out from our corner of the Pacific Rim.”

Kitchen: Bulthaup Kitchen was installed in a recent remodel.