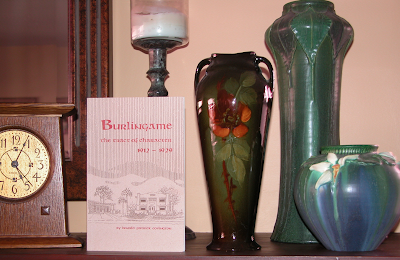 WHY WE LOVE BURLINGAME--Aficionados of local residential architecture are alerted to a rare opportunity to take in two home tours, which coincide with the 100th anniversary of the founding of the San Diego neighborhood of Burlingame, which has become the Burlingame Historical District.

WHERE IS BURLINGAME? This San Diego Mid-City neighborhood of 170 architecturally interesting homes is within the following boundaries: Switzer Canyon to the North, Kalmia Street to the south; 32nd Street to the East and 30th Street.

HOME TOUR #1/May 19. The North Park Historical Society is offering a docent-led one and one-half hour tour of 20 Burlingame homes. The tour cost is $5 and docents will discuss the homes, but on access to interiors will be provided. Tourgoers are asked to meet at 32nd & Kalmia Street Saturday at 9:30 am. Ticket Info: 619-294-8990. Come for the tour but also note that NPHS is offering for sale ($15) copies of Don Covington’s Burlingame book, which gives more detail. The paperback book also includes many pen and ink drawings of the homes by Prof. Covington.

HOME TOUR #2/June 2. The Burlingame Club is sponsoring the Burlingame Centennial Home Tour, which includes six (inside viewing) homes on Saturday between 10 am and 4 pm. Begin the tour at 3117 Laurel Street. Cost is $25 per person with proceeds to charities. Tour info: 619-285-9680.

BRIEF HISTORY: Donald Covington, the late North Park resident and local historian penned the following notes on Burlingame in his book “Burlingame, the Tract of Character 1912-1929”

“…In January 1909, a group of citizens living on the northeast corner of Balboa Park petitioned the Vice President of the San Diego Electric Railway Co. for an extension of the South Park line up 30th Street to Upas. The single track line and the 30th Street Bridge over Switzer Canyon which were constructed that year helped to open the sparsely settled region to suburban development/

Two years later, in the autumn of 1911, the car line was double-tracked in response to heavy demand from the rapidly expanding area. In November1911, a real development firm, McFadden & Buxton, bought 40 acres east of the 30th Street car line over looking Switzer Canyon. After two months of improvements those 40 acres became Burlingame.

On Saturday, January 13, 1912, the Burlingame tract was opened for public inspection. On that first weekend, 34 lots were sold. Late in January 1912, the distinctive red curbs, crosswalks and sidewalks were laid, paving the way for the beginning of residential construction…”

MORE HISTORY NOTES There is an excellent roster of interesting articles on various aspects of Burlingame available on the Burlingame Club’s website: www.burlingames.com There you will find a link to Prof. Covington’s original article for the San Diego Journal on Burlingame. For more information on the North Park Historical Society go to www.NorthParkHistory.org