With so many brewers in town, it’s no surprise when San Diego does well in world and national beer competitions, the locals reap the benefits. 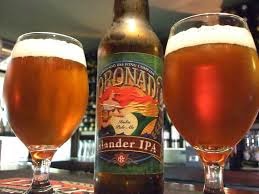 Coronado Brewing Company (located across the the harbor from downtown San Diego) is the reigning Gold Medal champion of the planet for its Islander IPA earned at the 2014 World Beer Cup.  Cool as winning Gold for Islander IPA happens be, Coronado as a brewer also received the highly coveted Champion Brewery/Champion Brewmaster.  Simply put, Coronado Brewing Company is--right this minute--the best in the world. Let's savor it!

More on these championship brewing operations:

Coronado Brewing Company:
In 1996, when craft beer was still a foreign term and San Diego County was home to only a handful of breweries, the Chapman brothers Ron and Rick opened a brewpub in their hometown of Coronado. CBC brews abundantly hoppy West Coast-style ales staying true to their San Diego roots. They began distributing their beers throughout the local market, and today you can find Coronado beers in 13 states across the US. In addition to their long established pub in Coronado, the company opened a tasting room inside their newly built San Diego production facility in early 2013.
http://coronadobrewingcompany.com/

Ballast Point Brewing & Spirits:
After developing a taste for beer in college, founder Jack White decided to try making more interesting beer than he could find in the store or at a keg party. He developed a talent for home brewing in his back yard and soon realized it wasn’t easy to get access to the various supplies and ingredients he wanted—nor did he have anyone with whom to trade ideas about brewing.

In 1992, Jack opened Home Brew Mart, which he filled with the supplies, ingredients, and conversation every brewer needed to make better beer at home. Soon after, he found a collaborator in Yuseff Cherney, a fellow home brewer with a similar passion and a set of home brewing awards to boot. Together, they decided to open a “back room” brewery out of Home Brew Mart. In 1996, Ballast Point Brewing was born.
http://www.ballastpoint.com/
The Brewspaper is a regular column appearing in Pillar to Post online magazine.  This blog is a media partner with West Coaster, a Southern California-based craft beer centric print publication and website: www.westcoastersd.com.