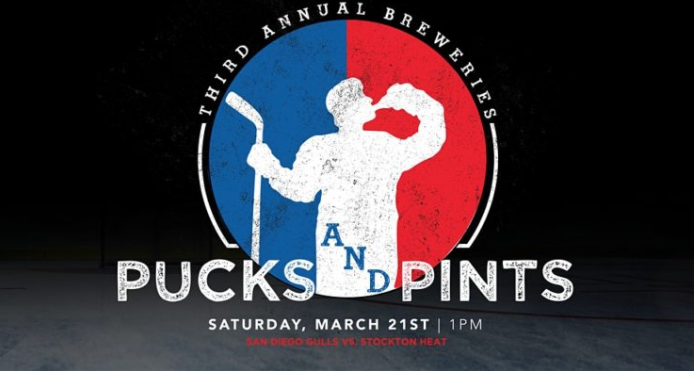 Friday, March 6–Sunday, March 8 | Renaissance Weekend: Any visit to Churchill’s Pub will yield a list of wide-ranging, phenomenal beers, but kegs of rare one-offs are set aside to be tapped one enchanted weekend of the year…and this is it. Get your fill of hoppy, sour, barrel-aged and otherwise special ales and lagers in tandem with a menu of specialty concoctions. | Churchill’s Pub & Grille, 887 West San Marcos Boulevard, San Marcos, Times Vary

Saturday, March 21 | Pucks & Pints III: For the third straight year, members of San Diego’s craft brewing industry will pad up and square off in a truly “cool” exhibition. That icy melee will be followed by an after-party at Phil’s BBQ and, if you still have the wherewithal for more hockey and beer, a pro-skills game between the San Diego Gulls and Stockton Heat. | Pechanga Arena, 3500 Sports Arena Boulevard, Midway District, 12:30-9 p.m.

Saturday, March 28 | Grand Opening: The little meadery that could is growing into the medium meadery that can. Miramar’s award-winning Lost Cause Meadery will debut its new Bay Park headquarters to the public, and the celebration will include a bottle release at noon as well as brick-oven pizza provided by neighboring business, Cucina Caprese. | Lost Cause Meadery, 5328 Banks Street, Bay Park, 12-10 p.m.

Don’t forget to check out our full events calendar for a regularly updated listing of even more beer-related events taking place in San Diego County this month and beyond.