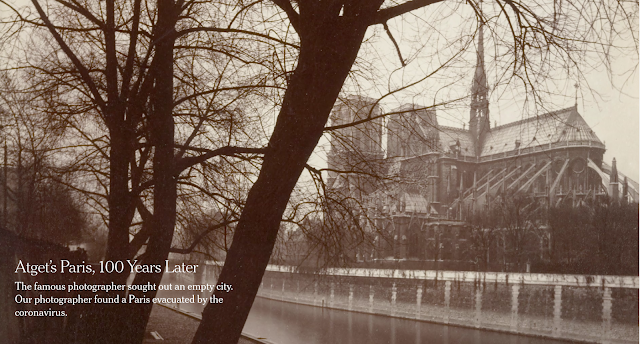 Comparing old images with new ones is not an original photographic technique—unless the subject happens to be Paris.

Eugene Atget’s early photographs of “Paris, 100 years later” is the title of a remarkable 2020 photo essay in the New York Times.

The Times commissioned photographer Mauricio Lima to recapture the sepia-esque mood of Atget’s early work by following up with new images of the same location a century or he new images were easier to photograph because the 21st century Covid-19 pandemic made the streets of Paris virtually empty.

It fit the style of Atget’s (1857-1927) because the pioneer photographer preferred to capture the real city devoid of as many humans as possible. Atget was not a hermit albeit he was a loner and the reason he woke up early to photograph his native city was so he could better compose still life scenes.

Though his modest purpose when making photographs was to create documents for other artists and craftsmen to use for their art—the sign outside of his studio read, “Documents pour artistes” (“Documents for artists”)—the cache of photographs he left behind testify to his own artistic talent.

So often historical photos, especially pre-world war II by early photographers, often produced straight forward uninspired images with little regard for composition. Thanks to Atget the world has a irreplaceable universe of more than 8,500 expertly composed images of Beaux-Artes Paris and its surroundings before modernization replaced so many of the structures.

“...For more than 20 years I have been working alone and of my own initiative in all the old streets of Old Paris to make a collection of 18 × 24cm photographic negatives: artistic documents of beautiful urban architecture from the 16th to the 19th centuries…today this enormous artistic and documentary collection is finished; I can say that I possess all of Old Paris...” — Eugène Atget, Atget, E. Letter to Paul Léon, Ministre des Beaux-Arts, November 12, 1920.

Wikipedia has a solid bio of Eugene Atget, including many of the photographer’s best work in WikiCommons: Click here.

After Atget’s death in 1927, a young American photographer, who became a huge fan of Atget’s collected as much of his work as she could afford and/or obtain. She brought that work to America, where over the next 50 years Berenice Abbott championed Eugene Atget by presenting his work to galleries and museums in America and Europe.

London gallery Huxley-Parlour offered the following liner notes from a modern day exhibition of Atget’s work, including the contributions to his legacy by Bernice Abbott and others:

From Huxley-Parlour: Man Ray played an important role in Berenice Abbott’s early development as a photographer by introducing her to the work of Eugène Atget. The reclusive photographer refused to acknowledge that his work was art, or even photography, preferring to call his images of Paris streets and gardens ‘documents pour artistes’.

Atget had become something of a legend amongst the Man Ray’s circle, being adopted as a proto-Surrealist and a figurehead for the movement. Abbott visited Atget and convinced him to come to her studio to have his portrait taken. The resulting photographs show the elderly photographer to be world-weary, his back stooped and his gaze distant.

Having made prints of the photographs, Abbott went to Atget’s studio several days later to show him but discovered that he had died. Fearing that Atget’s colossal collection of prints and glass plates might be lost, Abbott set about trying to acquire them with the financial support of friends.

She resultantly became the sole owner of the Atget collection and would toil tirelessly to garner Atget the recognition she knew him to deserve. Abbott returned to New York in 1929, telling her friends in Paris that she was going for a six-week visit in order to find a publisher for the Atget collection. She found New York in the midst of its second great building boom and bought a small, hand-held camera to take photographs of the city streets which she planned to take back to Paris to show magazine editors. Seeing the massive artistic potential in New York, Abbott returned briefly to Paris and sold all her belongings apart from the Atget collection which she took back to New York.

Abbott’s friends thought she was mad to leave her successful business and burgeoning fame in Paris, but she was determined to find a publisher for Atget’s photographs and was eager to return to New York. In October 1929 the stock market crashed and the United States began to spiral into the Great Depression.

Having left her profitable business in Paris, Abbott was forced to sell a share of the Atget collection to art dealer, Julian Levy, who intended to exhibit and sell the prints. Levy found the market uninterested in Atget’s work, however, and was unable to sell it. He quickly resumed selling paintings. The Museum of Modern Art would acquire the Atget Collection from Abbott and Levy in 1968. It was the largest single acquisition in the history of the museum’s photography department.