GUEST BLOG / Astute analysis by esteemed mystery writer Sophie Hannah--I like to approach the choice of favorite Agatha Christie novels (a question I’m asked rather a lot) in the same way that I approach any search for a new home.

Some people, if they want to buy a house, start out with a list of requirements that they then stick to no matter what: detached, four bedrooms, large garden, etc. I used to make this kind of list too — only to find myself ignoring it completely when I fell in love with something that was the exact opposite of what I thought I wanted.

Now, I’m more realistic: if I’m aiming to find a new home, I say to real-estate agents, ‘I’m open to any type of thing — anything at all — so please show me ‘Best of Type’.

That’s exactly how I approach the choice of my favorite Christie novels. Best of type — it’s so much easier to get clear  than ‘overall favorite’ or ‘overall best’.

So, here are my favorite ‘Best of Type’ Agatha Christie novels:

1) Lord Edgware Dies – Best Murderer Character Poirot sets out to find the killer of Lord Edgware, in a brilliantly labyrinthine and complex puzzle mystery puzzle with an impressively simple solution. The murderer in any Poirot novel ultimately has to ‘lose’, but here the philosophy, plan and character of the killer are so well conveyed that they manage to own a significant share of the story. This is a killer who almost succeeds in making the reader appreciate the artistry of an exquisitely planned murder and really gives Poirot a run for his money. 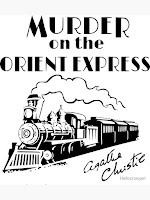 2) Murder on the Orient Express – Cleverest Solution in all of Crime Fiction When an American tycoon is found stabbed to death inside his locked train compartment in the middle of a snowstorm, Poirot must find the murderer among his fellow passengers. Christie invites the reader to consider and discard every imaginable theory before hitting us with the only possibility that we did not consider: a solution stunningly clever that it feels like a twist, though the answer is there for the taking all along. I love the pedantic clue-gathering in this book. The whole structure is perfect, right down to the layout of the Contents page, where the three parts of the novel are depicted like three carriages of a train.

3) The Hollow – Best All-Round Novel When John Christow is murdered, his wife – as the holder of the smoking gun – seems to be the obvious culprit. As all the evidence against her is discredited, Poirot finds himself at the centre of an impossible mystery. The Angkatell family are vividly portrayed and spring off the page, fully formed. All the characters — even the most minor ones — are memorable, and the relationships and undercurrents are fascinating. This book shows that Christie was as skilled a novelist as she was a mystery plotter, and it wins in another category too: Best Discovery of a Body Scene – Poirot at first imagines that the swimming-pool murder scene is a pantomime that has been staged purely for his amusement. There’s a surreal, dream-like quality to the scene that makes it chillingly unforgettable.

4) Evil Under the Sun – Best Poirot-On-Holiday Novel Poirot’s vacances a mer are shaken up by the killing of fellow holiday-maker, Arlena Stuart. A crime of passion is the obvious solution, but Poirot suspects something darker. The atmosphere is pitch-perfect here, and the beach-holiday customs provide wonderful clues. There’s a large and varied cast, and the ingenious plot and solution include some stunning overturning of reader assumptions and extremely clever clue-ing. This is the book for anyone whose idea of perfection is solving a baffling murder-mystery puzzle while on an amazing beach holiday.

5) The Big Four I haven’t declared above what The Big Four’s award is, because you have to hear me out first. This novel, in which the ramblings of an intruder spark an investigation into an international crime ring, is generally not considered to be among Christie’s best, but I absolutely loved it! It’s unique in tone – Poirot and Hastings are like superheroes in a cartoon-like melodramatic adventure –  it’s highly entertaining and we get to see how much Poirot and Hastings mean to each other. The Big Four gets my Most Unfairly Maligned Christie award!

6) And Then There Were None – Best Crime Novel Ten strangers are summoned to an island mansion and accused of each harbouring a dreadful secret. Cut off from help, when one sudden death follows another, nobody knows who the murderer is or who the next victim will be. If The Hollow wins Best All-Round Novel, this ambitious work is Best Crime Novel. The plot is flawless, the sinister atmosphere brilliantly sustained, and the mystery impossible to solve until the moment of revelation. This is a work of genius and perfection.

7) A Murder is Announced – Best Impossibly Outlandish Premise The villagers of Chipping Cleghorn are horrified and intrigued when a murder announcement appears in the local paper, inviting anyone who’s interested to attend Little Paddocks at 6.30 pm and watch for themselves as the murder takes place. It’s an irresistible hook for the reader. This book has such a fantastic set-up, brilliant clue-ing and a satisfying resolution which does the premise justice. This is Miss Marple at her superb best!

8) Three Act Tragedy – Highest Number of Clever Motives for Murder in One Novel Poirot is perplexed by the apparent lack of motive when one sip of a cocktail causes the instant death of Reverend Stephen Babbington, a fellow guest at a dinner party. When the dinner host dies in the same way only a short while later, the mystery intensifies. This book contains two motives for two different murders that are so clever and conceptually brilliant that they elevate the whole book to ‘top tier’ Christie level.

9) After the Funeral – Best Motive Cora Lansquenet is found hacked to death hours after the reading of her brother Richard’s will, during which she shocks her family with the declaration that he was murdered. The Abernethies are a wonderfully dysfunctional family and there’s a perfect balance between plot and character in this novel, and between concealment and revelation. My favorite aspect is the murderer’s double-layered motive – a motive-behind-the-motive sort of scenario – one of Christie’s most unforgettable mysteries.

10) Why Didn’t They Ask Evans? – Best Hooky Title So says the murder victim as he lies dying at the bottom of a cliff. Bobby Jones – the stranger who finds him – has no idea what the words might mean but vows to find out. That the title of the book is also its irresistible hook is a brilliant feature, for the reader is instantly compelled to know what this strange question means. For much of the book it feels impossible that we’ll find out, but the plot unfolds and falls in to place in the most satisfying way.