Like many Americans, you may wonder how election outcomes could affect the financial markets. You may also wonder whether you should make any changes to your strategy based on election results.

Although changes in government policies can have a sizable effect on investment returns, they’re much harder to predict than you might think, and the consequences of policy changes are usually not as expected.

As a result, we think it’s better to follow time-tested investment principles and avoid letting politics influence your long-term strategy. You may be surprised to learn that the stock market has increased under every political combination in Washington, providing an annual average return of 8% per year.

And the economy has grown regardless of who controlled the White House and Congress. 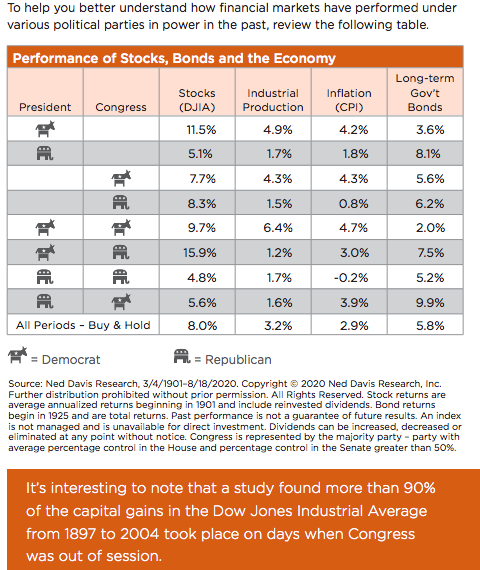 As the posted table indicates, the stock market and the economy have performed better under Democratic presidents. They’ve also performed better when Democrats had the majority in Congress.

However, inflation has been lower during Republican presidencies and congressional majorities. This has resulted in improved performance for the bond market. It might be tempting to think these differences will continue, but we think it could be dangerous to your wealth to predict what’s going to happen in the financial markets based on the political configuration in Washington.

While political leaders may change our tax laws, government spending and industry regulations in hopes of having a positive effect on economic growth, jobs, interest rates and inflation, the results are not nearly as predictable as they might imagine. Frequently, it seems that some changes have gone too far, but the next election tends to move in the opposite direction. One of the strengths of the U.S. political system is that the pendulum tends to swing back toward the center over time.

And, as Will Rogers said, we should “be thankful we’re not getting all the government we’re paying for.”

The Market Is More Powerful Than Politics During election years, politicians make many promises that go unfulfilled. That’s partly due to our government’s system of checks and balances.

However, we believe that market forces are more powerful than political forces over the long term. What sounds promising during election campaigns often may not work in reality. What about other factors that affect the prices of stocks and bonds?

Again, it’s not about the politics but rather market forces. The chart shows the U.S. economy’s long-term trend, which depicts a fairly good record over a variety of political environments. Keep in mind that, historically, there have been seven months of growth for every month of recession since 1947.

Look Past the Short Term

There’s almost always uncertainty about the short-term outlook. Campaign tactics deliberately raise many questions with few easy answers. If you’re feeling uncomfortable, remember this: The mix of investments you own makes more difference to your long-term “victory” or “defeat” as an investor than any election results.

We believe today’s valuations, while not as low as they were a few years ago, still suggest it’s a good time to consider adding a variety of equity investments (stocks), which may provide attractive returns over the long run.

It’s also important to ensure you have an appropriate type and amount of fixed-income investments. By maintaining an investment mix tailored to your situation, we think you’ll find it easier to look past short-term political and market uncertainties.

Stick with a Long-term Strategy

The success, growth and resiliency of the U.S. don’t change with each election. And neither should your investment strategy. We believe there are opportunities for investors who focus beyond the election outcome and “vote” for sound investment principles, such as buying quality investments in a well-diversified portfolio and holding them for the long term.

Diversification does not guarantee a profit or protect against loss. Past performance is not a guarantee of future results. Investors should understand the risks involved in owning investments, including interest rate risk, credit risk and market risk. The value of investments fluctuates, and investors can lose some or all of their principal.