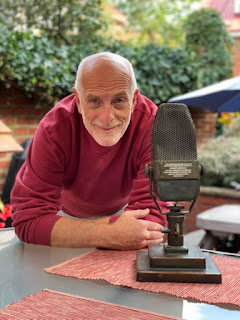 Casey Murrow, whom Freedman awarded a lifetime Club membership during his inaugural gala in January, honored that recognition by donating to the Club several of his father's personal possessions and agreeing to loan the Club the historic BBC microphone used by Murrow for his CBS Radio broadcasts from London during World War II. “Modern broadcast journalism was literally invented on that microphone,” said Freedman, a former CBS Radio Network general manager. “It is indeed the Holy Grail of the profession."

The example Murrow set can inspire journalists today. "As our nation confronts unprecedented converging challenges, all reminders of Ed Murrow's life, work, and legacy serve to strengthen our resolve as journalists to have the courage of our convictions,” Freedman said. “We are deeply grateful to Casey Murrow for his donations to the Club.” 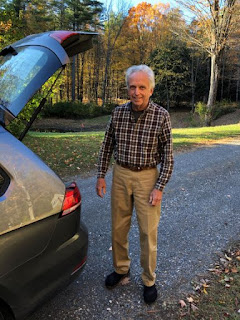 In the midst of the global pandemic and concerned about shipping such precious cargo, Murrow and Freedman agreed to meet part way between their homes in Vermont and Virginia. They selected a service area along the Garden State Parkway. Both arrived on time at 11 a.m. and unbeknownst to the other travelers who were stretching their legs and buying coffee, an exchange of historic proportions took place in the parking lot.

Among the items Casey Murrow (left) placed in Freedman's car as donations to the Club were his father's briefcase, hunting vest, poker chips, and archivally framed photos and art that hung in Ed Murrow's office and home.

All will be displayed in the Murrow Room and elsewhere in the Club over the coming months. “The Murrow family is thrilled that these artifacts will be part of the collection at the National Press Club,” Casey Murrow said.

“It seems to us a fitting location for both memorabilia and photographs of Ed Murrow, whose impact on radio and TV journalism continues to inspire us all, over five decades after his death.”

In addition, Murrow transferred to Freedman's car the historic microphone that launched the era of broadcast journalism. He loaned it to the Club through the end of the year.

A plaque on the microphone reads: "This microphone, taken from studio B4 of Broadcasting House, London, is presented to Edward R. Murrow who used it there with such distinction for so many broadcasts to CBS New York during the war years 1939-1945." The inscription is dated March 8, 1946. In a 1955 BBC interview, Ed Murrow said the microphone was "the only trophy I ever kept and I have received many." Murrow added that receiving it when he departed London after nine years, was 'the most touching thing that ever happened to me." He concluded, "This I value above anything I have."

MORE ON MURROW: Compiled by PillartoPost.org