RETRO FILES / END OF WORLD WAR I, SORT OF 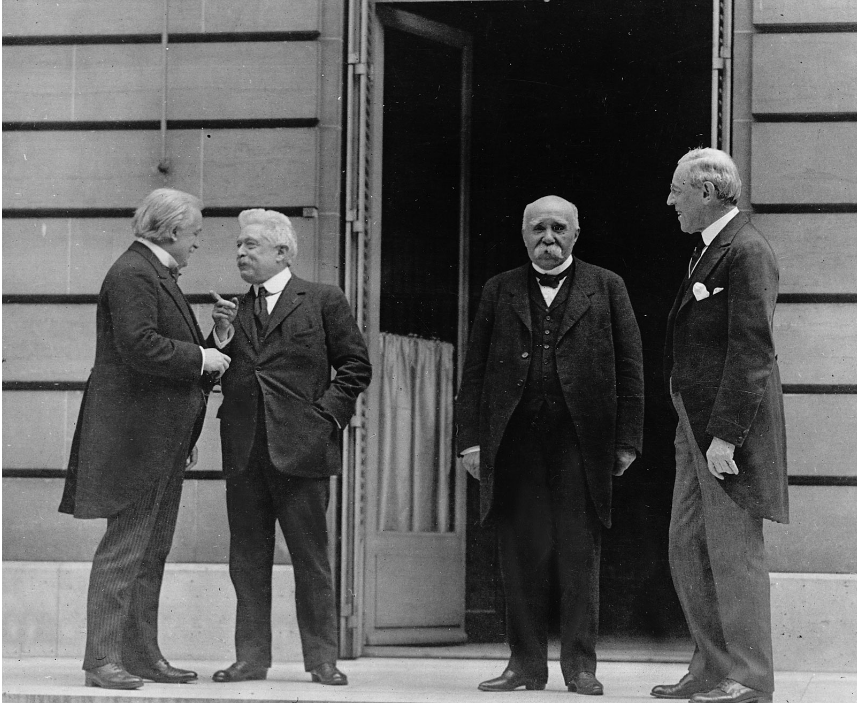 Above. The “Big Four” (left to right): David Lloyd George of Britain, Vittorio Orlando of Italy, Georges Clemenceau of France, and Woodrow Wilson of the United States, the principal architects of the Treaty of Versailles.

The Treaty was signed on June 28, 1919 inside the Hall of Mirrors, Palace of Versailles, Paris. The Treaty signing date is not to be confused with the Armistice of 11 November 1918 which was signed at Le Francport near Compiègne that ended fighting on land, sea and air in World War I between the Allies and their opponent, Germany.

Previous armistices had been agreed with Bulgaria, the Ottoman Empire and the Austro-Hungarian Empire.

All of the Irreconcilables were enemies of President Woodrow Wilson, who originally advocated for the League of Nations and helped compose the details of the treaty. In 1919, the Treaty of Versailles reached the Senate for a vote of ratification.

Most Democrats supported the treaty, but the Republicans were divided. Besides the Irreconcilables, a second group of Republicans called the Reservationists, led by Senator Henry Cabot Lodge, declared they would support the treaty if certain alterations were made.

When Lodge formed a coalition with pro-treaty Democrats and submitted a revised treaty with 14 amendments to the Senate, Wilson persuaded the Democrats to reject it. The final Senate vote fell far short of the two-thirds majority needed to ratify the treaty. It was the first time the Senate ever rejected a peace treaty.

Because the U.S. Senate never ratified the Treaty of Versailles, the United States signed separate treaties with Germany in 1921 and 1922 that enabled the United States to help Germany rebuild as a nation apart from the strict supervision of the League of Nations.

In November 1919, President Wilson proclaimed November 11 as the first commemoration of Armistice Day with the following words: "To us in America, the reflections of Armistice Day will be filled with solemn pride in the heroism of those who died in the country’s service and with gratitude for the victory, both because of the thing from which it has freed us and because of the opportunity it has given America to show her sympathy with peace and justice in the councils of the nations…"

The original concept for the celebration was for a day observed with parades and public meetings and a brief suspension of business beginning at 11:00 a.m. The United States Congress officially recognized the end of World War I when it passed a concurrent resolution on June 4, 1926, with these words: Whereas the 11th of November 1918, marked the cessation of the most destructive, sanguinary, and far reaching war in human annals and the resumption by the people of the United States of peaceful relations with other nations, which we hope may never again be severed, and Whereas it is fitting that the recurring anniversary of this date should be commemorated with thanksgiving and prayer and exercises designed to perpetuate peace through good will and mutual understanding between nations; and

Whereas the legislatures of 27 of our States have already declared November 11 to be a legal holiday: Therefore be it Resolved by the Senate (the House of Representatives concurring), that the President of the United States is requested to issue a proclamation calling upon the officials to display the flag of the United States on all Government buildings on November 11 and inviting the people of the United States to observe the day in schools and churches, or other suitable places, with appropriate ceremonies of friendly relations with all other peoples.

Armistice Day was primarily a day set aside to honor veterans of World War I, but in 1954, after World War II had required the greatest mobilization of soldiers, sailors, Marines and airmen in the Nation’s history; after American forces had fought aggression in Korea, the 83rd Congress, at the urging of the veterans service organizations, amended the Act of 1938 by striking out the word "Armistice" and inserting in its place the word "Veterans."

With the approval of this legislation (Public Law 380) on June 1, 1954, November 11th became a day to honor American veterans of all wars. Later that same year, on October 8th, President Dwight D. Eisenhower issued the first "Veterans Day Proclamation" which stated: "In order to insure proper and widespread observance of this anniversary, all veterans, all veterans' organizations, and the entire citizenry will wish to join hands in the common purpose. Toward this end, I am designating the Administrator of Veterans' Affairs as Chairman of a Veterans Day National Committee, which shall include such other persons as the Chairman may select, and which will coordinate at the national level necessary planning for the observance. I am also requesting the heads of all departments and agencies of the Executive branch of the Government to assist the National Committee in every way possible."

On that same day, President Eisenhower sent a letter to the Honorable Harvey V. Higley, Administrator of Veterans' Affairs (VA), designating him as Chairman of the Veterans Day National Committee.

In 1958, the White House advised VA's General Counsel that the 1954 designation of the VA Administrator as Chairman of the Veterans Day National Committee applied to all subsequent VA Administrators. Since March 1989 when VA was elevated to a cabinet level department, the Secretary of Veterans Affairs has served as the committee's chairman.

The Uniform Holiday Bill (Public Law 90-363 (82 Stat. 250)) was signed on June 28, 1968, and was intended to ensure three-day weekends for Federal employees by celebrating four national holidays on Mondays: Washington's Birthday, Memorial Day, Veterans Day, and Columbus Day. It was thought that these extended weekends would encourage travel, recreational and cultural activities and stimulate greater industrial and commercial production.

Many states did not agree with this decision and continued to celebrate the holidays on their original dates. The first Veterans Day under the new law was observed with much confusion on October 25, 1971. It was quite apparent that the commemoration of this day was a matter of historic and patriotic significance to a great number of our citizens, and so on September 20th, 1975, President Gerald R. Ford signed Public Law 94-97 (89 Stat. 479), which returned the annual observance of Veterans Day to its original date of November 11, beginning in 1978.

This action supported the desires of the overwhelming majority of state legislatures, all major veterans service organizations and the American people. Veterans Day continues to be observed on November 11, regardless of what day of the week on which it falls.

The restoration of the observance of Veterans Day to November 11 not only preserves the historical significance of the date, but helps focus attention on the important purpose of Veterans Day: A celebration to honor America's veterans for their patriotism, love of country, and willingness to serve and sacrifice for the common good.