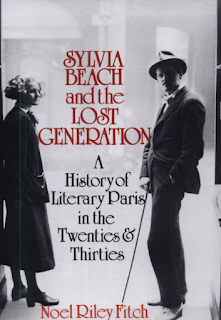 For 11 years she was Joyce’s sole publisher, and for 22 years she ran the most famous bookshop in the world—the meeting place for Joyce, Hemingway, T.S. Eliot, Ezra Pound, Andre Gide, F. Scott Fitzgerald, Archibald MacLeish, Thornton Wilder, Katherine Anne Porter, Janet Flanner, Samuel Beckett, Virgil Thomson, Harry Crosby and Sherwood Anderson.
Based on decades of research, with exclusive access to the Beach family papers, “Sylvia Beach & the Lost Generation” is a true literary chronicle of the glittering 1920s and 30s, rich in untold anecdotes about Joyce, Hemingway and others.

Professor Fitch has interviewed more than 50 persons and corresponded with dozens more. Despite it being published in 1983, this book remains current and fills in the important gaps in Beach’s own memoirs, which are full of polite compliments and guarded half-truths.

We learn the strange details of Beach’s odyssey from a parsonage in Princeton, New Jersey to the Left Bank of Paris, the secret suicide of her mother, and the long intimate relationship between Beach and Adrienne Monnier. For the first time, author Fitch reveals the circumstances of the bitter break between Beach and Joyce.

Images below are added by www.pillartopost.org