The following excerpt appears thanks to LitHub.com via Little, Brown publishers.

GUEST BLOG / By Rebecca Donner--My book All the Frequent Troubles of Our Days is about an American graduate student who was a central figure in Berlin’s underground resistance during the Nazi regime. I conceived of the book as part biography, part espionage thriller, part scholarly detective story—a genre-straddling work of narrative nonfiction about an enigmatic woman who was nearly erased by history. 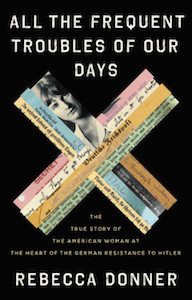 Her name—Mildred Harnack—is obscure to many. My book draws on a spectrum of archival documents including declassified US intelligence files released under the Nazi War Crimes Disclosure Act, the letters she wrote between 1929 and 1942, and the letters, datebooks, diaries, memoirs, and testimonials that her friends and coconspirators left behind.

When the Second World War broke out Mildred Harnack deepened her involvement in espionage, hoping to help the Allies defeat Hitler. In this excerpt, readers are introduced to her eleven-year-old courier, Don Heath Jr, the son of an American diplomat at the US Embassy in Berlin.

Snow. Fear. Light. One morning in December 1939, an eleven-year-old boy bursts out of the arched front door of an apartment building in Berlin, wondering whether he’ll get caught. On his back he carries a blue knapsack. Before him, the wide expanse of Schöneberg Park is blanketed in white. He shivers. He wears a wool coat, a black cap. The cap makes him look like a German boy. Four steps and he’s down the stairs; four more and he’s crossing the street.

The boy heads for the U-Bahn station. He’s not traveling far. A ten-minute ride to Nollendorfplatz, a short walk to Woyrschstrasse 16. His father showed him how. His father said: Pay attention. And: Talk to no one. The boy sees a tall man with a handlebar mustache, a woman wearing a fur hat, two boys with red mittens, and a goose-stepping girl.

Headlines blackening the pages of Berlin newspapers that month report ALL BRITISH AIR ATTACKS ARE DOOMED TO FAIL, denounce THE PLAGUE OF JEWS, and promise VICTORY IS CERTAIN! The newspapers are loaded with lies.

The boy knows this from his father, who spends most of his waking hours at his desk writing intelligence reports, sending them to Washington by telegram if they are confidential and by diplomatic pouch if they are highly confidential.

On several occasions, the boy accompanies his father to Bremerhaven, a port on the North Sea coast, where his father hands the diplomatic pouch to a man in the foreign service, who then boards a steamer ship.

The boy lifts his chin, searches the sky. German bombers. He doesn’t see them but he knows they’re up there. Their rumbling rattles his teeth, or maybe he’s just jittery, thinking about the job he’s got to do. An important job, said his father.

Like mine, yessiree, said his father, a Kansas native who holds two positions, one at the U.S. embassy in Berlin and one in the ranks of a department that has no official name or organizational structure, although soon it will come under the auspices of a hastily cobbled-together wartime intelligence group called the Office of the Coordinator of Information, the precursor to what will eventually become—after several iterations, upheavals, shake-ups, and shakedowns—the Central Intelligence Agency.

At the U-Bahn station, the boy waits on the platform. The train comes; its doors gasp open. He jumps in, finds a seat. Nollendorfplatz. Only ten minutes away.

Three and a half months earlier, shortly before the German Luftwaffe dropped five hundred sixty tons of explosive bombs onto Poland, the State Department urged all the men at the US embassy in Berlin to send their wives and children back home to America.

The boy and his mother went to Norway instead. They checked into a hotel in Oslo, where they waited for the boy’s father to send a message. The message came in November, early in the morning.

They packed quickly. Where are we going? the boy asked.

Back to Berlin, his mother said. Why? the boy asked. A war was under way. It didn’t make sense to return to Berlin. We need to help some people was his mother’s response.

They boarded a coal-powered train that swept them past farms and fields and ice-caked lakes. Snowcapped mountains lay bunched together, as if huddling for warmth.

The boy rested his forehead on the window, watching it all whiz by, wondering, Help how?

The boy shoulders his knapsack and exits the train, jumping nimbly over the gap between track and platform. He walks up a flight of stairs and out a glass door. Once past the U-Bahn station, he counts his steps in German: eins, zwei, drei. At zwanzig he squats down. His shoelaces are tied, but he fakes that they’re loose and ties them again, stealing a glance over his shoulder.

Two men. One is bald; one wears wire-framed glasses. He remembers what his father told him: Make sure no one follows you. He crosses the street. At the corner is an enormous department store, the Kaufhaus des Westens.

Berliners call it the KaDeWe. He walks in. The KaDeWe smells of perfume and doughnuts. There are seven stories. It won’t be long before an American bomber crashes into the building during an air raid, making a spectacular explosion, but right now the building is as intact as it is inviting.

The perfect place, the boy knows, to give someone the slip. He skips every other stair to the second floor, walks past a carousel of winter coats, ducks into an elevator that takes him up to the top and back down to the ground floor, where he exits through a side door.

Once outside he breaks into a run, the knapsack banging against his back.

No one follows him that day. But suppose you did. You would have seen an eleven-year-old boy with a blue knapsack run all the way to Woyrschstrasse 16, a few blocks south of the Tiergarten.

If you’d asked him why he was visiting Woyrschstrasse 16, he would have told you that his tutor was giving him lessons there. This is only half true. He enters the building and races up the stairs, his knapsack heavy with books.

At the top floor, a young woman wearing a modest dress typical of Nazi Berliner Frauen opens the door. Her honey-colored hair is pulled back into a bun. You would not guess that she, too, is American.

Nor would you suspect that when the boy leaves the apartment an hour later, his knapsack will contain something more valuable than books.

The boy is her courier, in the language of espionage. An eleven-year-old spy. Twice a week he visits her apartment, where they sit side by side on a sofa with wooden armrests and talk about the books she assigns him.

The books are various and unpredictable: classics and potboilers, Shakespeare and cowboy Westerns. She questions him about the plot, the characters, the themes. She has a low, kind voice. She says, Tell me what this book is about. She says, Tell me what you think, not what you think you should think. She is unlike any teacher he has ever had. Their lesson lasts an hour, sometimes two. When it’s over, she asks, Which way are you going home today?

Every time he takes a different route—she makes sure of it. Looking into his eyes, her gaze steady and solemn, she asks the boy to repeat the street names. If his attention wanders, she will cup his cheeks with her hands, the way his mother does, and ask him to say the names again.

Left. Rebecca Donner's essays, reportage and reviews have appeared in numerous publications, including the New York Times, Bookforum, Guernica, and The Believer. All the Frequent Troubles of Our Days is her third book; she is also the author of a novel, Sunset Terrace, and Burnout, a graphic novel about ecoterrorism. She was a 2018-2019 fellow at the Leon Levy Center for Biography, and has been awarded residencies at Yaddo, Ucross Foundation, Virginia Center for the Creative Arts, and Vermont Studio Center. Born in Vancouver, Donner is a graduate of the University of California at Berkeley and Columbia University, and has taught writing at Wesleyan University, Columbia University, and Barnard College.

To purchase the book from an indie bookstore via Bookshop.org CLICK HERE.