Editor’s note. During the pandemic times, the San Diego Union-Tribune kindly allows responsible bloggers to repost articles that the newspaper has posted on the Internet. The following article appeared on September 10, 2021. PillartoPost.org daily magazine-style blog appreciates the professional courtesy.

GUEST BLOG / By Lori Weissberg, Reporter, San Diego Union-Tribune-- The passing decades took their toll on the much-visited lobby of Coronado’s grand dame. The stained-glass windows gradually disappeared, the white oak columns and beams were painted over with layers of stain, and generations of visitors left the carpeting in something of a drab state. But that’s no more.

The latest phase of the $400 million renovation of the Hotel Del Coronado has delivered a light-filled lobby with a richly restored wood interior, new parquet floors, an elegant recreation of the original crystal chandelier, and the first of several new or restored stained glass windows.

The restoration — along with an expansive new veranda not seen since a couple of years after Marilyn Monroe walked up the hotel’s front steps in “Some Like it Hot” — is well-timed. In just a few months, the traditional two-story Christmas tree will be making an appearance after an absence last year due to the pandemic. While much of the ongoing redo of the 28-acre resort is intended to upgrade and modernize the property, the goal of the lobby and front porch project was to return the centerpiece of the 133-year-old hotel to its late-19th century roots.

“The lobby and front porch are probably the most exciting part of the master plan for our stakeholders and the community,” said Hotel Del Coronado General Manager Harold Rapoza. “You’ll see people sitting in rocking chairs on the porch all day long. It’s just a part of the history we haven’t had since the 1960s. And then you walk into the lobby, and it’s a big wow.”

Much of the hotel’s master plan improvements already have opened to the public, among them an expansive, glass-enclosed rooftop bar and restaurant overlooking the hotel pool and beachfront; a complete redo of its 97 cabana guestrooms; a new signature restaurant, Serea; a revamp of the hotel’s outdoor meeting area, Vista Terrace; and the more than 700-space North Parking Garage.

Currently under construction is the final piece of the master plan — Shore House at the Del that consists of already sold out 75 one-, two- and three-bedroom luxury units. The 75 limited occupancy condos, billed as second homes, should be completed by next year. While the Hotel Del Coronado has the unique advantage of being well recognized across the country, it cannot rest entirely on its laurels as it competes with other popular resort properties in Southern California, acknowledges Rapoza.

Even though the hotel experienced a record-breaking summer, an important element of the master plan upgrades has been to create areas of the resort that will draw a variety of age groups over the coming years. “What our ownership is doing is creating not only a new Del but it’s also making it exciting,” Rapoza explained. “Our customers are changing and we want to put it on the map again and create those memories that have been going on for so long. That’s why we’re creating these new ‘neighborhoods.’

The younger customer will stay in The Views or cabanas but we also have the Victorian, which is the history of the Del.” Here’s a look at the more recently completed projects in what is by far the most costly upgrade of the hotel since it opened in 1888.

As you make your way along the newly constructed, palm-tree-lined driveway, with the hotel’s imposing red-roofed turret coming into view, your first thought is, what took so long? While the new entry has long been included in the hotel’s master plan, the previous entrance, which Rapoza described as “very underwhelming,” had been in place for at least the last six decades. The new driveway, composed of decorative pavers, marks a return to its original location, where guests during the hotel’s early years would arrive by train.

It’s believed that the earlier alignment was relocated to its current location sometime in the 1960s. As vehicles approach the main entrance, they will go around a landscaped circle that features a new seahorse fountain. A signal has been installed at Avenida del Sol, off Orange Avenue, where cars will now turn to enter the property. “You drive up this longer, grander driveway and see the money shot of the front porch and the Del,” Rapoza said. “Before, there was not really a big draw or sense of arrival. Here you’ll also drive past historic buildings on your right.”

The new entrance is not quite ready to make its public debut. Because of staffing shortages that have afflicted the entire hospitality industry, Rapoza said the hotel is not able to open it up for properly greeting arriving guests, but he’s hopeful that will come within the next couple of weeks.

Most times of the day, you can find visitors and guests relaxing in rocking chairs, spaced along the wood flooring of the wide veranda. The original porch was built over in 1961, but the hotel master plan revived it as yet another step in returning the Del to its original look. The hotel relied on historic photos to make sure the new addition accurately replicated the original front entry. The porch includes two sets of entry stairs. 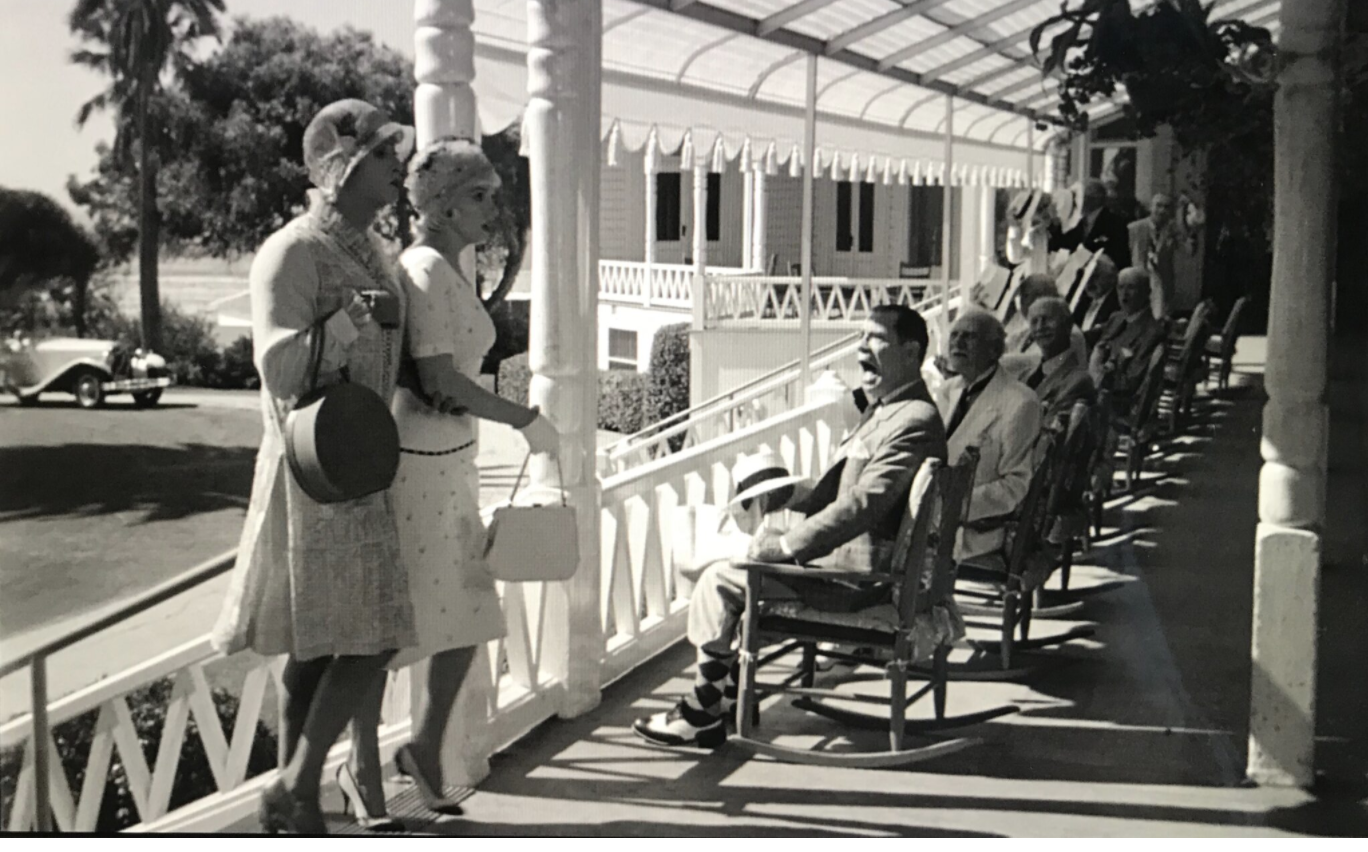 The Hotel Del Coronado's original front porch The veranda had something of a bit role in the 1959 film, “Some Like it Hot,” where in one scene several gentlemen are seen sitting on the porch quietly reading their papers. Above. They suddenly awake from their reverie and turn their heads as Marilyn Monroe’s character walks up the steps to the hotel.

The refurbished lobby features a new chandelier, recreated to match the original one, although with some elegant embellishments. (Ana Ramirez/The San Diego Union-Tribune)

The artisans and laborers who refurbished the lobby relied heavily on historic images to guide them in reproducing its visual feel. More than just a reception area for checking in, the lobby is a tourist destination that for decades has transported visitors back to the Victorian era.

All of the woodwork from the late 1800s was stripped down to its original state and stained to match the color of what the lobby looked like when first built. The hotel also reviewed photos from the late 1800s and early 1900s to accurately reproduce light fixtures of that era, many of which are now affixed to the wood columns. The wall-to-wall carpeting is gone, replaced with decorative wood flooring, with some of the elements coming from as far away as Romania, Rapoza said.

The lobby restoration has taken 18 months to complete, starting February of last year, when it was closed to the public. “A lot of work was done on this to make sure it was done right,” Rapoza said. That’s especially true for the repair and recreation of what were originally 25 stained glass windows. Just four of the original windows, including the 133-year-old coronation window, could be found. Craftsmen spent the last year and a half painstakingly restoring the coronation window, now hanging in the second level of the lobby. All but six of the window’s more than 700 pieces of glass were saved and restored.

Over the next 30 to 60 days, all of the windows will be installed. Also recreated was the original chandelier — albeit with embellishments to enhance the hand-cut crystal pieces. It replaces the previous glass ceiling fixture that had lost its luster over the years. The Crown Room, a historic venue also located in the Victorian building and once a regular destination for brunch, has been closed since the start of the pandemic last year.

However, the Del plans to reopen it for the Thanksgiving, Christmas, and New Year’s holidays. Still under consideration is reopening it more regularly next year for brunch, Rapoza said. Just south of the cabanas building, the former Ocean Towers, now known as The Views, has been fully renovated inside, with all 217 rooms and suites refurbished. A notable enhancement are the all-glass balconies, which provide a clearer view of the beach.

The ground floor rooms in the seven-story building have outdoor terraces, each with its own fire pit. Eventually, the hotel plans to offer bike, surfboard, and rollerblade rentals for The Views area.

The longtime outdoor event space was spruced up with new turf, trees, and landscaping. Lighting was also added to the palm trees. The lawn area is where the ice rink is installed each year during the winter holidays, a tradition that was absent last year because of COVID-19.

The hotel has created a new light show for the upcoming holidays that will be projected on the palm trees near Orange Avenue and synchronized to music every 15 minutes.

At one time responsible for making ice for all of Coronado, the Ice House more recently served as a human resource office until it was reopened a month ago as a museum showcasing the hotel’s historical moments.

Known long ago as a destination for the Hollywood elite and a few former presidents, the hotel has curated photographs of such famous visitors as Babe Ruth, President Ronald Reagan, Frank Sinatra, and Walter Cronkite. Old-timey memorabilia on display include a telephone switchboard box from 1910, an 1891 guest register, and a set of Prince of Wales China that was used in the Crown Room during the April 7, 1920, visit by Edward, Prince of Wales.

Also a historic building, the Power Plant was restored a couple of months ago and now houses meeting space on the second level and the hotel’s engineering department on the first level. There is also room for co-working space in the building. The Laundry Building, built in 1919, still houses temporary offices, but will eventually be repurposed as event space.

Relegated to a dark, lower-level corridor, the retail area is getting an updated look. New flooring that resembles white marble has been added, and the area is considerably brighter and more contemporary looking. The first stores to reopen are Beach House, a specialty home goods store, and Weekends boutique that features a curated selection of casual apparel from a variety of well-known brands. The remaining retail additions are expected to be completed by January.