RECALLING ANOTHER DAY IN INFAMY


An escape with just minutes to spare

Editors note: More than anything, Greg Trevor wants us to know that no one can do anything truly alone. We succeed when we look out for and care for one another. That’s the message he hopes the youngsters on UGA’s campus take from the 20th anniversary of the 9/11 attacks this year.

Trevor, the University of Georgia’s associate vice president for marketing and communications, is a 9/11 survivor and frequently shares his story with UGA students and other groups around the country.

In past years, he’s spent the anniversary speaking at and attending remembrance events and has given tours at ground zero. He has also proposed making 9/11 a national day of discussion where people can come together across their various divides and attempt to find common ground.

Today, on this milestone anniversary, Trevor plans to get off the grid and go on a vacation with his wife and two dogs in the Shenandoah Valley. “I recognize that PTSD and survivor’s guilt will be with me for the rest of my life,” Trevor told The Atlanta Journal-Constitution. “I try to deal with it on a daily basis. There is still a lot of sadness and a lot of loss from that day.”

What follows is an excerpt from an essay Trevor wrote soon after the 9/11 attacks as part of his therapy for PTSD. Versions of the essay have been previously published.

CAPTION FOR BELOW: Greg Trevor, associate vice president for marketing and communications at the University of Georgia, often shares his story with students. (Courtesy of Dorothy Kozlowski) 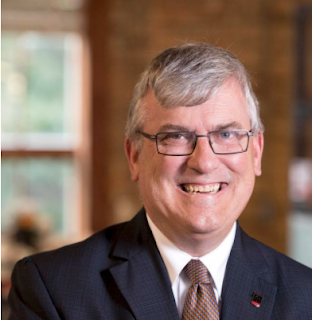 GUEST BLOG / By Greg Trevor via the Atlanta Journal-Constitution--On Sept. 11, my co-workers and I escaped One World Trade Center at 10:18 a.m. The building collapsed seconds before 10:29 a.m. I owe my life to three things: a knit tie; a quick-thinking Port Authority Police officer; and the foresight of the architects and engineers who designed the World Trade Center strong enough to withstand direct hits from jets — and enable an estimated 25,000 people to escape.

When the first of two 767s hit the Twin Towers at 8:46 a.m., I was standing behind my desk on the south side of the 68th floor of One World Trade Center, in the Public Affairs Department of the Port Authority of New York and New Jersey. I was nearly knocked to the floor by the impact of the first plane, which slammed into the north side of Tower One more than 20 floors above me.

I heard a loud thud, followed by an explosion. The building felt like it swayed about 10 feet to the south. It shuddered back to the north, then shimmied back and forth.

Out the window I saw a parabola of flame fall toward the street, followed by a blizzard of paper and glass. Then I heard two sounds: emergency sirens on the street, and phones ringing across the 68th floor — calls from reporters wondering what had happened.

Within a few minutes, we (department leaders) gathered the staff, threw files and notepads into our bags, and prepared to evacuate the floor. It began to fill with grainy smoke. For more than an hour, we joined thousands of fellow World Trade Center workers who patiently descended the emergency stairwells. I wasn’t scared at first. My initial feelings were disorientation and disbelief.

When we entered the stairwell, all we knew was that a plane had struck the building. It didn’t make sense. (How could a plane hit a 110-story building on such a clear day?) Because we were in the stairwell, we didn’t feel the impact of the second plane hitting Two World Trade Center.

I tried to call my wife, Allison, several times by cellphone, but couldn’t get through. Fortunately, I reached my colleague, Pasquale DiFulco, through my interactive pager. Pasquale, who began the day on vacation and was watching CNN, called Allison to let her know I was safe.

He also used his pager to tell us what was really going on. Despite this news, our long walk in search of safety remained calm and orderly. We had conducted regular fire drills, so we knew what to do. Every few floors, we would stop, move to the right of the stairwell and make room for injured people walking down — and firefighters and Port Authority Police officers running up. Then we reached the fifth floor just before 10 a.m. We heard a loud rumble. The building shook violently. I was thrown from one side of the stairwell to the other. We didn’t know it at the time, but Tower Two had just collapsed.

Our stairwell filled with smoke and concrete dust. Breathing became difficult. The lights died. A steady stream of water, about 4 inches deep, began running down the stairs. It felt like we were wading through a dark, dirty, rapid river — at night in the middle of a forest fire. The smartest decision I made that day was to wear a knit tie to work. I put the blue tie over my nose and mouth to block the smoke and dust.

To keep from hyperventilating, I remembered the breathing exercises my wife and I learned in our Lamaze classes. We descended one more flight, to the fourth floor, when I heard someone say: “Oh (expletive), the door’s blocked.” The force from the collapse of Tower Two had apparently jammed the emergency exit. We were ordered to turn around and head back up the stairs, to see if we could transfer to another stairwell. For the first time, I was afraid we wouldn’t make it. I whispered a quick prayer: “Lord, please let me see my family again.” Then I closed my eyes, and made mental pictures of my family’s faces: Allison’s beautiful brown eyes; our 5-year-old son Gabriel’s deep blue eyes and dimples; our 2-year-old son Lucas’ blond ringlets. I remember thinking: Their faces will keep me calm. And if I die, they will be the last thing on my mind.

During this ordeal, Pasquale sent me a series of frantic pages that didn’t go through. 10 a.m. page from Pasquale: Please tel me u r ok Please respond.

10:12 a.m.: Where are you? 2 wtc justcollapsed??? I don’t know how many minutes it took for emergency workers to clear the exit. But when they did, thank God that Port Authority Police Officer David Lim was there. David is a K-9 officer whose partner, Sirius, was killed in the attacks. David was later trapped in the rubble for nearly five hours. David had the presence of mind to figure out a way to get us all turned around and headed back downstairs. Over and over, he shouted: “Down is good! Down is good!”

The emergency exit led to the mezzanine level of Tower One. The mezzanine was filled with dull-beige concrete dust — on the floor, in the air, caked against the floor-to-ceiling windows. It felt like we were walking through a huge, dirty snow globe that had just been shaken. It was even worse when we walked outside, near Six World Trade Center. The plaza was a minefield of twisted metal, covered by a layer of concrete dust several inches thick. I am grateful for that dust, because it means I didn’t see any bodies.

As we were leaving the building, my pager buzzed with a message from Al Frank, a reporter with the Newark Star-Ledger who has covered the Port Authority for years.

I replied a minute later, as we were walking along the outside of Six World Trade: We’ere out of the building. Everyone is fine. Relieved but fatigued, we sprinted down the stairs between Six and Five World Trade, then turned up Church Street and headed north. I looked back at the Trade Center. The upper third of Tower One was on fire.

There was so much smoke and dust, I couldn’t tell that Tower Two had collapsed. We continued walking north toward the Holland (Tunnel). A few minutes later, we heard an NYPD officer shout: “Run for your lives!” We ran north for several blocks. We felt a deafening rumble, followed by a thick cloud of black smoke and brown dust.

One World Trade Center had stayed up for more than 1 hour and 40 minutes after the first attack, enabling thousands of us to escape.

We walked the remaining blocks to the mouth of the Holland Tunnel. Military jets flew overhead. Our clothes, hair and faces still covered with dust, we crammed into Port Authority Police cars, which took us to our temporary offices in Jersey City.

About an hour later, I wrote the first draft of our first statement after the attacks on the only form of communication I had left — my interactive pager:

"... Our hearts and our prayers go out to the families of the countless people — including many members of the Port Authority family — who were killed today in this brutal and cowardly attack. All PA facilities are closed until further notice. We at the PA are doing everything within our power to assist the families of the victims, and to co-operate with federal, state and local authorities to capture the perpetrators of this attack and bring them to justice."

Our department worked out of Jersey City for more than two months — at first, in rotating 12-hour shifts. I returned to ground zero four days after the attacks. The experience was unnerving and humbling — not because of what’s there, but what used to be there. I looked up at the hole in the sky where our offices used to be, and thought about how easily we could have been trapped up there.