AMERICANA / WHY NO MAJOR LEAGUE BASEBALL?


The answer to the headlined question in this blog is because there's a fight in the chicken coop between banty roosters of all stripe pecking, clucking and scratching dust in the air.

But when the dust clears no one outside the friendly confines of the pen knows what the loud cackling was all about.

Baseball's commissioner attempts to shed some light on the issues keeping the current owner lockout in place. Remember it’s the owners that put the lock out in place.

The following letter gives their version of why they did that and how come it is still in place. As for the views of the Major League Baseball Players Association all we need to know about their side of the chicken #@&% is to mull the following: Why did the MLBPA turn down a proposal to increase the minimum wage for baseball players to $700,000 per year. Let that sink in. And, let’s ask these woefully out of touch elitists why $700,000 wasn’t good enough for them when the average fan earns nowhere near that amount per year?

Dear Reader what would you do with $700,000 per year? If we find a rebuttal or an explanation from the players we will post it.

From the desk of Robert Manfred, Commissioner of Baseball: I had hoped against hope that I would not have to be in the position of canceling games. We worked hard to avoid an outcome that is bad for our fans, bad for our players and bad for our clubs.

I want to assure our fans that our failure to reach an agreement was not due to a lack of effort on the part of either party. The Players came here for nine days, worked hard and tried to make a deal. I appreciate their effort.

Our committee of Club representatives committed to the process, offered compromise after compromise, and hung in past the deadline to exhaust all efforts to reach an agreement.

So far, we have failed to achieve our mutual goal of a fair deal. The unfortunate thing is that the agreement we have offered has huge benefits for fans and players. We have listened to the Players Association throughout this process. A primary goal of the Players Association has been to increase pay for younger players. As I have said previously, we agree and share that goal.

We offered to create an annual bonus pool of $30 million for the very best young players. In total, we are offering a 33% raise to nearly two-thirds of Major League players and adding more than $100 million annually in additional compensation for younger players.

The proposal also addressed player and fan concerns about issues like service time and competitive issues. Baseball would for the first time have a draft lottery -- the most aggressive in professional sports. Also, for the first time ever, we agreed to an incentive system to encourage clubs to promote top prospects to their Opening Day rosters.

We also proposed that the first and second-place finishers in the Rookie of the Year voting in each league would receive a full year of service. The MLBPA asked to make free agency more robust. For the first time ever, we agreed to eliminate direct draft pick compensation, a change the MLBPA has sought for decades.

The International Draft would have more fairly allocated talent among the clubs and reduced abuses in some international markets.

We also listened to our fans. The expanded playoffs would bring the excitement of meaningful September baseball and postseason baseball to fans in more of our markets. While we preferred a 14-team format, when the format became a significant obstacle, we listened to the players’ concerns, and offered to compromise by accepting their 12-team format.

Finally, we offered a procedural agreement that would allow for the timely implementation of sorely needed rules like the pitch timer and elimination of shifts to improve the entertainment value of the game on the field. And we agreed to the universal DH. So, what is next?

The calendar dictates that we are not going to be able to play the first two series of regular season games and those games are officially canceled. We are prepared to continue negotiations. We have been informed that the MLBPA is headed back to New York meaning that no agreement is possible until at least Thursday. Currently, camps could not meaningfully operate until at least March 8th, leaving only 23 days before scheduled Opening Day.

We played without an agreement in 1994 and the players went on strike in August, forcing the cancellation of the World Series. It was a painful chapter in our game’s history. We cannot risk such an outcome again for our fans and our sport. The Clubs and our owners fully understand just how important it is to our millions of fans that we get the game on the field as soon as possible. To that end, we want to bargain and we want a deal with the Players Association as quickly as possible. 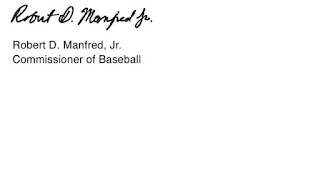