Designer. Inventor. Founding Father. Thomas Jefferson served as the third President of the United States from 1801 to 1809. Among other things, he was the principal author of the Declaration of Independence, facilitated the Louisiana Purchase which nearly doubled the size of America, abolished the slave trade and founded the University of Virginia. 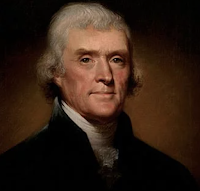 THOMAS JEFFERSON FOUNDED THE UNIVERSITY OF VIRGINIA Jefferson considered education very important in building a good society. He wanted to establish a new institution free of church influences and where students could specialize in new areas not offered at other universities. In 1819, the 76-year-old Jefferson founded the University of Virginia. He was also the principal designer of the buildings. When the university opened in 1825 it was the first to offer a full slate of elective courses and was notable for being centered about a library rather than a church.

HE MADE AN IMPORTANT CONTRIBUTION TO THE LIBRARY OF CONGRESS As president, Thomas Jefferson played an important role in establishing the structure of the Library of Congress. Later when most of the collection of the library was destroyed by the British in 1814 during the War of 1812, Jefferson offered his personal library as a replacement. In January 1815, Congress accepted Jefferson’s offer, appropriating $23,950 to purchase his 6,487 books. On June 13, 1980, the name of the main building of the Library of Congress was changed to Thomas Jefferson Building to honor his contribution.