Finland was named the world’s happiest country for the fourth year running, according to a 2022 United Nations world happiness report.

Let’s enjoy this wonderful country while we can given its bellicose neighbor could cause WWIII any day.

Here are reasons why Finland is so happy, says travelagentcentral.com 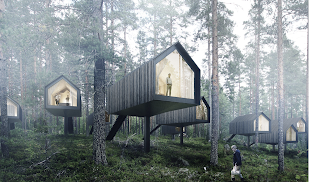 The national Finnish broadcasting agency, YLE, recently featured construction progress on our the first Niliaitta cabins, one piece of the larger accommodation and tourism concept we designed and developed for the Kivijärvi municipality here in Finland. The overall intent with the accommodation concept is to drive tourism to the remote area in a sustainable way that does not impede on the local nature, but rather celebrates it.

2. And the most eco-friendly Finland has tremendous green credentials.

In fact, it ranked top in the 2016 Environmental Performance Index, which handed Finland a rating of 90.68, beating its nearest rival Iceland (90.51), and neighbour Sweden (90.43). The report, commissioned by the Yale Center for Environmental Law and Policy, said: “Finland’s goal of consuming 38 percent of their final energy from renewable sources by 2020 is legally binding, and they already produce nearly two-thirds of their electricity from renewable or nuclear power sources.” Nice one, Finland.

3. Nowhere in Europe has more trees

Finland has more forest per square mile than any country in Europe, and the 11th most in the world. It’s amazing there’s room for anything but trees, to be honest, as the nation is 73 per cent firs, birches and oaks (that’s nothing compared to Suriname, top of the list, which is 95 per cent forest).

4. Its capital couldn't be greener

Helsinki has embarked on an ambitious project to make motor vehicle ownership obsolete by 2025. Harnessing the power of new technologies, the authorities want to create an on-demand public transport system that will be so good nobody needs a car. As with other Scandinavian cities, Helsinki long ago promoted pedal power as a way of getting around. The city now has 2,400 miles of cycle lanes, which have been enthusiastically embraced by locals.

Finland’s nickname is the Land of a Thousand Islands. Pah. The nation boasts a few more than that; 179,584 to be exact, making it second only to Sweden in the global island ranking.

Not the biggest. That’s Lake Vanern in Sweden, of course. But at 1,700 square miles in surface area, Lake Saimaa is still remarkably big – certainly the largest of those that dot the Finnish landscape. It is home to the Saimaa Ringed Seal – although you will be lucky to spot one of these endangered freshwater beasts. They number a mere 320 in total, and are only found in the lake. Still, you can take a pair of binoculars and try. The waterside is most easily reached via the small city of Lappeenranta – 140 miles north-east of Helsinki.

7. It's a tolerant place

According to The Legatum Prosperity Index, which ranks countries according to a range of criteria, including personal freedom, based on access to legal rights, freedom of speech and religion and social tolerance, Finland is the ninth most tolerant nation in the world. The UK is 15th. 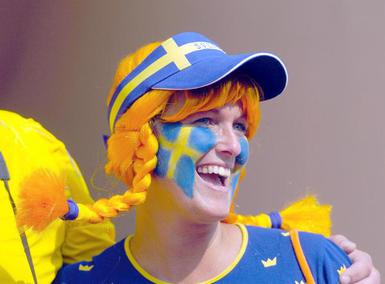 The above might explain why it’s also one of the best countries in the world for gender equality. Finland ranks third, according to the World Economic Forum’s Global Gender Gap Report, behind only Iceland (first) and Norway (second).

Tolerance and gender equality are great, but Finland also has Father Christmas. He lives in Lapland, of course, and can be visited all year. Lapland is arguably the real Finland - a wilderness region that is home to the nomadic Sami and their reindeer. In summer there are great hiking trails and white water rafting. In winter you can ski, go ice fishing, snowmobile along forest trails or mush a husky dog team.

It seems the Finnish live their lives by some pretty admirable guiding principles, but that’s not even the half of it. Arguably more important is the fact that the Finns consume more coffee than anywhere else in the world - 12kg per capita per year, a hefty 2.1kg more per head than Norway, in second place.

11. And stripping off for a sauna

Up for baring it all in public? You haven’t sampled the life of a Finn unless you’ve done so at a sauna. There are 5.4 million people in Finland, and three million saunas – such is the national obsession with communal cleansing. The Yrjönkadun Uimahalli sauna and pool in Helsinki occupies a classic 1920s Art Deco building. Or head to the lakeside town of Kuopio to try the world’s largest smoke sauna at Jätkänkämppä Lodge, possibly accompanied by live accordion music.

Ever wondered which countries provide the most rapid Internet experience? Of course you have, and of course Finland is in the top 10.

13. And the most spectacular lights display in the world

Finland is one of the best places on earth to observe the Northern Lights. Of course, never travel *for* the Aurora Borealis, because you’ll only be left disappointed, but if you just so happen to be in Finland over the winter months, there’s a decent chance you’ll witness the mystifying light display.

14. Helsinki has one of the world’s loveliest cathedrals…

The Tuomiokirkko (helsinkicathedral.fi) – a neoclassical wonder in white, capped with domes of green, which sits at the heart of the Finnish capital. It was built between 1830 and 1852 in forelock-tugging tribute to Tsar Nicholas I, but lacks much of the pomp and circumstance which can characterise Russian churches, trading instead on a quiet architectural grace. It looks colossal from the outside, rearing above Senaatintori (Senate) Square, but feels rather smaller within – even though it can seat some 1300 worshippers.

15. And Finns have surprisingly good beaches

Not in the very centre, admittedly, where Helsinki is still very much a port. But look around, and there are plenty of strips of sand nuzzled by the Baltic. One is found 10 miles to the east in Aurinkolahti. That the name of this outer suburb – which translates as “Sunny Bay” – was recently changed from “Mustalahti” (“Black Bay”), in a marketing exercise designed to pull in potential residents, does not detract from the broadness of its main beach. It lives up to its moniker too – at least in July and August, when Helsinki lifts itself to a temperature of 21C, and the sea warms to a just about toe-dippable 16C.

No, really. The border between Finland and Sweden is also a time-zone marker. Finland is two hours ahead of Greenwich Mean Time, Sweden just one hour. This means that if you hop the frontier from east to west, you “regain” a full 60 minutes of your life – good fun on December 31, when you can ring in the new year twice. One possible location for such back-to-the-future machinations is Karesuvanto, a village in Finnish Lapland which perches on the bank of the River Munio, directly across from its Swedish counterpart Karesuando. Walk over the bridge between the two and, hey presto, you’re Marty McFly.

17. Last but not least, it's the safest country on Earth

According to the 2018 Travel Risk Map, which assesses the world across three categories - medical risks, security and road safety - Finland has the lowest overall threat level. A lovely place to hunker down and hope everything just blows over.