THE FOLLOWING IS A PLOT SUMMARY:

"The Portrait" is the story of a young and penniless artist, Andrey Petrovich Chartkov, who stumbles upon a terrifyingly lifelike portrait in an art shop and is compelled to buy it.

The painting is magical and offers him a dilemma — to struggle to make his own way in the world on the basis of his own talents or to accept the assistance of the magic painting to guaranteed riches and fame.

He chooses to become rich and famous, but when he comes upon a portrait from another artist which is "pure, faultless, beautiful as a bride" he comes to realize that he has made the wrong choice.

Eventually, he falls ill and dies from a fever.

The first part of the story takes place in nineteenth-century Saint Petersburg, Russia and follows a penniless yet talented young artist, Andrey Petrovich Chartkov. One day, Chartkov stumbles upon an old art shop, where he discovers a strikingly lifelike portrait of an old man whose eyes “stared even out of the portrait itself, as if destroying its harmony by their strange aliveness.”

On an inexplicable impulse, Chartkov uses the last of his money to buy the portrait, which the art shop's dealer seems glad to be rid of. Chartkov returns to his shabby apartment and hangs up the painting, but is so haunted by the old man's stare he covers it with a bed sheet before going to bed.

However, “it seemed to him that amidst the dream there had been some terrible fragment of reality.”

Shortly thereafter, Chartkov's landlord arrives with a police inspector, demanding the rent. Chartkov is at a loss for what to do until the clumsy inspector accidentally cracks open the portrait's frame, revealing a pouch filled with one thousand gold sovereigns.

Dumbfounded, Chartkov pays what he owes and begins making grand plans for the projects he can complete with his newfound wealth, recalling the encouraging words of his old mentor to “ponder over every work” and nurse his talent, while ignoring the superficial, “fashionable” styles of the times.

However, Chartkov's plans quickly go up in smoke, and instead he uses his riches on lavish items and an ad in the papers. He soon uses his new apartment on Nevsky Prospect to host the customers brought in by the ad.

At first, Chartkov attempts to paint his subjects in his own style, as his mentor had advised, but he soon falls into more “fashionable” styles in order to keep his customers happy.

Though his “doorbell was constantly ringing,” his art becomes choked, and he resorts to “the general color scheme that is given by rote.”

His reputation spreads and he is showered with countless compliments and immense wealth, but as the narrator remarks: “fame cannot give pleasure to one who did not merit it but stole it.”

Many years pass, and Chartkov achieves such a high reputation he is asked by the Academy of Arts to examine the work of another prominent artist, one who devoted his life to studying art in Italy.

When Chartkov arrives at the gallery, he is struck by the painting, which he describes as “pure, immaculate, beautiful as a bride.” In this artist's work Chartkov realizes what he missed out on and is so struck he bursts into tears and flees the gallery. At home in his studio, Chartkov attempts to revive the old talent he once had but inevitably fails, and in a fit of anger rids himself of the portrait of the old man and begins buying up “all the best that art produced” and bringing it home to tear it to shreds.

His madness eventually manifests itself into a physical illness, and Chartkov dies, haunted to the end by memories of the horrible portrait.

The second half of “The Portrait” opens several years after the events of Part I, at an art auction is held at an old nobleman's house at which the sinister portrait is put up for sale.

In the midst of the bids, a young man appears who claims he has “perhaps more right to this portrait than anyone else.” He promptly begins telling the audience his story.

His father was an artist who worked in Kolomna, a tired, “ashen” part of St. Petersburg, which was also the home of a strange moneylender. This moneylender was rumored to be capable of providing “any sum to anyone,” but bizarre and terrible events always seemed to happen to those who borrowed from him.

Specifically, his borrowers developed qualities contrary to their previous personalities: a sober man became a drunkard; a fine young nobleman turns on his wife and beats her.

Many of his customers even died unnaturally early deaths. One day, the moneylender comes to the artist asking for his portrait to be painted, and the artist agrees, grateful for the chance to paint such a peculiar subject.

However, as soon as he begins painting the moneylender's eyes, “there arose such a strange revulsion in his soul” he refused to paint anymore. Despite the moneylender begging him to finish, the artist holds firm, and the moneylender dies shortly thereafter, leaving the portrait in the artist's possession.

Inexplicably bizarre events begin happening in the artist's life. He becomes jealous of one of his pupils (revealed to be the young Chartkov), attempts to sabotage him, flies into rages, chases away his children and comes close to beating his wife. To make amends, the artist attempts to burn the portrait, but a friend stops him, taking the painting for his own instead.

After witnessing its evil nature, his friend eventually passes the portrait to his nephew, who sells it to an art collector, who hawks it to someone else, and eventually the portrait's trail is lost. The artist feels immense guilt over the evil piece of art and makes his son promise to track it down and destroy it. This is the reason which brought the young man to the art auction. However, once he concludes his story and his audience turns to examine the portrait, they find it missing: someone must have taken it while they were listening to the young man's story.

They wonder if they had seen it at all. 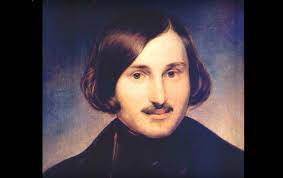 ABOUT THE AUTHOR. Nikolai Gogol, [left], the Ukrainian-born writer is known as one of Russia's greatest authors. Works like The Overcoat and Dead Souls launched Gogol into the upper echelons of Russian writers, yet his greatest masterpiece, a continuation of Dead Souls, was cut short by his tragic death at age 42 in 1852.