THE FOODIST / WAIT, THAT STOLI’S MADE IN LATVIA

GUEST BLOG--By CNN Business--Plenty of people are mad at Russia right now, and for good reason. But as is often the case, some Americans are loudly misdirecting their rage.

Maybe it makes you feel better, but chucking a case of Stolichnaya or Smirnoff into California’s Russian river ain’t gonna do much for the resistance in Ukraine.

Here’s the deal: Officials in Ohio, Utah and New Hampshire have called on liquor stores to remove Russian-made or Russian-branded products – namely, vodka.

Ohio Governor Mike DeWine asked the state’s nearly 500 liquor stores to “cease both the purchase and sale of all vodka made by Russian Standard, the only overseas, Russian-owned distillery with vodka sold in Ohio.”

Their hearts are in the right place, but the effect is useful as the “freedom fries” movement of the early aughts.

Problem is if you look closely, many of the top-selling vodka brands that trace their origins to Russia are now distilled in multiple countries, including the United States.

Stoli, for one, is Russian only in name. The liquor is actually made in downtown Riga, Latvia, and the company’s headquarters are in Luxembourg — a member of NATO which has spoken against the Russian invasion. Stoli Group said it “unequivocally condemns the military action in Ukraine and stands ready to support the Ukrainian people, our teams and partners.”

Ready to smash that bottle of Smirnoff on ground and light it on fire? Try taking a deep breath, and maybe swallow a shot, instead. Although it traces its heritage to 19th century Russia, Smirnoff has long been owned by British spirits giant Diageo and is manufactured in Illinois. Yikes, last we looked the Fightin’ Illini were on our side.

Less than 1% of vodka consumed in the United States is produced in Russia, and in fact more than half of all vodka consumed domestically is made right here in the U.S. of A. Here’s a group of modern day patriots imitating the fabled Boston Tea Party back in the ‘70s (1770s) instead this gang is pouring Stolichnaya products into Shitt Creek obvious to the fact Stoli is made in Riga Latvia and its HQ is in Luxembourg (a NATO nation). Russian Standard is one of the few vodka brands that is actually Russian. 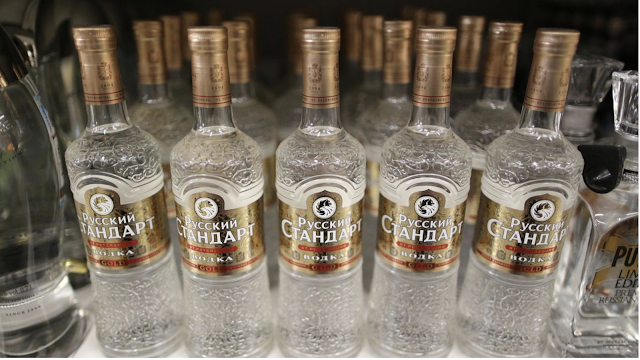 Russian Standard is one of the few vodka brands that is actually Russian.